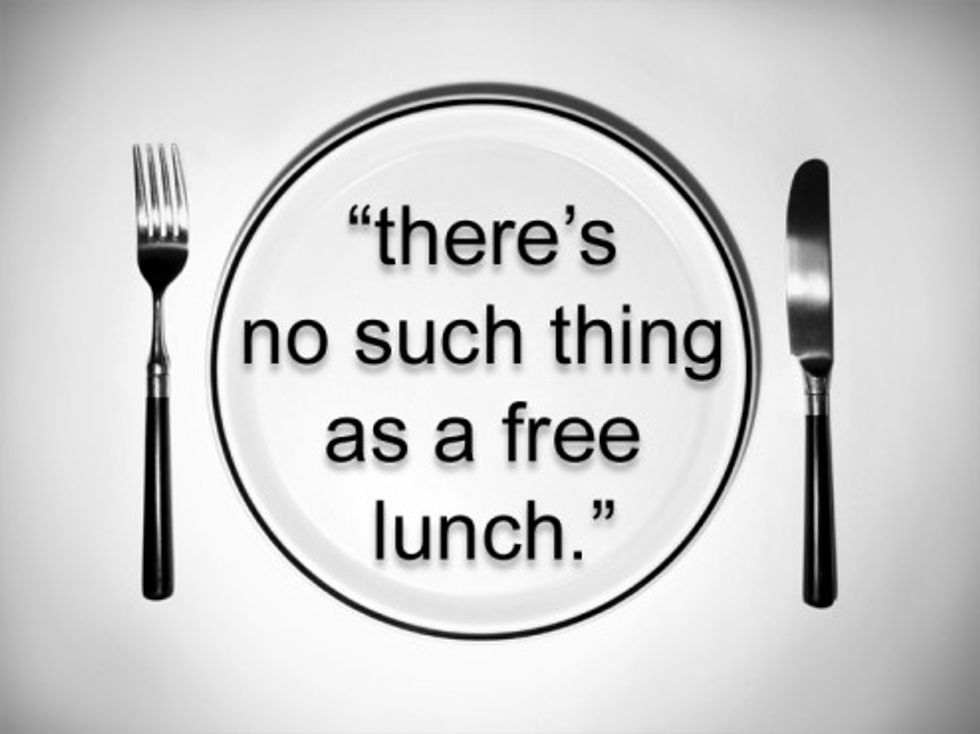 So, let's say you're a lunch lady. Lunch person, whatever. Just go with it. Now, let's say you're a not-gender-specific lunch person working in Missouri. Still with us? Now, because you're in a red state, you have a ridiculously high percentage of poor kids going through your lunch-scape. Let's say you're doing your lunch-providing in, oh, say, Webster school district, where a remarkably sad45.8% of the kids coming through your lunch line are too poor to afford lunch and have to eat the entirely non-complete-meal that poor kids get*, which appears to be a cheese sandwich and a carton of milk. (Dairy is good for you shut up you don't need anything else). Having fun yet?

Let's further postulate, Wonkettonians, that you think feeding poor kids inadequate food in front of their peers, thereby starving them AND making them feel singled out, is a bad idea. What would you do? Perhaps you'd do the right thing and FEED THE KID THE REGULAR GODDAMN LUNCH:

Dianne Brame gave free hot lunches to a fourth-grader for two months after his eligibility ran out, KSDK reported. Brame said the child’s mother doesn’t speak English and might not have understood the paperwork involved for the compensated lunch program.

The child was supposed to be “reduced” to a cheese sandwich and carton of milk for lunch. But worried that he might be teased by other children for the paltry meals, Brame continued to feed the child the normal menu at Hudson Elementary School.

Dianne Brame sounds pretty cool, yes? Just the sort of lunch person you fancy yourself to be, all poor-helping and such. So, of course she was rewarded for her good behavior, right?

One of her co-workers reported her to Chartwells, the food service vendor for the school, and Brame was given the option of being "demoted and transferred" or released from her employment. According to MSN, she "could not work at another school because she walks to work" since losing her car after the death of her husband last spring.

YOU GUYS THIS IS LIKE AN AFTER-SCHOOL SPECIAL PLOT WHAT THE HELL. First she feeds the poor kid. Then one of her coworkers, who yr Wonkette likes to imagine is twirling his mustache in a dastardly fashion, reports her to the evil for-profit food service vendor (whose motto is, no lie, "eat, learn, live." please go look at their website now because it is ridiculously sincere and full of large pix of vegetables). Said evil for-profit vendor promptly fires her. She is offered another position but can't get there because walking to work because no car because husband died.

Good Lord Chartwells and Missouri and Webster Public Schools you are kind of awful. It is like you are in a race to see who can be more awful! Guess what? YOU ALL WIN. Know why? Because some or all of you are just stone cold misusing federal funds that are supposed to help the poor kid we started talking about ages ago before the jump. Allow, if you will, a moment for yr Wonkette to get downright wonky. You see, there are nutritional requirements for school lunches. Period. Remember the food pyramid? Now there's the food plate, or pie. We're not sure what it is, actually. With the new plate/pie/simon game from the 1980s graphic, kids get healthier food, like whole grains and fruits and veggies offered every day. Now, if one is a child of the poorer persuasion, does this mean you get unhealthy food, or no food? NO! You get a goddamn well-balanced nutritional meal and the federal government reimburses the school. SOCIALISM IS ALREADY HERE BITCHES.

There's a silver lining here for Ms. Brame, as she was ultimately rehired but only on the condition she attend conflict resolution classes with her supervisor (WTF) and has been briefed on "official policy"  - which is that poor kids get the crappy cheese/milk lunch they are not supposed to be getting. Everyone in this story except awesome hero lunch lady and sometimes-fed poor kid sucks.

*Is this legal? In fact, it is not! But surely this is the kind of "illegal" for which there are no consequences, right? Actually, there are (!). The state department of education can take back the misused funds on behalf of the feds! Would Missouri do this? Eh, probably not because "Missouri." You can't have kids growing up thinking lunch is free.