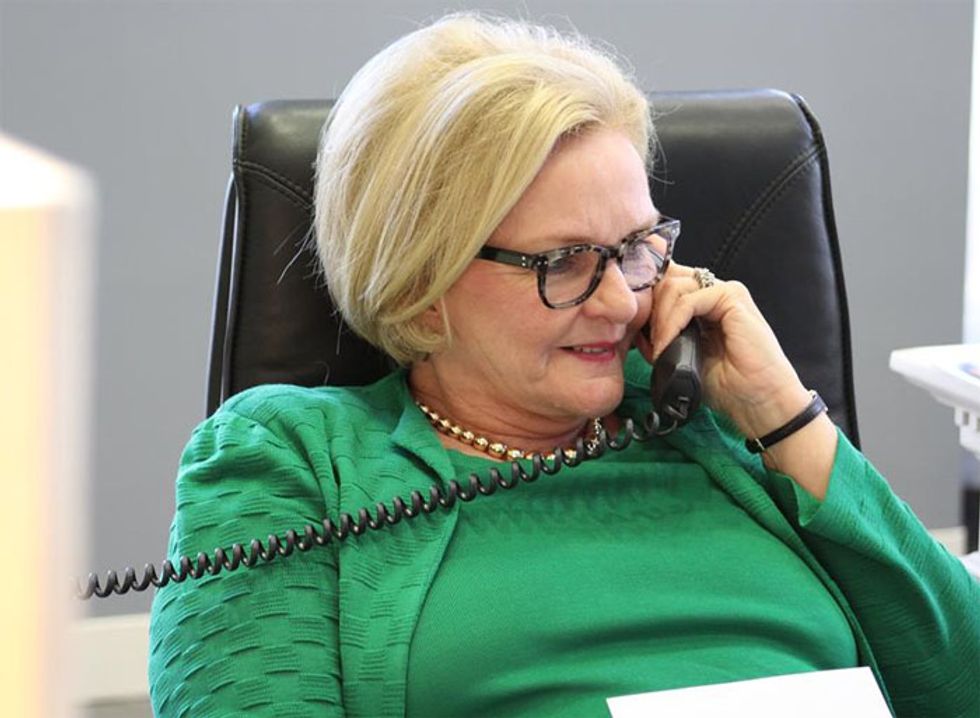 What's that long curly wire thing coming out the end of her phone, though?

So you know how Donald Trump and the Republicans keep fibbing that all the insurers are fleeing the ACA and its health insurance marketplaces are in a "death spiral" (which is not actually the case, really). While it's true that some insurance companies have pulled out of some areas, the number of counties left with no insurance options is quite small -- although in Tennessee, for instance, things are not so good, as FactCheck.orgacknowledges:

the state’s insurance commissioner, Julie Mix McPeak, said last August that the state’s ACA market was “very near collapse.” Matters have grown worse since, when Humana announced it would cease offering ACA policies in 2018. That would leave people in 16 of the state’s 95 counties without any ACA option next year, unless some other insurer steps in.

The FactCheck article points out, however, that Tennessee's situation is not typical; other states are actually experiencing growth in the marketplaces. And now, just to demonstrate that maybe there are better ideas than eliminating coverage for more than 24 million Americans and encouraging cheap insurance that doesn't really cover anything, Senator Claire McCaskill is offering -- get this! -- a market-based solution for those relatively few areas where insurers may pull out of the marketplace for individual plans altogether: She's introducing a bill that would allow people in such counties to purchase health insurance on the Washington DC exchange. The Missouri Democrat is basically borrowing an idea from the Republican playbook -- Rs have called for health insurance to be sold across state lines (the problem there would be that the market would rush to states allowing the crappiest coverage possible). McCaskill's bill, on the other hand, is designed to patch a particular short-term problem in certain insurance markets, providing a fallback for consumers whose local options have dried up due to the vagaries of the insurance business.

would let individuals in counties with no insurance options on the individual Marketplace purchase insurance through “DC Health Link” where most Members of Congress and congressional staff purchase insurance. After passage of the Affordable Care Act, Senators, Representatives, and staff were removed from the insurance program available to federal employees, and required that they purchase their coverage through exchanges like the rest of the country.

Members of Congress, and their staffs, have the option of buying insurance on the DC exchange with the same subsidized plans available to small businesses; it's not altogether clear whether McCaskill's plan would allow individuals to use that model, or simply have them purchase plans similar to what individuals living in DC would purchase, where any subsidy would be keyed to their income. Either way, purchasers would be able to get insurance again without losing the ACA's essential health benefits or its protections for people with preexisting conditions.

We really ought to try this one weird trick.

And no, it's not really the best solution, which would be Medicare for All, or at the very least a public option. But it's not intended to be a universal solution: It's clearly meant as an answer to those who see problems in the way the ACA works and insist the only solution is to toss the whole system, even if that means millions would lose their coverage. Destroy Obamacare? Why not fix the parts that need fixing instead? Oh, look, here is one creative solution for one problem area. It even lets people buy insurance across state lines! Now, how about we fix this thing and help people? Bet there are other creative solutions to other problems in the ACA, too!

McCaskill has done something very smart here for the healthcare debate, putting out a real solution to one problem area in the ACA. It's a hell of a nice starting point, and demonstrates that the choice isn't blowing up the ACA or keeping it exactly as it is. Now all we have to do is wait for Republicans to explain that selling insurance across state lines (from an exchange that's good enough for Congress) can never work, now that a Democrat has proposed it.

Now let's take a break until the 6 p.m. reporting witching hour, and call this your OPEN THREAD.

Yr Wonkette is always in search of creative funding solutions, too, like asking you, the reader, to give us money. Get to it, bucko: click the "Donate" clicky or we'll make Louis Gohmert your doctor.