Mitch McConnell: No Recess Until You Finish Taking Away Americans' Healthcare 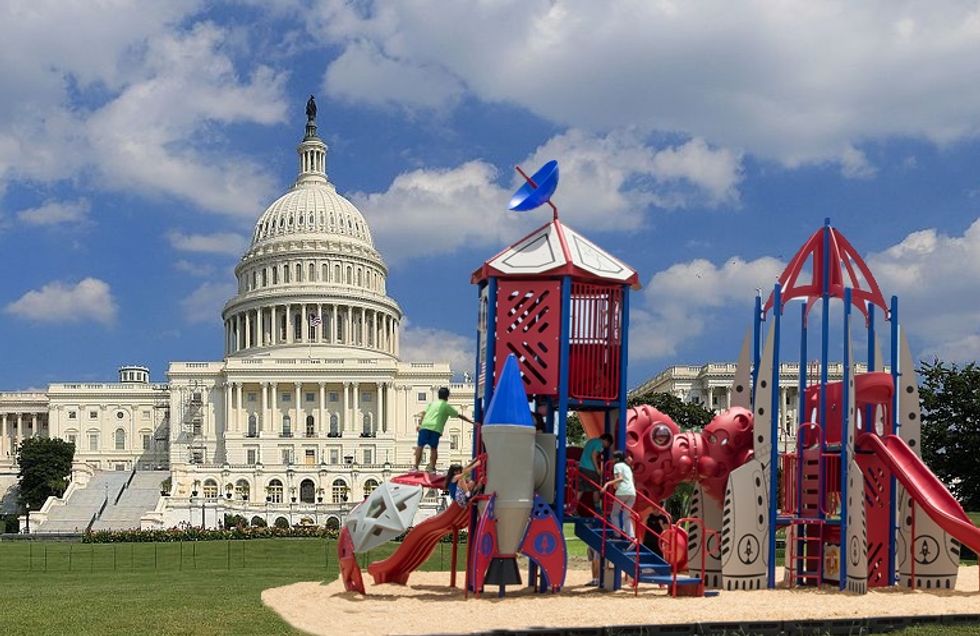 And no ice cream until you pass tax cuts

Mitch McConnell is serious about at least looking like he's going to kill Obamacare, and has announced the Senate's August recess will be delayed by two weeks so it can catch up on the important work of leaving tens of millions of Americans without health insurance, because those darned Democrats keep preventing Republicans from agreeing on whether the bill should be merely brutal, horrible, and deadly to the poor, or extra-brutal, double-horrible, and mega-deadly to the poor. Also, McConnell is astounded that Democrats haven't confirmed Donald Trump's first wave of judicial nominees after a whole two months, the laggards.

“To provide more time to complete action on important legislative items and process nominees that have been stalled by a lack of cooperation from our friends across the aisle, the Senate will delay the start of the August recess until the third week of August,” McConnell said.

After all, during McConnell's first two years as majority leader, Republicans rushed to confirm a whopping 20 Obama judicial nominees. Beyond killing off the nation's progress in reducing its uninsured rate, McConnell also wants to pass a defense authorization bill and raise the debt ceiling, which is now a Republican priority instead of a reason to threaten shutting down the government.

And damn it, Mitch McConnell has had it with all the Democratic obstructionism making Republicans unable to agree on a health care bill. It's not entirely clear what cavalcade of horrors McConnell will dump into the latest Senate version, which like its earlier incarnation is being written in such complete secrecy that Senate Republicans are pretending there isn't even a draft yet, as Vox explains. Maybe there is, maybe there isn't. Who said it was any of your business? Yeah, they released a draft last month, and the CBO scored it, and it's wildly unpopular, but thanks to Republican mind magic, that draft has ceased to be already, as Texas Senator John Cornyn tweeted last Friday:

How can Democrats oppose a bill that doesn't exist yet? Silly Democrats! Now get all these wheelchairs out of my office. People in the wheelchairs? There's no bill, so there's nothing to protest, so Cornyn doesn't see any protesters.

As Vox explains, this is the niftiest of technically correct wordplay, since what the Senate is working on in secret is actually an amendment that would eventually take the place of the House's Killing-Obamacare bill:

Yes, it’s technically a discussion draft that has not been filed for a vote. But it’s a bill. It is 145 pages that the Senate could take up and pass, if Republican leaders had the votes. The CBO itself refers to it as “the Senate bill” in its analysis.

So you see, if there's no bill, there's nothing for conservatives and "moderates" to disagree on, although -- wouldn't you know it -- there's still something to blame Democrats for "obstructing." And those silly protesters are protesting nothing, you see!

A staffer with Senator Burr just told the protesters here that there is no bill for them to protest pic.twitter.com/1fkQ31smmg

So what's in the bill that doesn't exist, and which will apparently manifest itself, by magic, later this week, probably Thursday? Vox says the basic outlines are likely to be similar to the Medicaid-gutting abomination that was unveiled last time, because there's little room to maneuver to get support from both conservatives and "moderates" who came out against the last version. The Washington Post says the hot new feature is Ted Cruz's "Consumer Freedom Act," an evil tweak to individual plans sold in the exchanges. Cruz wants to let states allow insurers to sell plans that eliminate the ACA's essential health benefits and protections for people with preexisting conditions, as long as each company sells at least one plan that has all the Obamacare goodies, which would split the market for private insurance into one group of junk insurance plans that are cheap and cover very little, and another that's purchased only by older, sicker people. To help forestall a death spiral for the more expensive full-coverage plans, McConnell is considering not eliminating all of the taxes in the ACA -- at least not right away:

McConnell is prepared to preserve two of the Affordable Care Act’s existing taxes on individuals earning more than $200,000 annually and couples earning more than $250,000 for several years, according to multiple Republican lawmakers and aides briefed on the plan. One is a 3.8 percent tax on investment income, and another is a 0.9 percent tax on wages and self-employment income.

By keeping these two taxes in place for anywhere between five and seven years, according to several Republicans, the federal government could steer more money to a stabilization fund that could to help offset consumers’ health care costs while the new GOP plan goes into effect.

Why, yes, the Senate's Obamacare repeal will make people get sick and die. This is a surprise how?

Why, yes, that IS exactly the same delay-the-worst-effects strategy the earlier draft took toward the deepest Medicaid cuts, an attempt to kill Obamacare then try to hope one or two election cycles will be long enough for voters to forget who screwed them.

The next variation on the Republican healthcare bill -- which doesn't exist, remember -- is slated to slouch toward release Thursday, with an expected Congressional Budget Office score by next Monday. If it includes the Cruz amendment, don't expect the CBO to be delighted:

Douglas Holtz-Eakin, a former CBO director, said it appears that Cruz’s amendment would send all of the young, healthy people who are cheaper to cover into one insurance pool — and leave sicker, older people “in a glorified high-risk pool” [...]

Holtz-Eakin said he would expect insurers to flee the exchanges even faster than they are under current policy, driving up premiums and forcing the federal government to increase subsidies to keep up with the skyrocketing rates.

But just look how cheap the crappy no-frills insurance would be for people who are currently young and healthy. If they never get old or sick, they'll be in great shape!

Yr Wonkette is supported solely by reader donations, and we'll be here all August. Please click the "Donate" clicky!