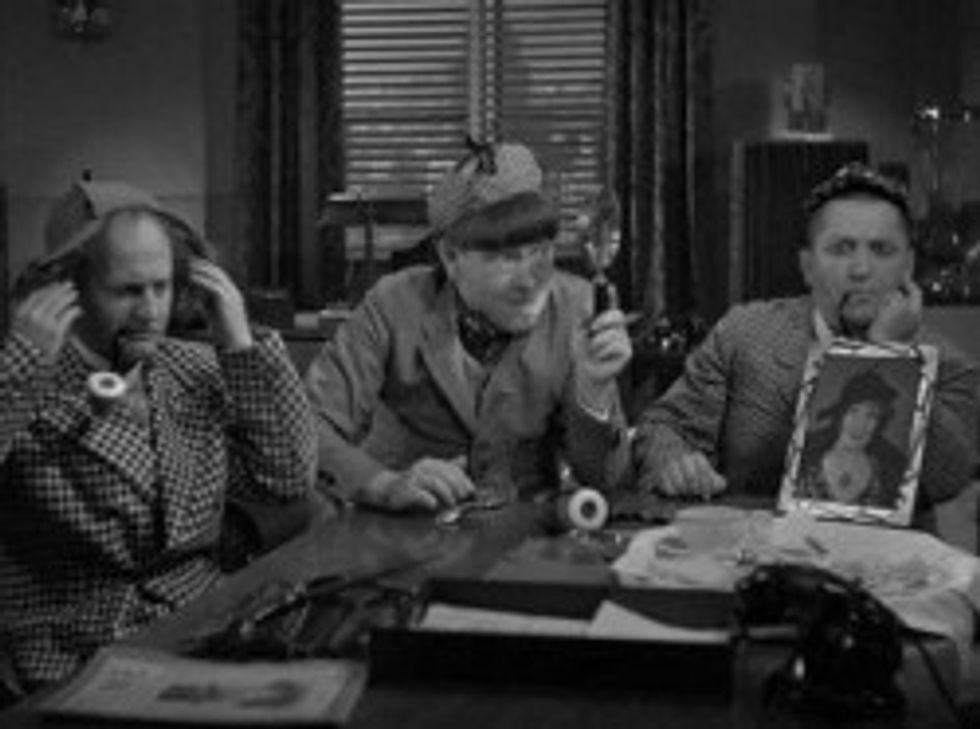 There are some secret tapes of Mitch McConnellonly talking, don't be gross -- and it appears the man is worse than we ever thought, in the how is he even able to dress himself much less be a Senator? way. When Ashley Judd said she was thinking hard about a possible run for Mitch's seat, McConnell and his opposition research team went into action:

"They want to fight? We're ready," he declared. McConnell was serious: Later that day, he was huddling with aides in a private meeting to discuss how to attack his possible Democratic foes, including actor/activist Ashley Judd, who was then contemplating challenging the minority leader. During this strategy session—a recording of which was obtained by Mother Jones—McConnell and his aides considered assaulting Judd for her past struggles with depression and for her religious views.

McConnel's crack team of Super-slueths, Moe, Curley, and Shemp, er um Phil, Josh, and Jesse dug deep into all things Ashley Judd. Jesse apparently had the brilliant idea that he could suss out the skinny on Ms. Judd through the brilliant tactic of reading her autobiography, which was really, really hard for Jesse, because you just know he has to move his lips when he reads to sound out the words. And what "nuggets" as they aptly called them, though probably not for the reasons they think, did they find?

"I refer to [Judd] as sort of the oppo research situation where there's a haystack of needles, just because truly, there’s such a wealth of material." He ran through the obvious: Judd was a prominent supporter of President Barack Obama, Obamacare, abortion rights, gay marriage, and climate change action. He pointed out that she is "anti-coal."

But the McConnell gang explored going far beyond Judd's politics and policy preferences. This included her mental health. The meeting leader noted:

She's clearly, this sounds extreme, but she is emotionally unbalanced. I mean it's been documented. Jesse can go in chapter and verse from her autobiography about, you know, she's suffered some suicidal tendencies. She was hospitalized for 42 days when she had a mental breakdown in the '90s.

Well, yes, that is sad. Who amongst us did not suffer some Suicidal Tendencies in the '90s? Their Suicidal for Life cd was just crazy. BUT OH MY GOD, what is all this other? Supporting gays and Obamacare and even the dark lord President himself, climate change research, pro-choice and anti-coal? She sounds like -- could it be? A DEMOCRAT? That's unpossible! And also it is too bad that she has decided not to run?

Also keep in mind that today McConnell vowed to filibuster the bill that would require background checks for gun purchases, so he is a hypocrite. With no background checks, one might think the Senator wants anybody, even crazy kooks and open president-supporters like Ashley Judd to be able to buy guns!

And what are these "religious views" our intrepid back-story nugget scoopers discovered?

I still choose the God of my understanding as the God of my childhood. I have to expand my God concept from time to time, and you know particularly I enjoy native faith practices, and have a very nature-based God concept. I'd like to think I'm like St. Francis in that way. Brother Donkey, Sister Bird. [says Ashley Judd's biography]

Laughter erupted again, with one guy in the meeting exclaiming, "Brother Donkey, Sister Bird!" The group didn't seem to realize that Judd was referring to well-known stories about St. Francis, who once preached a sermon to birds—"my little sisters"—and who referred to his own body as the "Brother Donkey." (In her book, Judd identifies herself as a Christian and often refers to church and prayer.)

With his comrades laughing about Judd's reference to donkeys and birds, the chief presenter remarked, "That's my favorite line so far. Absolute favorite one so far."

Huh. So, Ashley Judd is very well informed on the hagiography of Saint Francis of Assisi, who, it is also well known, called every animal his "brother" or "sister" and that is just completely hilarious? Makes one wonder if they are aware of the significance of the current Pope's name? Why do you hate the Pope, Mitch McConnell?

These aides McConnell huddles with also go on and on and call her a carpetbagger of some sorts, from Tennessee? She has lived there. Or Scotland? She has also lived there and married a fancy racecar driver from there so obviously she should never ever be in politics in Kentucky. How come they didn't seem to pick up on the fact that she is a notorious thespian? Whatever, they are dumb.

And they are "mad" or "creating diversions" over the fact that the world knows they are dumb now too:

The FBI has been asked to look into whether Senate Republican Leader Mitch McConnell’s campaign headquarters was bugged after a recording of a private campaign meeting surfaced in a liberal-leaning magazine.

McConnell campaign manager Jesse Benton said his staff is working with the FBI because of what he called “Watergate-style tactics” to bug the office.

Reckless speculation time - who else thinks Jesse is totally the one who gave Mother Jones the tape? Say it ain't so Shemp!