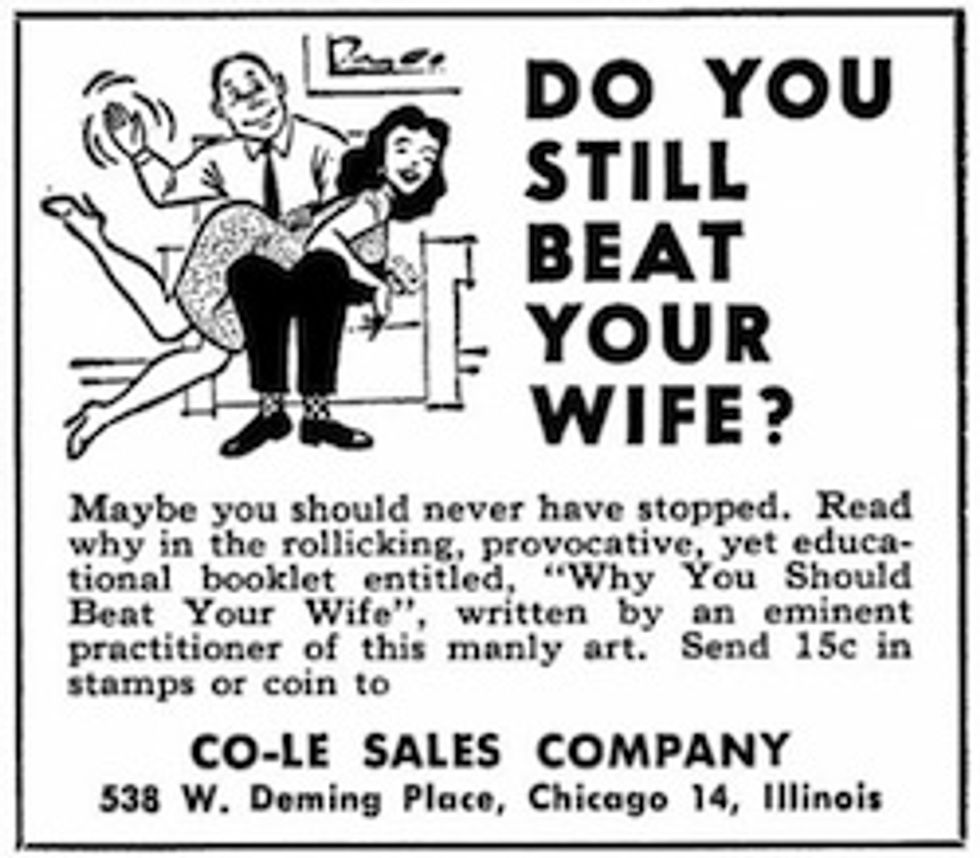 Matt Bevin seems like a real nice guy. A graduate of MIT --except that he isn't but whatev, that's just, like, semantics, man -- he is challenging Kentucky Sen. Mitch McConnell from the teabag wing of the Republican Party because he thinks McConnell is a giant vagina of "empty rhetoric" for not already shutting down the government to stop Obamacare. And also, according to Bevin's list o' grievances, for voting to make Ruth Bader Ginsburg official badass of the Supreme Court, talking to Sen. Barbara Boxer that one time, and looooooooving abortion. (Yeah, we had to snort milk out of our noses on that one too.)

Still, we do love ourselves some good Republican infighting, especially when it means the wingnuts are getting hit from the right for being insufficiently wingnutty, so we are going to sit down with our bowl of popcorn and enjoy this latest little turd-flavored gem from Bevin:

"I think the Violence Against Women Act -- first of all, I don't know anyone who is a proponent of violence against women," Bevin said. "But there are certain provisions in the latest VAWA that were attempting to broaden it so it wasn't just women. And there is a way to go about these things. My biggest issue is there are certain portions of that Act that are unconstitutional, and fly in the face of constitutional precedent. Trying to fix a problem with another problem is not a solution. And that is the case here."

"It is in violation of the United States Constitution," Bevin told TPM. "It has nothing to do with my belief that women shouldn't be protected. I'm married and I have 6 daughters. This is a real problem in America. It exists. I'm very sensitive to this issue."

Ah ha! Well, nothing says "I oppose domestic violence" like having a lady wife and six little lady daughters. Nothing except maybe supporting legislation to fight domestic violence? But hey, when you are trying to win the rotted hearts and addled minds of the Republican primary voters of Kentucky, you have to distinguish yourself from your opponent somehow, right? Which is why Bevin is touting his hypothetical opposition to VAWA, unlike Mitch practically-a-freakin'-Democrat McConnell, who actually in-real-life-with-votes opposed VAWA but is pretending that he didn't because he would like the women to vote for him pretty please and not that "empty dress" Democrat Alison Lundergan Grimes.

Usually, we would full-on clutch our pearls and get our panties in a twist and reach for the smelling salts and nap on the fainting couch and maybe even get downright HYSTERICAL about what a tremendous douchehat this Matt Bevin fellow is, and how his comments exemplify everything that is wrong with the Republican Party and perfectly encapsulate its ongoing War on Women and why we can't have nice things and why we need more progressives in the Senate, and also too more women, but you know what? If there is anything we learned in 2012 -- you know, besides that Ann Romney hates YOU PEOPLE and Michigan's tree height is perfect -- it's that when Republicans get all teabaggy on each other, and primary voters choose the more extreme candidate, that more extreme candidate ends up, you know, losing in the general. And we like that very much.

So please, Matt Bevin, keep up the good fight against Mitch McConnell and the constitutional right to smack your woman around and shutting down the government in the name of argle bargle. Because we think Alison Lundergan Grimes will make a very nice senator.