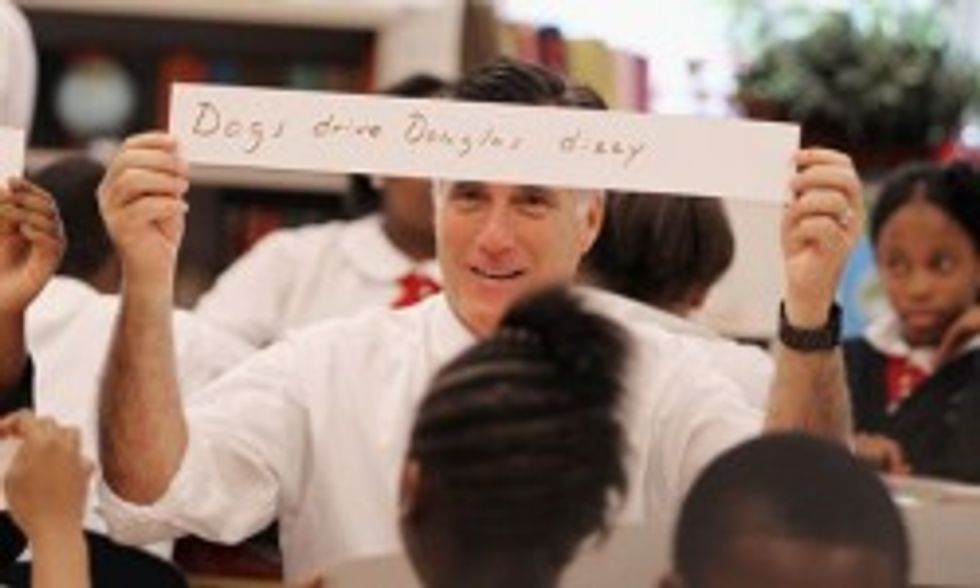 Everyone can relax now because I am back from my vacation and here to shed light on all the horrible things that are in store for, or currently happening to, the Best Country On Earth.™ And as it turns out, there are several, which at this point should come to a surprise to exactly no one. For example, did you know about Mitt Romney’s plan to destroy public education, which he revealed a couple weeks ago in a White Paper that no one paid much attention to? This is an actual White Paper, by the way, not an offhand comment like the one he made abouthow much he likes firing people who provide teaching to you. You will be shocked, just shocked, to learn that the “ideas” in this 35-page-long White Paper are about the same as the ones that John Sununu said on TeeVee, and can be succinctly summarized as follows.

To be fair, there’s stuff in there about how no one actually needs to go to school (Higher education will flourish when "innovation and skill attainment" matter more than "time in classroom" and "Eligible students remaining in public schools will also have the option to use federal funds to purchase supplemental tutoring or digital courses from state-approved private providers rather than receiving Title I services from their district.") Also, tax payers will give money to private corporations instead of public institutions ("charter school programs [must be able to] expand to meet demand, receive funding under the same formula that applies to all other publicly-supported schools, and access capital funds.") And no Romney campaign materials would be complete without a bunch of flagrant lies! ("after three months,” he says, “students [in the DC voucher program] could already read at levels 19 months ahead of their public-school peers,” which, as the Guardian points out, is not true.) But basically, it boils down to destroying unions and free public education, which means that if Romneybot has his way, we will all be living in Louisiana and it’s going to be AWESOME.