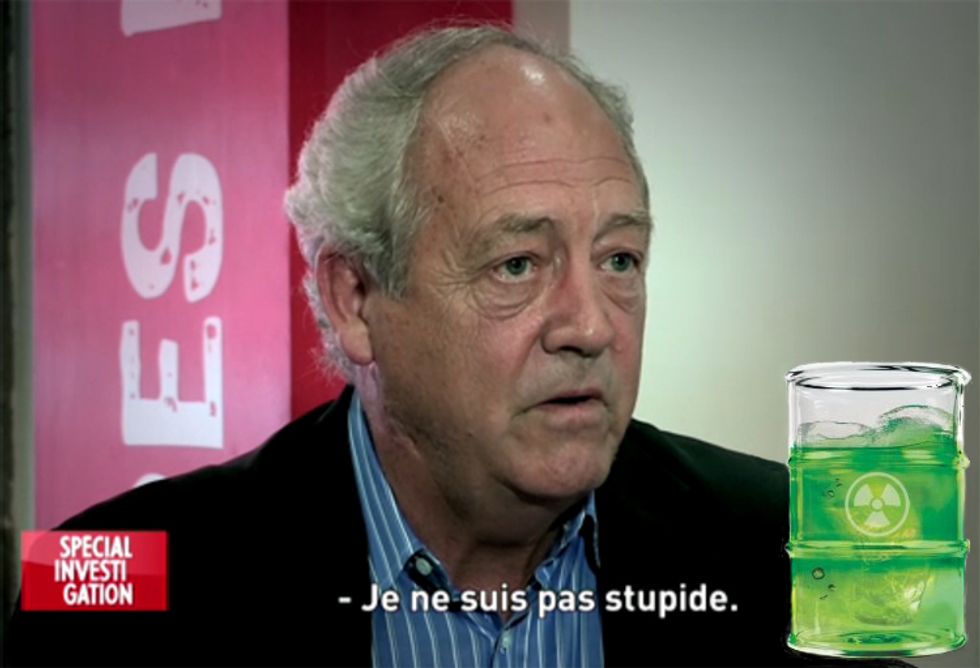 Updated: see end of post. So here's a thing of beauty: Chemical industry apologist Patrick Moore wants to assure the world there is absolutely no truth to the pernicious assertions that glyphosate, the active ingredient in Monsanto's Roundup herbicide, is harmful to humans. In an interview for a documentary on French television station Canal +, Moore denies that glyphosate has led to increased cancer rates in Argentina, because such a thing is simply UNPOSSIBLE. How safe is the stuff? Just watch! (Don't be askeered by the French subtitles; the interview is in English.)

(the original video appears to have been disappeared, here's a CBC report on the stupid thing. They keep their videos up!)

MOORE: You can drink a whole quart of it and it won't hurt you. INTERVIEWER: You want to drink some? We have some here.
MOORE: I'd be happy to, actually... Not really. But I know it wouldn't hurt me.
INTERVIEWER: If you say so, I have some.
MOORE: I'm not stupid.
INTERVIEWER: So, it's dangerous?

Mais non, it's not dangerous! Moore just isn't thirsty at the moment. Plus, although he doesn't say it, it tastes like ass (we assume; we are also not stupid and would never drink the stuff). No way was Moore going admit that potentially embarrassing detail on camera, though. And the interviewer didn't even offer a mixer.

The interview continues, with Moore insisting that people who have tried to commit suicide by drinking Roundup have failed, which is really all the proof you people should need. Clearly annoyed that the interviewer keeps daring Moore to take a nice big gulp of glyphosate, Moore abruptly ends the interview, peeved that he'd been put on camera under false pretenses:

INTERVIEWER: So, are you ready to drink one glass? MOORE: No, I'm not an idiot. Interview me about golden rice, that's what I'm talking about.

It's probably just as well the interviewer didn't ask about golden rice, however, considering that we're fairly certain it is made with pee. Moore announces "the interview is finished," the interviewer calls him a real mature babyman, and Moore calls the interviewer a doo-doo-head as he storms off the set.

You may also be amused to learn that, to enhance his credibility on environmental issues, Moore likes to tout his early membership in Greenpeace -- an affiliation the group says ended long ago, like about the time he started PR whoring for all the industries Greenpeace fights:

For more than 20 years, Mr. Moore has been a paid spokesman for a variety of polluting industries, including the timber, mining, chemical and the aquaculture industries. Most of these industries hired Mr. Moore only after becoming the focus of a Greenpeace campaign to improve their environmental performance. Mr. Moore has now worked for polluters for far longer than he ever worked for Greenpeace.

As for poor, misunderstood glyphosate, last week the International Agency for Research on Cancer (IARC), a research arm of the World Health Organization, released a report identifying the chemical as "probably carcinogenic to humans" in a study of several common household pesticides and herbicides. So maybe Moore made the smart decision not to emulate those Air Force officers in Vietnam who reputedly would show off the safety of Agent Orange by licking the release nozzles of planes outfitted to spray the stuff all over the jungle.

UPDATE/CORRECTION: While multiple blog posts on this video identified Patrick Moore as a "Monsanto Lobbyist," Monsanto has issued a statement denying any paid relationship with Moore. He's just a private citizen who has very affectionate feelings for the chemical industry giant, and wouldn't dream of sullying that love by taking money for it. Then again, maybe they just haven't asked him yet. Monsanto's statement reads, in part:

Wonkette regrets the error. In this case, Patrick Moore is a volunteer fluffer, not an industry hoor.