Montana Would Like To Not See Your Naked Bits, Please 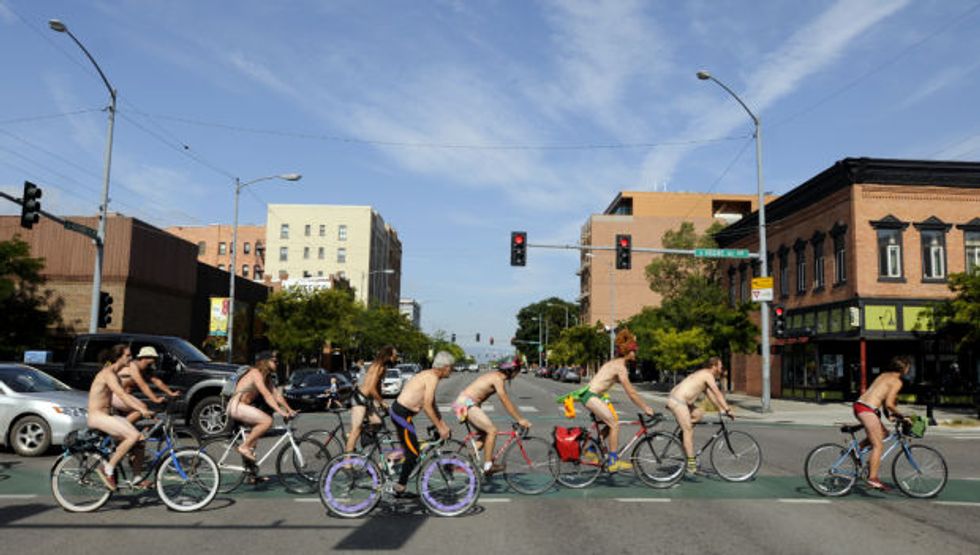 Where does it say you can't ride your bike naked through the streets of Missoula, Montana, on a warm summer day, huh? Nowhere, that's where!

Which is why there was absolutely nothing wrong with the "Bare As You Dare" bike ride last August, in which about 100 people pedaled in various states of undress -- or no dress! -- to make some kind of point about how bike riding is fun and being naked is fun too! Also something about how bicycles are better for the environment than cars, which is probably an urban myth, and some other thing about how all bodies are beautiful, which is DEFINITELY an urban myth. It's sort of a worldwide movement, and people have been enjoying getting their harmless point-making nudity on for years, in all kinds of places.

But oh no, some people in Missoula did not care for seeing that sort of thing, not one little bit, and they are demanding that Big Government protect their fragile eyes from having to see boobies on bikes ever again:

The measure, introduced by Rep. David "Doc" Moore of Missoula, seeks to clarify state law by spelling out an infraction as "indecent exposure of private parts or simulated private parts in a public place" in a way that a "reasonable person would be offended or alarmed."

The bill introduced by State Rep. Moore (or should we say Less, hmmm?) would add far more detailed language to the state's existing Don't Be All Naked In Public law. You could be convicted of indecent exposure for "knowingly or purposely" revealing your "genitals, pubic hair, or anus" or exposing "the areola or nipple" of your breast "with anything less than a fully opaque covering while in a public place or visible from a public place without taking reasonable precautions to prevent exposure." Not only that, but you can't even pretend to be naked, because the new language also prohibits:

... any device, costume, or covering that gives the appearance of or simulates the genitals, pubic hair, anus region, or pubic hair region or exposes any device worn as a cover over the nipple or areola of the female breast that simulates and gives the realistic appearance of a nipple or areola while in a public place or visible from a public place without taking reasonable precautions to prevent exposure, and disregards whether a reasonable person would be offended or alarmed by the act.

Good luck with your new bill, "Doc" Moore. We sure hope you will be able to restore decency and clothing for the good freedom-loving folks of Missoula, because what is even the point of freedom if you have to see it all exposed like that?