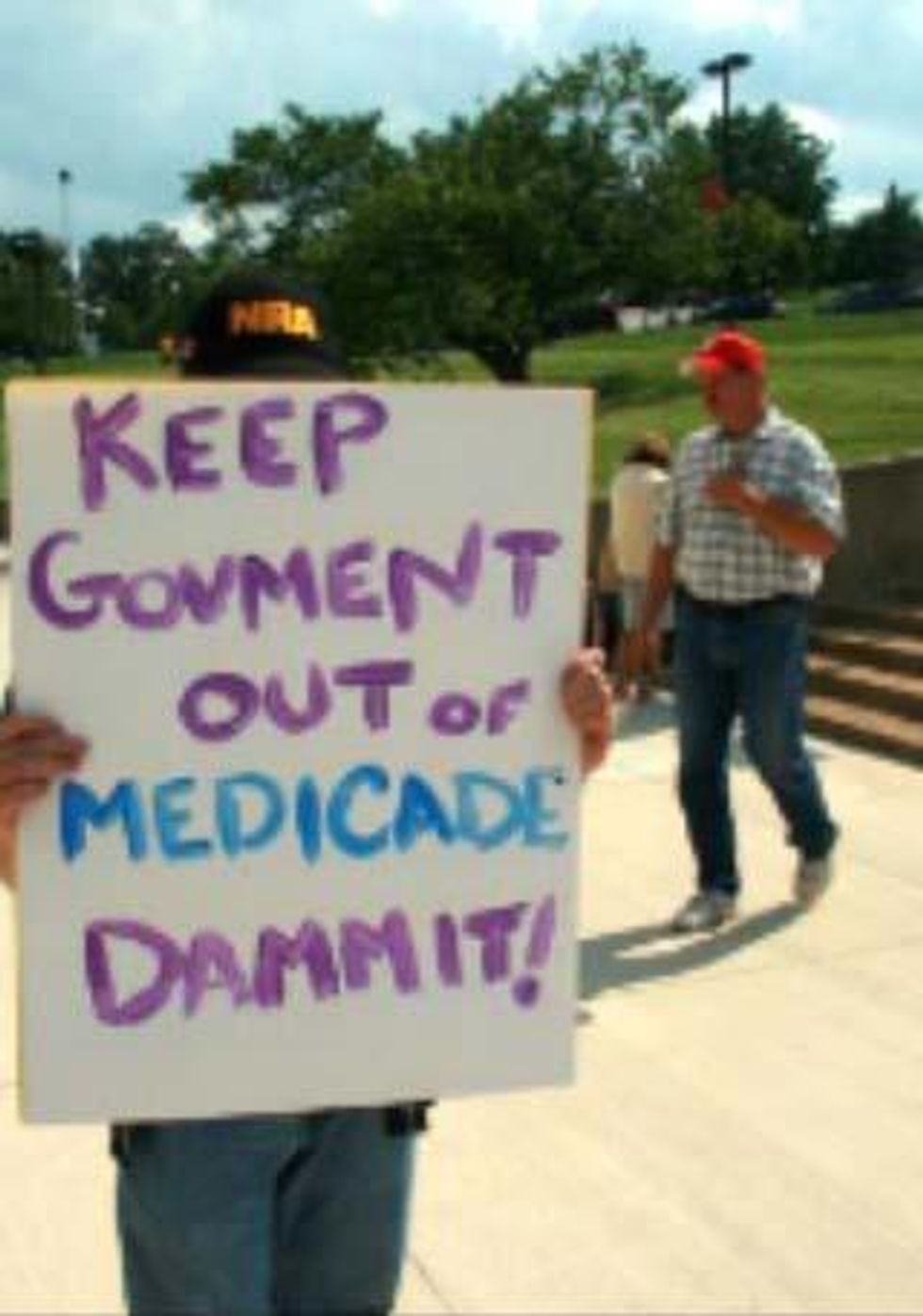 While more than half of our American U.S. states are proficient enough at math to conclude that free dollars from the federal government to expand healthcare access to low-income citizens is a really good deal, some Republicans who are terrible at math and terrible at legislating and terrible in general still can't quite add it up. Five years after passage of the Affordable Care Act, some red states are still debating, or outright refusing, free money because they just really REALLY hate President Obama:

Twenty-four states and the District of Columbia said yes to Medicaid expansion when the law went into effect. Since then, just six more have signed on. States that say yes get billions of additional federal dollars, but many Republican lawmakers are loathe to say yes to the Obama administration.

The expansion enables adults with incomes up to 138% of the poverty level to receive Medicaid. The federal government picks up the whole tab for their care through 2016, then tapers its support down to 90% of the costs.

It would be HI-larious, if the consequences weren't so severe and even fatal, that states who've happily sucked off the government teat for years are all of a sudden uninterested in federal dollars for poor people to be able to go to the doctor. Because, as many maps, including this one, have demonstrated over the years, those freedom-loving red states also happen to comprise America's welfare states, taking more federal dollars than they contribute. Deadbeat moochers, if you will -- while blue states like California pay their bills for them, without dictating what kinds of food they can buy or demanding they piss in cups to prove they're not junkies.

But for some reason, these very states just can't bring themselves to accept government assistance for a healthcare program signed into law by evil weenie dictator Barack Obama. Gov. Rick Scott, for example, really wants the federal government to continue to subsidize Florida's healthcare program for low-income patients, as it has for years. But he doesn't want to do it through Obamacare; he wants non-Obamacare federal dollars, for a lesser program that covers fewer patients.

Other states, like Utah and Wyoming, have flatly refused to expand Medicaid through Obamacare. They have yet to refuse the other federal dollars they happily accept every year.

Montana, another welfare state, has been fighting like hell, with an assist from the Koch brothers' Americans for Prosperity, to keep out those icky ACA bucks, with Republicans and Democrats finally compromising on a bill that still requires federal approval, which Montana Republicans insist is not Medicaid expansion. But FINE, Montana will reluctantly accept some help to insure its low income citizens.

Alaska, one of the biggest welfare queens in America, doesn't know what the hell to do with itself. On the one hand, that oh-so-independent rugged maverick wild frontier state already has its grubby little hands out for Washington DC's charity, instead of pulling itself up by its own bootstraps. On the other hand, Alaska is SO independent and also too hates the president, like, extra hard. What to do, what to do?

In Alaska, Gov. Bill Walker, a former Republican who is now independent, has made Medicaid expansion a top priority.

But Republicans leading Alaska's state House and Senate blocked expansion during the legislative session that just wrapped up.

Funny thing about Alaska: Republican legislators think Medicaid expansion is a terrible idea, but regular Alaska-Americans don't; 65 percent of them would like to have that, please and thank you. And Alaska is in even worse trouble than usual:

The state is currently facing a massive budget deficit because of the plunge in oil prices. And Walker says even in better financial times, Alaska doesn't usually decline more than a billion federal dollars.

"If that was a road project or if that was some infrastructure project, we would be all over that," he says. "This is health care."

Yeah, Alaskan Republicans wouldn't hesitate to ask for government assistance for other stuff. Like, say, a bridge to nowhere? But ooh gross, Obama, so while even the Republican (sorry, "independent") governor realizes turning down free money that would cover an additional 40,000 Alaskans is really stupid, the rest of his party just can't go there. But please do keep sending those other federal checks, so long as they don't say OBAMA on them.