Moody's: Donald Trump Would Be 'Bad' For The Economy, Is That Even Possible? 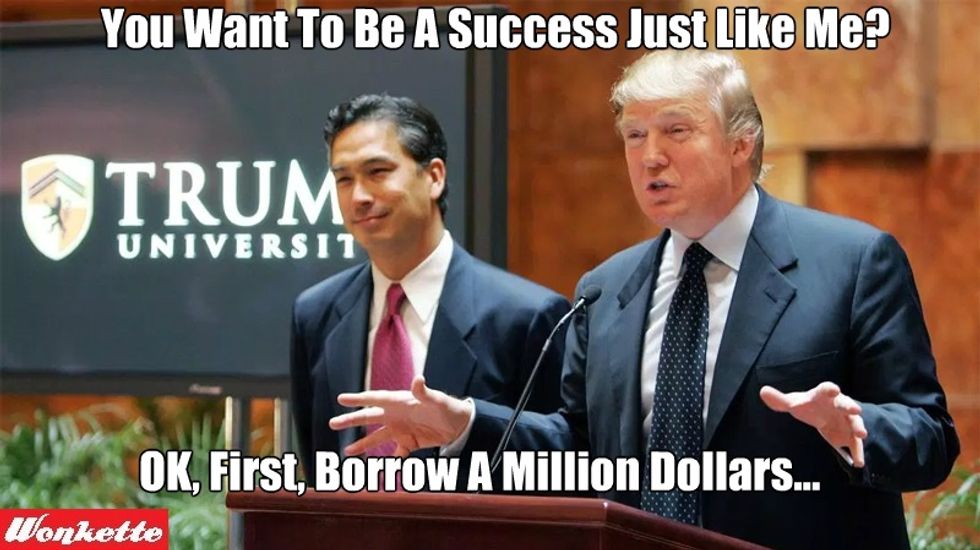 Around about 2008, this guy Ken Layne bought this vulgar sexxx web-site "Wonkette" from some dicks at Gawker Media. I don't know if you remember 2008, but that was right about when Elizabeth Warren broke the economy by forcing bankers to give themselves billion-dollar bonuses for allowing Barack Obama the privilege of saving they ass. At least, that is how they remember it!

About four years later, that guy sold that web-site (this one!) just in time for "the economy" to stop sucking quite so bad, and employment to stop sucking quite so bad, and gas prices to sink to levels that made owning an RV sound like a fun way to travel the country getting readers to like you by buying them beers instead of a hellish money pit (but still kind of a hellish money pit). Basically, it had taken a Democratic president about four years to start digging the country out of the grim Dickens story the previous Republican president had brought to life.

This is what we in the sciences call "anecdotal evidence," but it is very good anecdotal evidence, because it is us: in the four years since we bought this mommyblog, our income has gone from $14,000 the first year (not kidding) to even more than that! And we've been able to add three-and-a-half full-time solid-middle-class jobs besides the one we bought for ourselves! (The "half" is for our husband, who doesn't really get a "salary" and kinda gets boned.) (That's what she said.) And only one-and-a-half of those three-and-a-half jobs is paid direct from your wallet!

[wonkbar]<a href="http://wonkette.com/603171/whiny-wall-street-babies-preemptively-so-mad-at-vice-president-elizabeth-warren"></a>[/wonkbar]WHAT I AM SAYING IS: we are terrified a Republican president will get elected and fuck the economy to smithereens again, while angrily pulling out fistfuls of its hair. And guess who agrees that will totally happen! "Moody's"! The investors' analysts who helped the 2008 recession along by selling credit ratings, firing whistleblowers, and letting Wall Street "analysis" itself! Now they are here to NOT THIS TIME, MISTER! (Donald J. Trump.)

We'll let Politico do the copy-and-pasting:

“Driven largely by these factors [tax cuts mostly], the economy will be significantly weaker if Mr. Trump’s economic proposals are adopted. Under the scenario in which all his stated policies become law in the manner proposed, the economy suffers a lengthy recession and is smaller at the end of his four-year term than when he took office,” the authors wrote. “By the end of his presidency, there are close to 3.5 million fewer jobs and the unemployment rate rises to as high as 7%, compared with below 5% today. During Mr. Trump’s presidency, the average American household’s after-inflation income will stagnate, and stock prices and real house values will decline.”

The report also determined that Trump’s plans would hit the middle class the hardest while high-income earners would benefit the most from his tax breaks.

“Everyone receives a tax cut under his proposals, but the bulk of the cuts would go to those at the very top of the income distribution, and the job losses resulting from his other policies would likely hit lower- and middle-income households the hardest,” the report said. “The decline in wealth caused by weaker stock prices and housing values would be felt by all households.”

[wonkbar]<a href="http://wonkette.com/603104/how-can-donald-trump-cut-taxes-when-he-already-doesnt-pay-any"></a>[/wonkbar]You know how that does not sound? "Good." Also, Trump's tax cuts would cost an additional $9.5 trillion. Do you get free college or health care for that? NO YOU DO NOT. But Donald Trump doesn't like to pay taxes, so get used to it, you fucking taker.

[wonkbar]<a href="http://wonkette.com/601499/looks-like-donald-trump-is-bad-at-economy-huh"></a>[/wonkbar]Anyway, America, remember that times are good when Democrats are in office, and we have no idea how Republicans suckered the public into thinking they were the party of fiscal responsibility (LOL) or "good at business," especially when that Republican is Donald Trump, who wants to bargain your nana out of the T-bill she bought you.