MORE EVIDENCE That Bill Ayers (The Terrorist) Wrote Obama's Book, The One About His African Dad 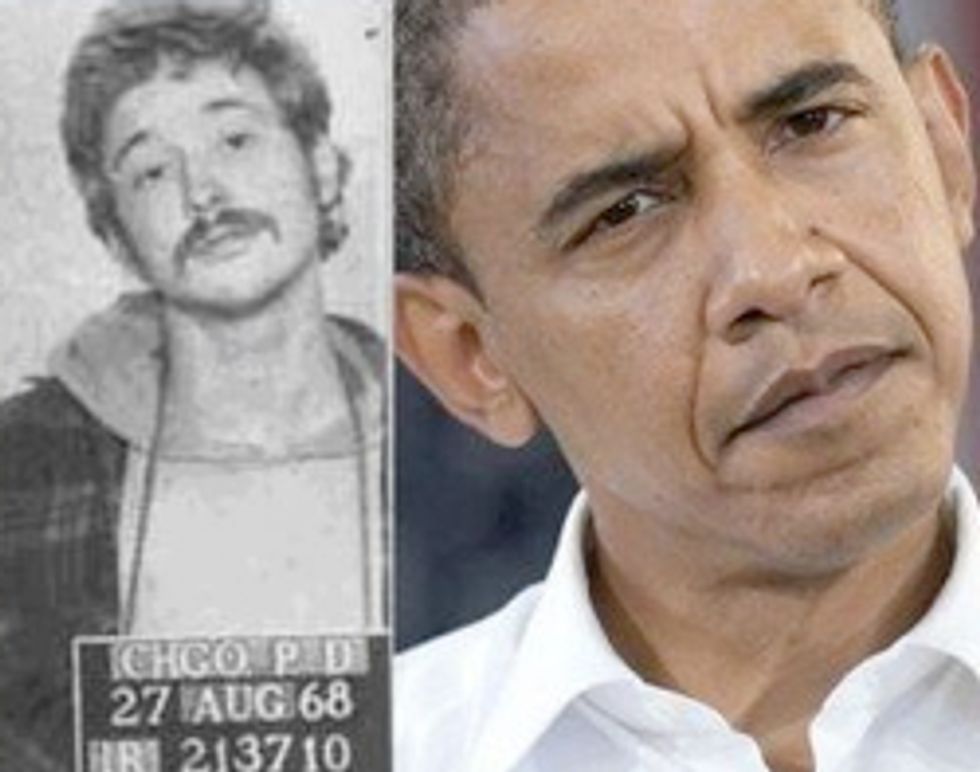 Last fall an Internet hobo named Jack Cashillbroke a certain "biggest political scandal ever" proving that Bill Ayers, the hippie terrorist, colluded with then-Sen. Barack Obama, in 1995, to ghostwrite the latter's profane memoir, Dreams From My Father. Cashill noticed that several sentences in Dreams incorporate similar (if not exact) individual proper nouns and conjunctions as those in Ayers' Fugitive Days and other books. National Review hero Andy McCarthy picked up Cashill's story, but then it died, because of liberal political biases in the national media. But it hath risen a-gain! Cashill wrote a long post yesterday titled, "Breakthrough on the Authorship of Obama's 'Dreams,'" and it proves once and for all that Obama didn't write a fucking word in the whole book; it was all the terrorist Bill Ayers. And Jon Favreau wrote The Audacity Of Hope!

Cashill cleared his schedule for the whole last year to play e-mail detective with "serious people" from most other countries, whom he has labeled with clown names, because of Joe the Plumber.

Since then, I have received helpful contributions from serious people in at least five countries and any number of states and have integrated many of their observations into my ongoing narrative, summarized here. If you are unfamiliar with this research, please read this before going forward.

About a week ago, however, I heard from a new contributor. I will refer to him as "Mr. West." Like most contributors, he prefers to remain anonymous. The media punishment that Joe the Plumber received has much to do with this nearly universal reticence.

A week before that, I heard from another excellent contributor, Mr. Midwest. Their collective contribution should dispel the doubts of all but the willfully blind that Ayers played a substantial role, likely the primary role, in the writing of Dreams.

What was unnecessary in this investigation was Science.

As a reminder, there is no reliable computer science for determining authorship. In assessing the value of the existing science, think polygraph, not DNA. Polygraph-level scholarship may suffice for harmless speculation about the authorship of Midsummer's Night Dream, but not for Dreams From My Father. Too much is at stake for the latter.

First, it was necessary to set up Parameters. If each instance of Ayers' ghostwriting was a boobie, what size bra would it need?

What Mr. Midwest noticed recently is that both Ayers in Parent and Obama in Dreams make reference to the poet Carl Sandburg. In itself, this is not a grand revelation. Let us call it a C-level match. Obama and Ayers seem to have shared the same library in any case. Both talk of reading the books of Malcolm X, James Baldwin, Langston Hughes, W.E.B. Dubois and Frantz Fanon among others. In fact, each misspells "Frantz" as "Franz."

Ayers and Obama, however, go beyond citing Sandburg. Each quotes the opening line of his poem "Chicago." From Dreams:

He poured himself more hot water. "What do you know about Chicago anyway?"

I thought a moment. "Hog butcher to the world," I said finally.

"At the turn of the century, Chicago had a population of a million people and was a young and muscular city - hub of commerce and industry, the first skyscraper city, home of the famous world exposition, "hog butcher to the world" - bursting with energy."

This I would call a B-level match. What raises it up a notch to an A-level match is the fact that both misquote "Chicago," and they do so in exactly the same way. The poem actually opens, "Hog butcher for the world."

SOMEONE DIDN'T COVER HIS TRACKS, DID HE?

Serious Person "Mr. West" had much, much more, but if only he could trick the damnable Obama-controlled e-mail machine into transmitting his codes!

Last week, the first email I received from Mr. West had in the message box "759 striking similarities between Dreams and Ayers' works." This claim seemed so outsized I did not take it seriously. When I was unable to open the documents, I emailed Mr. West back, asked him to reformat, and then forgot about the email. He resent his documents a few days later.

"The 759" are all basically direct instances of plagiarism and ghostwriting, a sort of literary "bombing the Pentagon storage room" exercise. What are all of these words that Bill Ayers uses in his two books, and how could Cashill not know them?

Returning to the exotic, in his Indonesian backyard Obama discovered two "birds of paradise" running wild as well as chickens, ducks, and a "yellow dog with a baleful howl."

In Fugitive Days, there is even more "howling" than there is in Dreams. Ayers places his "birds of paradise" in Guatemala. He places his ducks and dogs together in a Vietnamese village being swept by merciless Americans. In Parent, he talks specifically about a "yellow dog." And he uses the word "baleful" to describe an "eye" in Fugitive Days. For the record, "baleful" means "threatening harm." I had to look it up.

Ayers is fixated with faces, especially eyes. He writes of "sparkling" eyes, "shining" eyes, "laughing" eyes, "twinkling" eyes, eyes "like ice," and people who are "wide-eyed" and "dark-eyed."

Now Cashill *never* claimed that Bill Ayers wrote Obama's second book, he never SAID THAT, he is not crazy. The Audacity Of Hope was written by, let's see... ah, that little queer kid who writes all the stuff these days.

A likely suspect for these imitative passages, perhaps the whole of Audacity, is Obama's young speechwriter, Jon Favreau. Favreau joined the Obama team in 2005, time enough to play that role. The London Guardian reports that Favreau carries Dreams wherever he goes and can "conjure up his master's voice as if an accomplished impersonator." If so, in Audacity he played the classic role of the ghostwriter -- one who absorbs his client's thoughts and relates them in a refined version of his client's voice.

WHY ARE YOU NOT OUTRAGED ENOUGH?

Breakthrough on the Authorship of Obama's 'Dreams' [American Thinker via Salon]