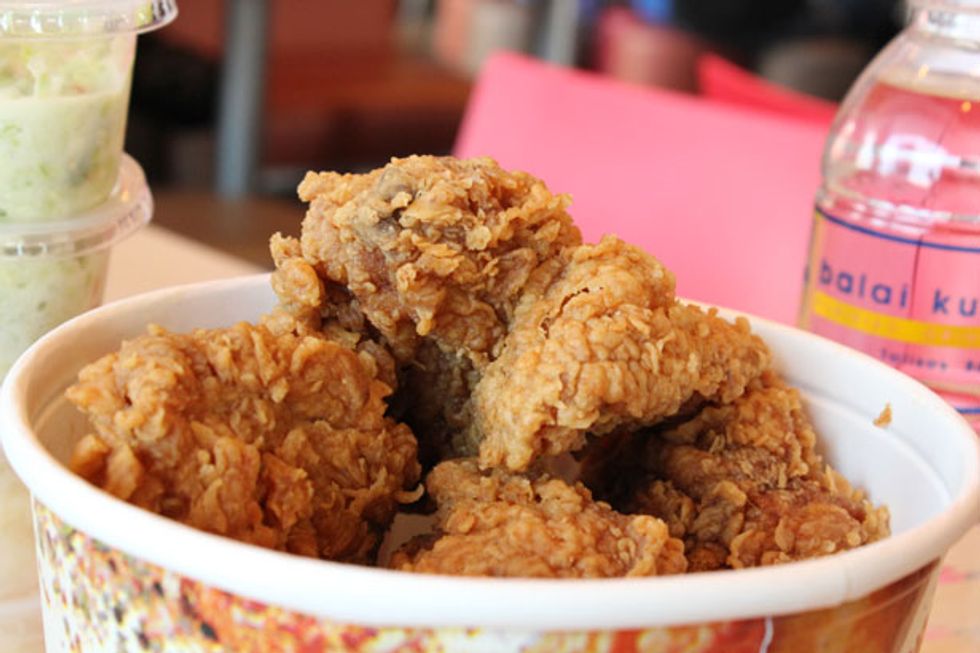 Welcome back to Off The Menu, where we bring you the best and strangest food stories from my email inbox. Today, we've got one of the classics: stories of fantastically dumb restaurant customers. As always, these are real emails from real readers.

If you enjoy this series and would like to show your appreciation to this here fine website for hosting it, feel free to donate here or buy an “ad-fewer” subscription here. Yay munneyz!

I worked at a KFC for 5 years. Every single day I worked there I did drive-thru, including my first day. It wasn’t a daily occurrence but it was a frequent one.

Q: “Would you like your chicken original recipe, extra crispy, or rotisserie?”

Me: I repeat the question.

Me: “I’m sorry, but what type breading do you want on your chicken? We have...”

I’m not sure it ever went past asking the third time.

A man asked me tonight if the oil we apply to one of our edible foodstuffs was oily. “Yes,” I said. “It’s an oil."

I was at Subway during my lunch break, and I witnessed the only person in the world who doesn't understand how Subway works. This customer ordered some sandwich, and then told the poor employee that he wanted it just as it was pictured. Confused as to what he meant, the guy ordering the sandwich pointed to the menu board and said "just make it like that.” The Subway employee said "what if you just tell me what you want from these ingredients?" as he pointed to the fully stocked ingredients bar.

The customer was a little annoyed at having to order his sandwich like that, and then proceeded to sneer and say to me "can you believe this?"

No, I cannot believe it.

I had a customer who had been told by their doctor to avoid dairy, but were ordering some deep fried cheese sticks. When informed that this might not be a good idea, given the medical advice they had been given, their quote was something along the lines of "I'm not having dairy, I'm having cheese." Whereupon it was explained that cheese is, in fact, generally a dairy product, and that this cheese certainly was. Apparently, this was news to them.

I work in a Marco Pierre White New York Italian restaurant in Leicester (UK), and we serve pretty simple foods. I sat a couple down in a fellow server's section, she took their order, and I was the one to bring the two dishes out when it was ready. One was spaghetti bolognese and another was sea bass filet with roasted potatoes and veg.

I placed the sea bass in front of the man who nodded when I said the dish's name to tell me it was his, and his mouth dropped open as he exclaimed: “There is a FISH on my plate!” As I was not his waitress, I looked at him and asked if that's what he'd ordered, and his girlfriend nodded. He then said, “Yes, but there's a fish on my plate!” All I could think to say was, “Yes, sir, sea bass is a fish,” as non-pedantically as possible. He sat back in his chair and exhaled a long breath, stating he didn't know if he could be so adventurous.

I’ve tended bar in a Spanish joint for the last 4 years. It’s in the Farmer’s Market in Los Angeles, which is an old, open-air, touristy place. It kind of looks like a super expensive food-court. The restaurant has a full service patio, bar service and you can also order food and take it away to eat pretty much anywhere in the Farmer’s Market. It’s all very confusing for tourists.

The fact that we only serve Spanish wines and beer is too much for a lot of our customers to bear. They just. Don’t. Understand. I don’t have a problem with people who aren’t familiar with them and I’m happy to describe our selections to help out, but some people don’t want to be helped out, or they take it as an insult.

On one occasion I had a lady ask for a Chardonnay. I explain to her that we don’t have Chardonnay, we only have Spanish origin wines and I direct her to our selection of white wines. We have an Albariño and a Verdejo and I describe both varieties to her.

She thinks about it for a minute and then asks, “The Verdejo...what kind of wine is that?”

“ ... It’s a Verdejo. It’s dry and just a little fruity, kind of similar to a Sauvignon Blanc.”

“Okay but what KIND OF WINE is it?”

“THAT’S what I wanted to know. I’ll take the Verdejo.”

After I pour her wine, I go take the order from a man who just sat down two stools down from her.

I studied abroad in London during college, and the last few days of the program my parents and sister came to visit. My father travels to London frequently, so we went to one of his favorite spots -- Gordon's Wine Bar -- for drinks one night.

First of all, this wine bar is literally in a cavern, so it's very dark and fairly loud. Even so, when out waitress dropped our cheese plate off at our table, explaining what each cheese was ("This is X, this is Y, this is Z and this is butter"), we all seemed to hear her perfectly.

Oddly, my mother opens a little aluminum foil square of butter first, instead of going for the cheeses. She smothers it on a piece of bread and immediately raves how rich and creamy it is. We ignore her and continue the conversation, until she opens her second pack and makes anther comment about how delicious the butter is.

"Mom, it's butter?" we say, but she's too busy having a foodgasm.

Third piece of butter: "Hugh, what is this? Save the wrapper and see if we can find some at Borough to take home."

When the waitress returns, my mom asks her for more of the aluminum foil cheese. The waitress looks confused, but returns with more butter.

"WILL SOMEONE ELSE PLEASE TRY THIS?" she finally wails, and we yell back, "IT'S BUTTER!"

After a few stunned seconds, she proceeds to lose her shit and screech, "WHY DIDN'T YOU TELL ME IT WAS BUTTER?"

To this day, whenever I'm with her, I make sure to carefully point out the butter.

I once had a lady order the cheesecake without ice cream because she was allergic to dairy.

Had a woman come in the other night. Sat right down and said “martini!” to my other bartender. With a very forced smile, my bartender asked her if she wanted Vodka or Gin. The woman looked her straight in the eye, leaned over the bar, and repeated, “MARTINI!” Calmly, my bartender asked her if she wanted a vodka or gin martini, or maybe a fruity one (many people confuse cocktails/drinks with martinis because they come in a “martini” glass. I blame Sex and the City). This time, the woman screams “MA-RR-TIIIINNIII!!!!!”

She then leaves the bar and sits at a table about 78,333 feet away from us. So my bartender makes her a vodka MARTINI (good choice, as most people who don’t understand the question “Gin or Vodka?” want vodka) and makes the seven-mile trek over to the table. I’m not shocked at all when my bartender returns with the drink in her hand. She looks at me (with steam pouring out of her ears) and says -- “She wanted a fruity one.”

At breakfast one morning, I overheard the woman at the next table telling her friend how she was now vegan. She talked about it for the entire five minutes she was waiting for the waitress to take her order. When it was time to give her order, she told the waitress she wanted bacon, but really, really well done. Basically burned.

Her friend, of course, asks her about the bacon, since she just spent five minutes talking about being vegan now. Her response? "If you cook it for a long time and burn it, it cooks all the meat out.”