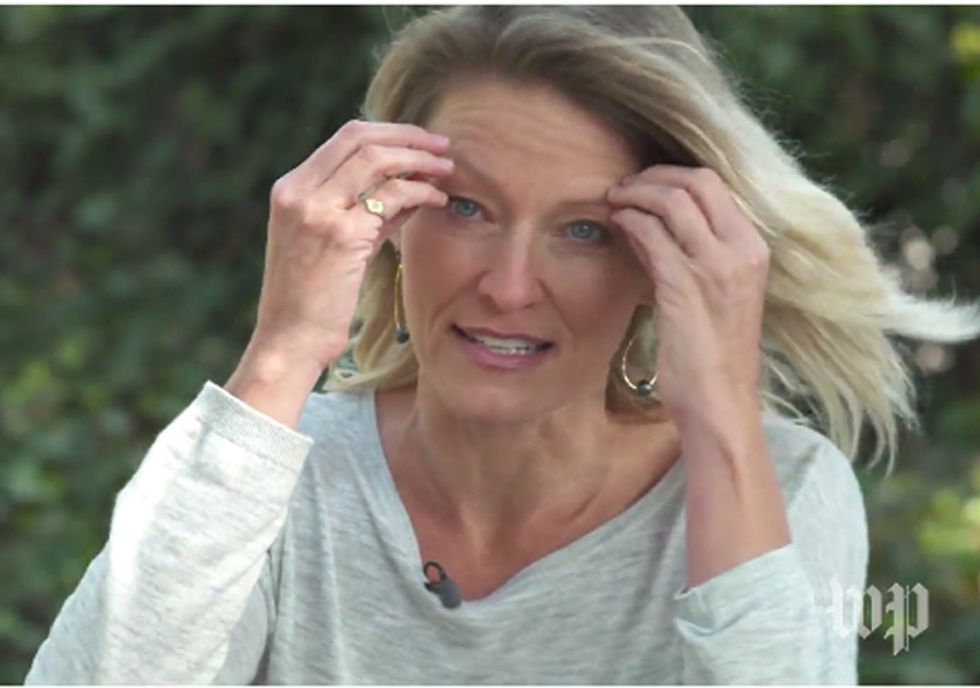 Another hour, another woman alleging that Donald Trump sexually assaulted her. A new accusation came out Friday from Kristen Anderson, a photographer in California who says Trump slipped his hand up her skirt at a nightclub in New York in the early 1990s. Yes, this is a different woman from the "Apprentice" contestant who also came forward with her story Friday. Yr Wonkette will cover these women's stories as they come out; as the numbers increase, we may have to install a digital counter to keep track.

Anderson told Washington Post reporter Karen Tumulty that Trump was seated next to her on a couch, but she didn't notice him at first:

until, she recalls, his fingers slid under her miniskirt, moved up her inner thigh, and touched her vagina through her underwear.

Anderson shoved the hand away, fled the couch and turned to take her first good look at the man who had touched her, she said.

She recognized him as Donald Trump: “He was so distinctive looking — with the hair and the eyebrows. I mean, nobody else has those eyebrows.”

At the time of the incident, which Anderson said took place in the early 1990s, she was in her early twenties, trying to make it as a model. She was paying the bills by working as a makeup artist and restaurant hostess.

Anderson said the entire event lasted no more than 30 seconds, and that when she went to tell her friends about it, they were “very grossed out and weirded out” and all agreed, "Okay, Donald is gross. We all know he’s gross. Let’s just move on."

The Trump campaign issued what is now becoming its ritual denial:

“Mr. Trump strongly denies this phony allegation by someone looking to get some free publicity. It is totally ridiculous,” Trump spokeswoman Hope Hicks said in an emailed statement.

Tumulty notes that Anderson did not approach the Washington Post with her story, but rather, that a "reporter contacted her after hearing her story from a person who knew of it, and she spent several days trying to decide whether to go public." Anderson says she doesn't support either Donald Trump or Hillary Clinton for president.

“It wasn’t a sexual come-on. I don’t know why he did it. It was like just to prove that he could do it, and nothing would happen,” Anderson said. “There was zero conversation. We didn’t even really look at each other. It was very random, very nonchalant on his part.”

She added that while she was trying to decide whether to go on the record, the New York Times published its story of two women also groped by Trump, as well as People magazine's first-person account by a reporter who says Trump attacked her at Mar-a-Lago, and those stories made her mind up:

“It’s a sexual assault issue, and it’s something that I’ve kept quiet on my own,” Anderson said. “And I’ve always kept quiet. And why should I keep quiet? Actually, all of the women should speak up, and if you’re touched inappropriately, tell somebody and speak up about it. Actually go to the authorities and press some charges. It’s not okay.”

Anderson doesn't recall the names of those who were with her at the club, but that they were probably coworkers at the restaurant where she worked. Get ready for the Usual Suspects to say that's proof it never happened. When they do, ask them for the names of everyone they worked with in a job twenty years ago. She also acknowledges she hasn't lived a perfect life and is ready for Trump supporters to be all over her for getting divorced twice, and for a breakup in which she and a boyfriend both sought restraining orders against each other. But she says she decided to speak up because Trump's behavior was so creepy:

A stranger “sort of groping you on the side, on the sly, like you’re some kind of stuffed animal on the couch. That’s really not okay, and it opens the door for much worse behavior on [his] part and for the girl, allowing worse things to happen to them because they feel that it’s inconsequential.”

“It’s really not nothing, and it sends an awful message to women that they’re nothing,” she added.

[wonkbar]<a href="http://wonkette.com/607513/somebody-did-all-the-groping-and-it-was-donald-trump-allegedly"></a>[/wonkbar]Trump surrogates are expected to reply to this new allegation, along with claims by Friday afternoon's other accuser, Summer Zervos, by chanting "JuanitaBroderickGenniferflowersEmails ClintonFoundationWikileaksSidneyBlumenthal BenghaziBuildTheWall" until their faces turn blue and they collapse. All except for Katrina Pierson, who will attempt to prove that couches in the early 1990s could not be sat upon by both men and women at the same time.