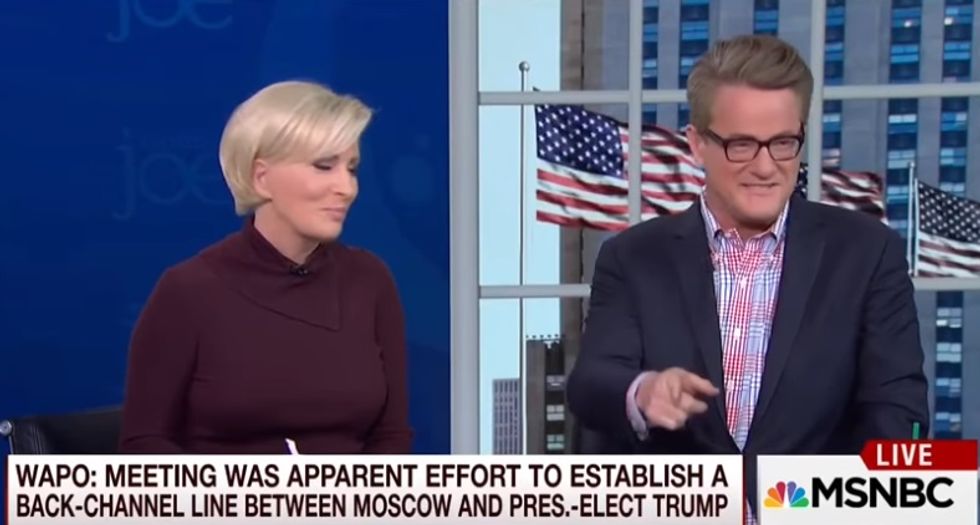 Fresh-faced blond twink Erik Prince, AKA Education Secretary Betsy DeVos's little brother, AKA the creepy Christian crusader who started the mercenary firm formerly known as Blackwater, is a biiiiiig Trump supporter. And he's in the news right now, because as the Washington Post reports, just before the inauguration in January, Prince went to a secret meeting in the Seychelles, for the purpose of creating some sort of new back channel between Trump and Vladimir Putin, because you can apparently never have too many of those!

The United Arab Emirates arranged a secret meeting in January between Blackwater founder Erik Prince and a Russian close to President Vladi­mir Putin as part of an apparent effort to establish a back-channel line of communication between Moscow and President-elect Donald Trump, according to U.S., European and Arab officials.

The meeting took place around Jan. 11 — nine days before Trump’s inauguration — in the Seychelles islands in the Indian Ocean, officials said. Though the full agenda remains unclear, the UAE agreed to broker the meeting in part to explore whether Russia could be persuaded to curtail its relationship with Iran, including in Syria, a Trump administration objective that would be likely to require major concessions to Moscow on U.S. sanctions.

Prince has been hanging around the Trump team for a while now. Before the election, when FBI Director James Comey released his SHOCKING REPORT about how he found THE SMOKING GUN on Hillary's emails, but it turned out to be just some recipes she pinned on Pinterest, Prince was throwing out conspiracy theories about his "well-placed" sources in the NYPD saying the FBI was about to literally arrest EVERYBODY, because they found 650,000 emails on Anthony Weiner's laptop about Bill and Hillary Clinton doing sex trips to sex islands to have sex with kids. Also, according to this wingnut wet fever dream conspiracy theory, this not only happened, but Hillary just Could. Not. Stop. Emailing. About. It. (Guess who else pushed that conspiracy theory? It was Russian front Wikileaks, because the disinformation coming from Moscow these days is INTENSE and COORDINATED.)

So yeah, Prince has been an "informal" Trump adviser for a while, but we guess he's a li'l too crazy for a formal role. Trump has standards, after all!

Of course, the Trump regime is issuing its usual denials and lies about the Seychelles meeting, with Press Secretary Sean Spicer saying Prince was NOT part of the transition team, and that, moreover, Donald Trump did not have sex with that woman. God, what a shitty job Spicey has.

Prince, for his part, said the following through his spokesperson:

“Erik had no role on the transition team. This is a complete fabrication. The meeting had nothing to do with President Trump. Why is the so-called under-resourced intelligence community messing around with surveillance of American citizens when they should be hunting terrorists?”

Oh goodness, Erik Prince is talking through his spokesperson about "hunting" people. It's like it's 2007 all over again!

Anyway, the Washington Post reports that, in the eyes of the United Arab Emirates, "Prince had the blessing of the new administration to act as its unofficial representative," and considering the apparently clandestine nature of the meeting -- the Seychelles is PERFECT for that kind of thing, according to its secretary for foreign affairs -- we're gonna assume these fuckers are lying their asses off.

Which brings us to Mika and Joe Scarborough-Brzezinski, hosts of the famous morning news program "We Just Did Morning Nookie, Allegedly, And So Can You!" J-Scar was NOT having Prince's drama queen denials about this meeting, or his lack of a role in the transition. NUH UH:

JOE: He's not telling the truth.

Do we all remember how Joe and Mika used to be "informal advisers" to Trump? They just might be in a position to know whether Erik Prince used to hang around Trump Tower wearing nothing but boxer shorts and like five assault weapons.

Joe then BET HIS LUCKY PEN that, even though Prince is lying his ass off about the meeting, this is probably the only connection between Prince and the Trump regime. Mika encouraged him to also bet his pet rock, and then IMMEDIATELY reminded him that Betsy DeVos is Prince's sister. Then Joe had to give her his pen:

This led Joe to break out into a giggle fit, asking "Betsy DeVos?! Who ARE these people? Who are these PEOPLE?" We just do not know, Joe, but we didn't used to be BFFs with them, YOU DID.

Finally, dingbat Mark Halperin asked why would Prince lie like this, when it's so obvious he's lying, and here is what Joe said:

JOE: Because he's stupid, that's why!

JOE: He's stupid. It's like Carter Page. I love the quote from the Russians about Carter Page. He's a blanking idiot! Tell everybody what you told me about these guys. It's from the '80s movie Spies Like Us. They're idiots!

[wonkbar]<a href="http://www.wonkette.com/615057/dumb-trump-idiot-carter-page-recruited-by-russian-spy-in-2013-like-some-idiot"></a>[/wonkbar]We agree that Carter Page is stupid, and Erik Prince is stupid, and that this is very much like Spies Like Us, and we are very sorry about how Mika is now the proud owner of Joe's lucky pen and pet rock, but we bet he's at her house often enough that he'll still get to play with them all the time, if you know what we're getting at, spoiler, we are talking about how they are maybe f-u-c-k-i-n-g.

This was a blog post about Erik Prince, originally.