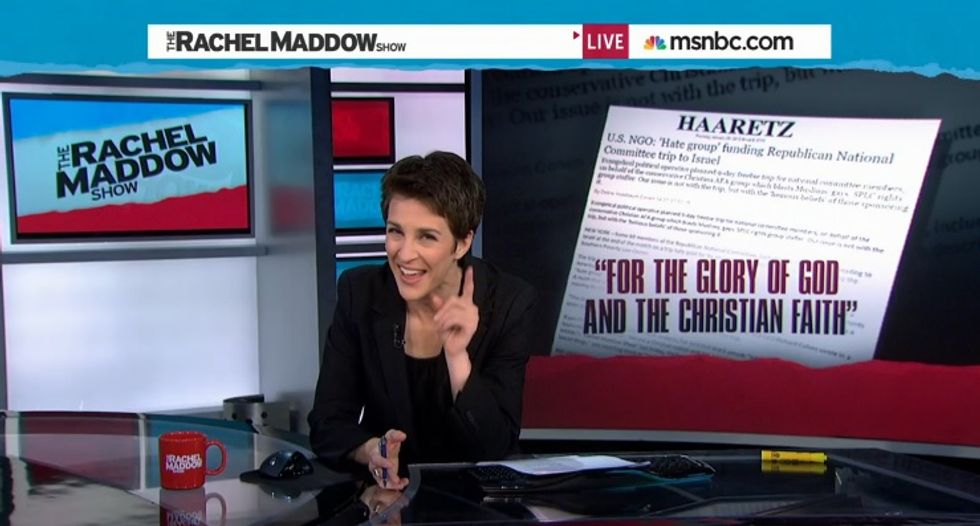 Rachel Maddow had a gen-you-wine old fashioned Big News Scoop in her Wednesday show. The larger story's a little convoluted, but the really terrific news is right up there in the headline, kids: wingnut preacher Bryan Fischer has been fired from his position as "director of issues analysis" for the American Family Association. Mediaite reports, however, that he will continue to host his radio show for the AFA, so it's really more of a demotion, we guess.

At the root of the mess is an unholy alliance between the AFA -- identified as a hate group by the Southern Poverty Law Center for its extreme homophobia -- and the Republican National Committee, which will be sending some 60 RNC members on a freebie trip to Israel, paid for by the "American Renewal Project," a subsidiary group of the AFA. The increasing media scrutiny of the Israel trip, usually accompanied by some of Fischer's more colorful pronouncements about Islam (which he's compared to the Ebola virus) or his bizarre insistence that the First Amendment only protects Christianity, was apparently the impetus for Fischer's semi-firing, although the AFA claims that he was let go for his claims that the Holocaust was perpetrated mostly by gay Nazis -- a claim he's been making for years.

Yeah, we know you're disappointed -- our money was on "rent-boy scandal," too.

The firing or demotion doesn't indicate any real change at the AFA; they're just distancing themselves from Fischer because his loonier pronouncements were becoming an inconvenient distraction from the AFA's core mission of promoting Christianist theocracy. After all, they're keeping the head of the American Renewal Project, David Lane, who's organizing the RNC's tour of Israel and happily told Haaretz reporter Debra Nussbaum Cohen, "America was founded by Christians for the glory of God and the Christian faith."

Amazing video. Watch and be astonished.

We're going to pick one small nit with Rachel, however. We think she's wrong to assert that Fischer's weird view of the First Amendment means he thinks that Jews don't have the right to practice Judaism in America. As far as we can tell, Fischer's one of those Christianists who believe that Judaism is just another form of Christianity that hasn't read far enough in the Bible yet, and so Jews will all become fully Christian once they graduate from the Old to the New Testament. After all, they practice Judeo-Christianity just like he does.