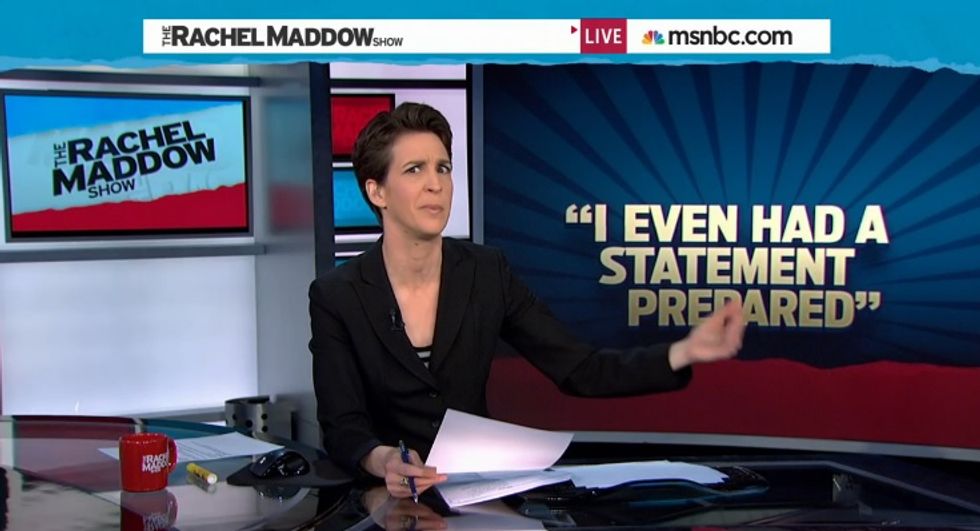 Rachel Maddow takes on the increasingly strange story of Oregon Gov. John Kitzhaber, who has reached a crisis point in the continuing scandal over the shady financial dealings of his fiancée, Cylvia Hayes, who is under investigation for alleged pay-to-play deals with companies doing business with the state. Virtually all the top elected officials in the state, Democrats like Kitzhaber, have called for him to resign. Tuesday saw a bizarre cross-country odyssey by Secretary of State Kate Brown, whom Kitzhaber called to come back from chairing a meeting in Washington DC, to meet with him. Very Urgent. And then he seemed surprised when she walked into his office. He told her he was definitely not resigning, and then said they should probably discuss the transition from his administration to her becoming governor if he does. Which he said he wouldn't.

Maddow wasn't entirely sure Kitzhaber would still be governor by the end of her report. As of this moment, he's still in office, barely.

This is Rachel at her "what the hell is wrong with people in power?" best. Nobody does political WTF nearly as well.

Also, here's a bit of fun fluff from Mississippi: the American Family Association, based in Tupelo, Mississippi, is trying to figure out just what to make of the fact that their home state of Mississippi set a record this week. Mississippians have bought the most advanced tickets for the Twilight fanfiction adaptation 50 Shades of Grey. Guess they just want to learn alternative uses for a Bible Belt.