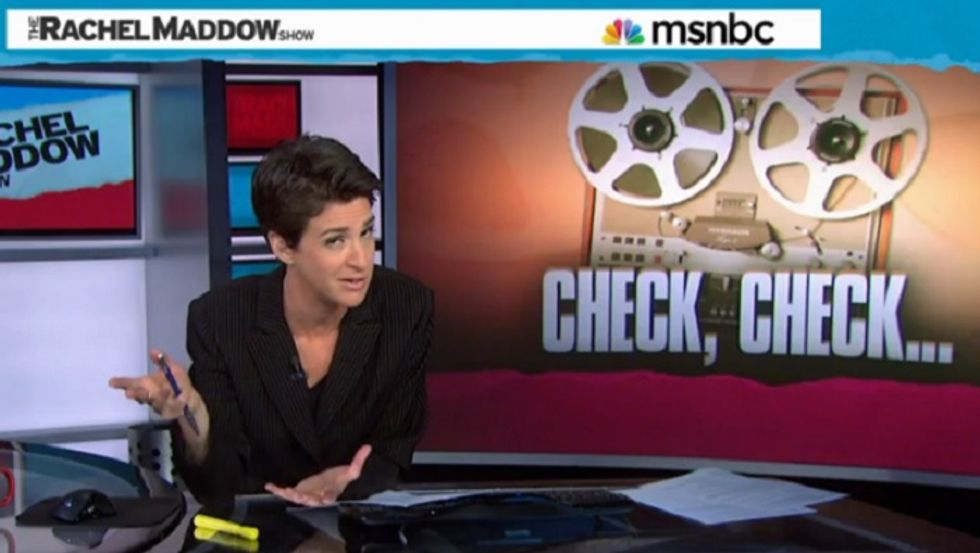 Monday night, Rachel Maddow brought us a segment on audio diaries kept by H.R. "Bob" Haldeman, which were recently released by the Nixon Presidential Library. At first, we were ready for another story about the Nixon administration's penchant for backbiting and sliminess, and there's definitely some of that -- Haldeman casually mentions that Robert Byrd's past as a KKK member actually weighed in his favor as a possible Supreme Court nominee -- but then things take another turn altogether as Haldeman describes Nixon meeting the family of Col. William Nolde, the last American combat casualty in Vietnam.

Nixon later wrote of the encounter, "I never hated the war in Vietnam more than I did at that moment." Its the sort of sentiment that presidents only seem to manage in retrospect, of course. And with that, Maddow pivots to the present day, noting that Congress still hasn't done its duty to actually authorize the ongoing military action in Iraq and Syria. No telling who the last American casualty of that particular noble cause will be, although we have a sinking feeling that he or she may still be on an elementary school playground right now.

And after that, you could probably use some "Best New Thing in the World Today" for a chaser. Check out this story of a marlin-fishing tournament held annually in Mexico. This year, after Cabo San Lucas, the city that usually hosts the tournament, was devastated by Hurricane Odile, the rich sport fishermen used the event to raise funds for rebuilding, including sponsoring a couple of counselors and orphans from the Casa Hogar orphanage to participate in the event. And like some weird cross between Capra and Hemingway, damned if the young men on the sea didn't catch the biggest fish of the tournament, bringing the grand prize of over $250,000 home to the orphanage. Nice time!