Most U.S. Unemployed Will Never Ever Find Work Again 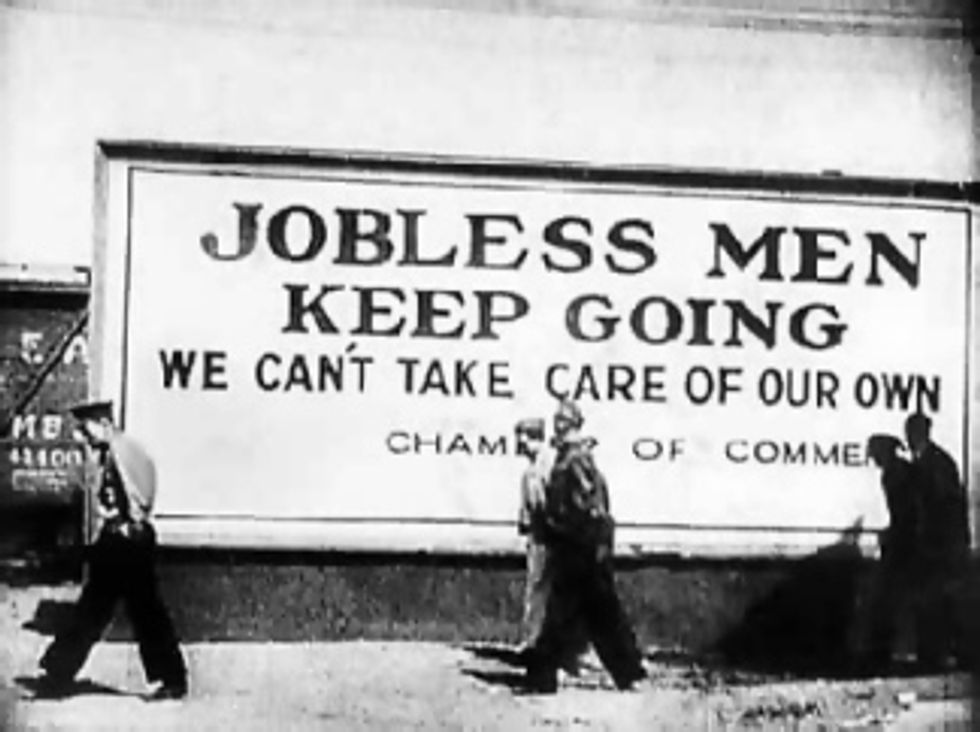 Here's some cheery news from the Roosevelt Institute: "Starting at the beginning of 2009, it is now more likely that someone who is unemployed will drop out of the labor force than find a job." Uhh ... that's probably a bad thing, right? Anything else to weep about, behind the dumpster? "Underemployment, or those employed working part-time for economic reasons, has increased greatly, often more than doubling. This is across all analyzed sectors and occupations." Hey, that kind of sounds like everyone we know!

This report, The Stagnating Labor Market (PDF), is the kind of thing Paul Krugman curls up with at night, after a long day of twittering "economist jokes" for the NYT. In fact, Krugman calls this report "excellent," which is the same thing bosses say as they entwine their bony fingers while another thousand workers are led off the premises by Blackwater assassins.

Here are some cheery numbers: The official unemployment number has doubled since December 2008, from 7.7 million to 14.9 million. Meanwhile, the number of people who are no longer "in the labor force" has risen by nearly 5 million, from 79.3 million in December 2008 to 84 million as of last month -- these people are no longer collecting jobless benefits and are no longer competing for the few available jobs. They've given up and dropped out.

And unless they've got a working spouse or money socked away to live off for the rest of their lives, they are in one way or another living off government assistance, unless they can't get any help, in which case they will soon be coming for those who seem to be better off. Charles Manson hoped to see the late 1960s "race riots" lead to an apocalyptic civil war, but it's Fox News that will be cheering on the real bloodshed, someday very soon.

One of the comforting (?) theories about this Recession, now officially the longest since the 1929-1933 recession, was that America's absurd reliance on the housing and finance shell-game sectors meant that overcapacity in those fields led to millions of unemployed people who could do little more than hang drywall or spray stucco or, more uselessly, process zero-down mortgages through some proprietary fill-in-the-blanks system created for morons who can't program their teevee remotes.

But this new study proves that the jobless epidemic has hit all American economic sectors, which means the Era of No Work doesn't just require somehow retraining housing tract laborers and Countrywide cubicle drones. Everybody is doomed -- and not just by sector, because if it was strictly a sector illness, people of various occupations could potentially move from one sector to another. The joblessness epidemic is occupational, too.

"Every one of the nine occupations we obtained data on had a doubling, at least, of underemployment," the report says. Whether construction or professional services, truck drivers or secretaries, executives or store clerks, unemployment by occupation has doubled during this Great Recession, across the board.

You might feel better if you're a doctor and your field's unemployment rate is only 3.68% today, but it was 1.73% in 2007 and that means it has risen by a ratio of 2.12. (At 15.03%, the jobless rate for construction workers is two-and-a-half times higher than it was in 2007, at 6%. So there are still a lot more idle roofers than surgeons or lawyers, but all can share the brotherhood of being in fields with double the joblessness of just three years ago.)

In light of these findings, it is clear that the weakness of the labor market is a generalized one and that the situation at the moment is more dire than is typically expressed in policy circles.

Gee, you think? What is the Roosevelt Institute, anyway?

The Institute is the nonprofit partner to the Franklin D. Roosevelt Presidential Library and Museum in Hyde Park, New York, and supports the Library's exhibits, educational programs, and special initiatives. The Institute is also home to the Roosevelt Institute Campus Network, connecting 80+ college campuses and more than 8,500 students and alumni to a vibrant series of programs that engage them in discussing progressive values, empower them ....

Fine, we get it. A bunch of communists who worship Soviet-Nazi dictator Franklin Roosevelt, the Islamic fascist who unleashed the atheist virus of Social Security upon America. But maybe there's a grain of truth to this socialist-Kenyan propaganda.

Maybe these "facts" and "figures" and "information" all add up to something true -- namely, that this really is the end of the line, and America has nothing to "look forward to" beyond a long, painful collapse. Except it's already happening, and in large part has already happened. It is here, now, and the Palins and O'Donnells and Glenn Becks and other nasty charlatans are just fighting over a plate of bones ... rich, fat-filled bones. [Roosevelt Institute]