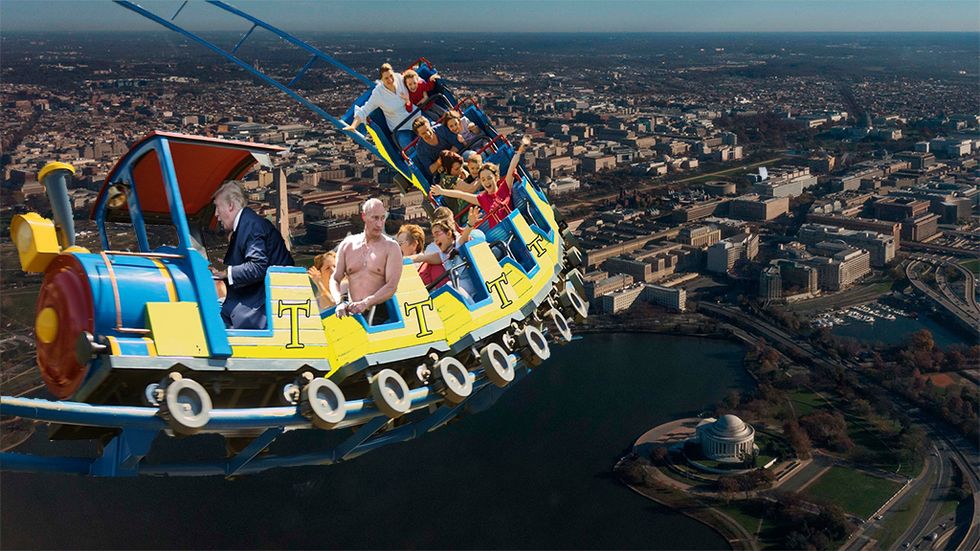 HOLD ON TO YOUR BUTTS! The Russian lawyer lady is back and she's telling reporters that she and DJTJ had agreed to a quid-pro-quo scheme where she'd give the Trump campaign "dirt" on Hill-dawg in exchange for dropping Russian sanctions -- BUT, when she arrived at the meeting without proof, Trump & Co. got all butthurt. WOAH, if true!

The House Intel Committee voted unanimously to release the Democratic memo countering Devin Nunes' vague outline. Trump can either keep it classified, unclassify it, or do nothing (which would eventually unclassify it).

Carter Page went on teevee to tell the world that he was butthurt and offended that the FBI spied on him while he was selling himself for rubles, stating it was "even worse than I could have possibly imagined."

Trump's lawyers are trying to convince him not to talk with Robert Mueller because they fear Trump's tendency to pathologically lie could lead him into a "perjury trap."

Steve Bannon is supposed to show up at the House Intel Committee today, but the rumor mill on the Hill is that he's going to ignore the subpoena and chillax on his couch in some cargo shorts chugging Red Bull and eating Chinese food until it's time for another depression nap.

Hannity and Devin Nunes embraced each other and openly wept on national television like two brave men who aren't afraid of a world that doesn't understand their love of tinfoil hats and cheese-filled hot dogs.

Tucker Carlson and DJTJ pressed their hands against the glass  and told themselves they were winners through repressed sobs.

With (another) potential government shutdown looming days away, House Republicans think they've finally found a way to make everybody happy by giving $659 billion to the DOD and kicking the can down the road (AGAIN). The bill has hit the Hill like a shart in church.

As Trump's opioid czar, Kellyanne Conway is ignoring the advice of health professionals and is instead relying on political appointees, touting a border wall, and pushing a "just say no" campaign. Hopefully we'll get new DARE swag before the next Burning Man.

A leaked DHS draft document recommends the constant extreme vetting and surveillance of Sunni Muslim men on a "long-term basis" due to their potential to be "at-risk" for "terrorist narratives." You know, like neo-Nazis, "white horse" Mormons, and homebrew militias.

For the second day in a row, the stock market nosedived and Republicans tried to distance themselves from any semblance of accountability, despite the fact that Trump was literally boasting about the market as the DOW sank over 1,000 points before the closing bell.

Global markets are tanking this morning, but don't worry, all is well.

As the Dow tanked for the second day in a row yesterday, the "alt-right" crazies began to rant and rave about false flags, while Hannity blamed Obama in a convoluted buzzword salad that concluded the markets are actually doing great. This is only a trust fall.

Tax professionals are warning that the divorce rate may spike this year thanks to the Trump tax cuts (for the super rich), which include a provision for reducing the alimony deduction in the highest income brackets. If you rush to divorce so you can grab a disappearing tax benefit, that probably does say something about the marriage, huh?

The first legal case against Trump's border wall will meet a familiar face on Friday as Gonzalo Curiel is set to decide over the legality of Congressional waivers from 1996 and 2005 that allowed the federal government to ignore environmental protection statutes.

A former pro-Trump group is launching an ad campaign to criticize Trump's "amnesty" plan to let Messican babies steal all the dirty jobs.

The Public Health Service can't figure out how to pay workers the "special pay" designed to attract dentists, pharmacists and veterinarians to government service. Good thing there isn't a dark cloud hovering over government coffers...

Administrator of the Centers for Medicare and Medicaid Services Seema Verma is quietly working to institute caps on Medicaid benefits, so all the jobless poors will stop sucking off Uncle Sam's titty and self-abort.

Andrew Janz is Devin Nunes's Democratic opponent in California's 22nd; though the deep red district favors Nunes, Janz has been hauling in hundreds of thousands in cash over the last few days, potentially giving Nunes a real fight.

Missouri Republicans are having second-second thoughts about how to beat Democratic Sen. Claire McCaskill as they remain perpetually haunted by the ghost of "legitimate rape."

Incensed that the SCOTUS can tell them what to do, Pennsylvania's top Republican legislators want to impeach the LIBERAL state Supreme Court Justices for finding Republican-drawn congressional maps were gerrymandered.

Since there's no medal for winning the race to the toilet, about 1,200 security staff for the 2018 Winter Olympics have been quarantined after they started suffering cases of the hots, the trots, and the squats.

As Mike Pence worms his way to the Winter Olympics, he noted he wasn't sure if he would meet with a North Korean delegation to prevent a thermonuclear holocaust by stating, "We'll see what happens."

Bitcoin has lost about 70% of its value in about two months, a loss of about $550 billion Ameros. LOL, suckers.

Don't be fooled by people trying to scare you with "face-swap" videos. If you're not A Idiot who is fooled by Russian troll bots or Fox's fake news, you'll embrace the same technology being used to put Nicolas Cage into every movie ever made.

A new 18-month study out of Oxford University has found Trump supporters are more likely to share "junk" political news on social media due to the increasingly insulated environments that only talk about Her Emails.

Rather than yelling, screaming, and slamming the phone down, millenials are slut-shaming scammers, posting videos of "scam-baiting" to warn people how scammers work, and explaining how to protect yourself.

We're 100% reader supported and ad-free, and we need your help to keep the bill collectors at bay!