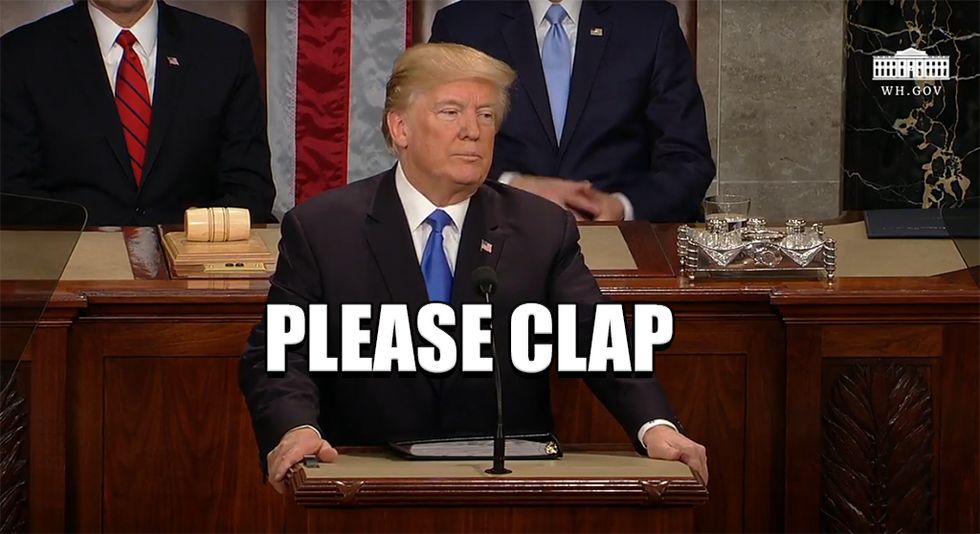 Morning Wonketariat! We're well rested, and your Editrix is on the road! Here's some of the things we may be talking about today, but first, ADORABLE SNOW CRITTERS!

The DOJ has turned over a bunch of papers to Robert Mueller's team that include Jeff Sessions's resignation letter, and a bunch of emails of people losing their shit about Mike Flynn being "You're Fired."

Deputy AG Rod Rosenstein and FBI Director Christopher Wray ran over to Trump's White House and begged John Kelly to convince Trump not to release Devin Nunes's book report, warning that it would be very bad. Kelly called them both cucks, put on a MAGA hat, and ate a taco bowl.

The Republican strategy to discredit the FBI and Trump-Russia investigation is being driven largely by Devin Nunes, even if it undermines his credibility as a yuppie farm lawyer from California.

Even though Trump has said he's "looking forward" to sitting down with Robert Mueller, Trump's lawyers are stalling, saying that Mueller's case hasn't met the threshold for interviewing Trump.

Trump's first State of the Union was unnecessarily long and slow, touching on topics like immigration, infrastructure, and military spending, then he lied like a son of a bitch and implied that black people are assholes for ruining sportsball over civil rights, and that Mexicans are raping everyone who doesn't die in a hurricane. [Fact Check]

Republicans are balking at Trump's proposals, with one GOP leadership aide noting that, while it was a good speech (for him), "None of that matters if he goes back and tweets crazy shit.” That could happen!

The Democratic response by Rep. Joe Kennedy criticized the bullies in politics who have turned American "life into a zero-sum game" where only the rich prosper, a message lost on Republican blowhards who wondered whether or not Kennedy was drooling like one of Hillary's email-controlled lizard people.

After his long, obnoxious spiel, Trump was caught on a hot mic being asked by South Carolina Rep. Jeff Duncan to release Devin Nunes' memo, to which Trump replied "Don't worry. 100%!" [Video]

As Trump lied through his surgically perfected teeth during the SOTU, nonpartisan fact-check site Politifact crashed for a short period of time.

The Congressional Hispanic Caucus is fed up with all the stonewalls they keep hitting on immigration, calling recent meetings with Democratic leaders "testy" as the House Freedom fuckers and Paul Ryan keep acting like dicks.

There isn't even a proposal to build Trump's stupid wall and there's already lawsuits alleging corruption and grift in potential Tortilla Curtain contractors.

With the federal deficit ballooning to over a trillion dollars, most of the old and decrepit Congresscritters are passing the buck off to jobless millennials with their own mountains of student loan debt. Thanks, Olds.

Yesterday Trump signed an EO to keep Gitmo open and full of bad hombres who might pee on one of his buildings (if they left their extrajudicial military detention center in Not America).

The Senate approved the nomination of David Stras to the US Court of Appeals for the 8th Circuit after Chuck Grassley ignored the blue slip from Minnesota Sen. Amy Klobuchar.

During a private lunch with TV news talking heads, Trump railed against Chuck Todd and Lester Holt, calling Todd a "monster" and accusing Holt of editing his "Shakespearean" comments. For contrast, here is an actual Shakespearean actor.

Air Force Tech. Sgt. Geraldine Lovely posted a racist video on social media about how black airpeople are mean and disrespectful to her. How...lovely.

The guy who sold the ammo for the assault rifles used in the Las Vegas mass shooting is full of sads because his bullets were used to kill 58 people and injure 851, telling local reporters that he "couldn't tell that this guy had evil in him." Lucky for him the NRA says that guns and ammo don't kill people. We need better evil detectors.

Child smoking advocate and former Mississippi Gov. Haley Barbour was arrested for trying to bring a loaded gun on an airplane after he "forgot" it was in his briefcase.

Trump has dropped his pick for South Korean ambassador, Victor Cha, after Cha said attacking North Korea was a bad idea. Cha has penned a blistering op-ed in response.

The new Pentagon plans for war in Russia and China have "elements [that] are overlapping but not the same," according to vice chairman of the Joint Chiefs Gen. Paul Selva. Hurray...more war...

An Australian newspaper bought a filing cabinet from a thrift store and found about a decade's worth of internal government documents on matters from police fuck-ups to stripping of civil and social rights. [Source]