Mueller Made Flynn Plead Guilty, So Now Trump Has To Call Flynn A Dirty Liar. Sad! 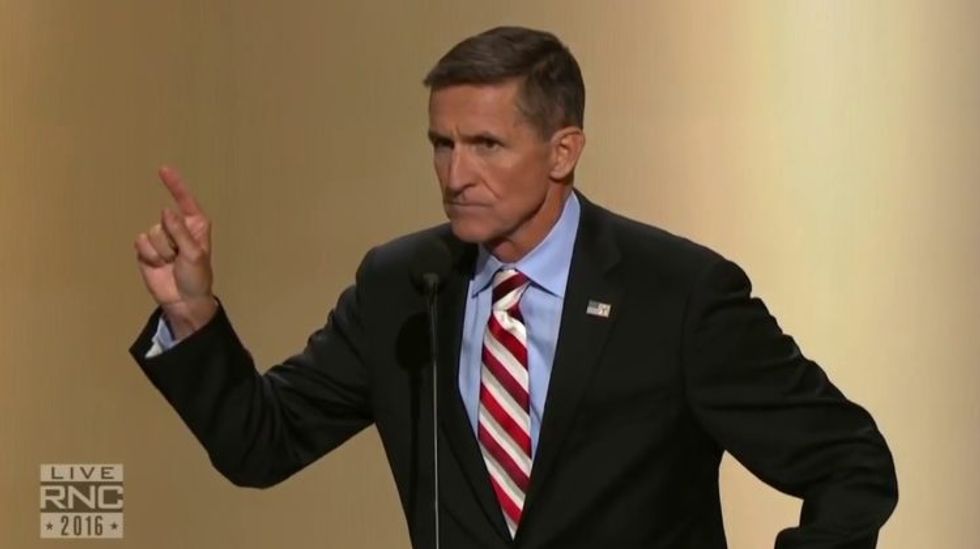 That's right! Lock me up!

At least some people still believe in Michael Flynn, who pleaded guilty to lying to the FBI in a deal to cooperate with special prosecutor Robert Mueller. Flynn's brother Joseph is on the case! After Trump tweeted about a Fox & Friends story yesterday, proclaiming the Dossier a great big fakey-fake, Joseph Flynn posted his own impassioned but incoherent call for justice, which stayed up for about 15 minutes -- just long enough for Newsweek to grab screenshots (we've combined their two images into one, full disclosure):

Apparently Joe Flynn thought that phrase "the illegitimacy of his confessed crime" was a tad ambiguous and left the impression that his brother might have done something "wrong," which is of course impossible since Mike Flynn is a great patriot. He later submitted another reply, possibly after someone pointed out the first one sounded a tad deranged, and that Trump might not appreciate the bitter implication that trump hadn't done enough for the general so far:

We suppose we ought to do a little bit of fact-checking here while we're at it -- no matter what Trump says, the intelligence community's investigation into Russian interference in the 2016 election wasn't prompted by the Steele dossier, and neither was the investigation into Flynn's lying to the FBI about his own post-election phone calls to Russia's ambassador to talk about ending sanctions. For that matter, the dossier hasn't been discredited, some parts of it have been confirmed, and the Clinton campaign wasn't its original sponsor anyway. Other than that, Mr. Trump...

In any case, it sure is unfair how Robert Mueller forced Flynn to accept a plea bargain to one count of lying to the FBI, when he could have prosecuted Flynn for so much more, like failing to disclose his lobbying for Turkey and taking payments from Russia, not to mention his alleged involvement in that stupid -- and failed -- plot to go outside judicial channels to send a dissident back to Turkey so Erdogan could execute him. (By which of course we mean kidnapping the cleric from his American home, and THEN sending him back to Turkey so Erdogan could execute him.)

Of course, now we learn that Trump's legal team is preparing to attack Flynn as a lying liar -- who's admitted lying to our brave agents of the FBI! -- if Flynn accuses Trump or his staff of wrongdoing, which is presumably why Mueller offered Flynn that plea deal. Trump tried running interference for Flynn for long enough, pleading with James Comey to just let the poor man be and constantly talking about what a noble wonderful guy he is, but once Flynn sings to Mueller, then obviously it'll be time to throw him under any bus that might be handy, assuming it's not being used to block reporters from seeing Trump golfing.

Trump’s legal team has seized on Flynn’s agreement with prosecutors as fodder for a possible defense, if necessary. In court filings, the retired lieutenant general admitted that he lied to the FBI about conversations he had with the Russian ambassador to the United States during the December 2016 transition.

“He’s said it himself: He’s a liar,” said one person helping craft the strategy who was granted anonymity to describe private conversations.

So far, says the Post, Trump's lawyers are certain Flynn won't be able to back up any claims of collusion between the Trump campaign and Russia with any of the documents that have been turned over to Mueller or Congress:

None of those records suggest a conspiracy by Trump or his inner circle to improperly work with Russians to defeat Democratic candidate Hillary Clinton, according to people who have reviewed the documents.

Just as long as nobody was stupid enough to write down "We are meeting with Russia Thursday to violate election law, BYOB," they should be in the clear, they figure.

The Post also talked to legal experts who said the strategy of attacking Flynn's credibility would be expected in any case where a witness takes a plea deal. Defense attorney and former prosecutor Barbara Van Gelder agreed that attacking Flynn's plea agreement would be "textbook":

“They will pull out all the arguments: ‘You pleaded guilty. You don’t have anything more than your word, and you probably got your son off with this. You got the deal of the century,’ ” she said.

Of course, the actual plea deal doesn't really specify what information Flynn agreed to give Mueller in exchange for that guilty plea, so there's no telling what he may be able to hand over beyond just his testimony. (Please, God, let it be the pee tape. It won't be the pee tape.) Van Gelder said she's impressed by the way the deal was structured:

"That is what I thought was the brilliance of the Flynn plea,” she said. “It said: ‘I’m giving just enough to have the judge sentence you within the guidelines, but not giving anything to anybody else.’”

And of course, it's still entirely possible that Trump will pardon Flynn and then accuse him of lying anyway, because nothing makes sense at all anymore, the end.