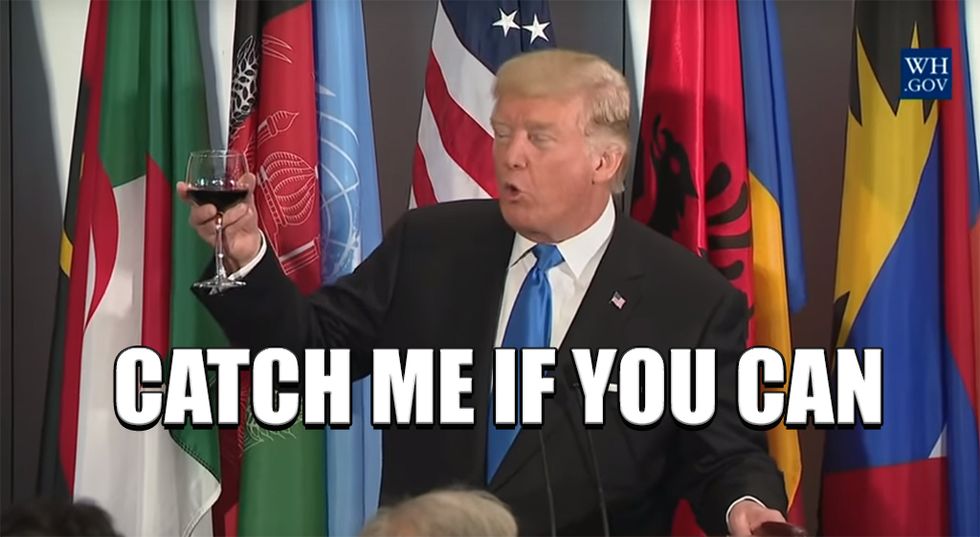 Morning Wonketariat! Here's some of the things we may be talking about today. (Today is Sept. 21, not Sept. 22. Headline FIXED!)

Last night's SCOOP O'CLOCK: Was Paul Manafort acting like a crappy spy for Russia just to get paid? Was Russia trying to get a golden shower from Trump? Sexciting!

Robert Mueller may not need to pull Trump's tax records as there's already a treasure trove of chatter between Trumpkins about Comey and Mike Flynn that seems damning.

Chuck Grassley has pussed out on bringing in Paul Manafort to talk about Trump-Russia; instead he's sending out subpoenas to the FBI for Comey crap.

Looks like Robert Mueller is eye-fucking Sean Spicer and his naughty notebooks for the Trump-Russia investigation? MMM, just deserts!

As a reward for all their loyal service, Trump has given a bunch of campaign staffers gigs at the USDA, and they're just as clueless about farm policy as you'd expect.

The only thing in the EPA Scott Pruitt has expanded is his 24/7 protection detail, pulling investigators who would normally be looking for enviro-crime.

Trump says he's made up his mind about the Iran Deal, and sources are telling NBC that he's going to bail out. Of course, all that's news to Rexxon.

As the Democratic party does some serious soul searching, people are wondering what's in store if hard-liners won't come to the table.

SURPRISE! Former employees of Trump's DC trash palace are alleging racial discrimination from staff and guests after wanting to get paid the same as the white guys.

While it's all fun under the sun in Hawaii, locals are preparing for nuclear holocaust. Remember, kids, duck and cover!

The St. Louis Post-Dispatch is demanding that charges be dropped against journalists arrested during its kettling tactic this past weekend, highlighting the seriously fucked up maneuvers being used to silence and screw with people.

Here's some thinkery for you to get uneasy about: Russia seems to be helping North Korea skirt US fuel sanctions. LOL, remember yesterday when Trump tweeted about the lines at DPRK gas pumps?

Paul Manafort might be under investigation for all his Not American blood money, but that hasn't stopped him from branching out to the Middle East where he's helping to push for an independent Iraqi Kurdistan. What could go wrong?

Trump's digital ad wizards are buying up ads on Facebook to tell your batshit relatives the wall is coming. Eventually.

HUH. Russian Facebook fuckery in Florida during the 2016 election geared towards gullible Trumpkins happened over a dozen times. I think that's just the beginning.

Twitter is now in the sights of Trump-Russia investigators who believe that it might have been used for Russian chit-chat during the 2016 election.

A federal court told victims of the OPM hack that they're not getting any money from Uncle Sam, even though large swaths of personal information on government employees is floating around the web. .

The SEC says a filing system was hacked last month and that the thieves/hackers may have run off with personal info.

Trump and his White House have a secret hard-on for CNN's Jim Acosta. It must be the hair.

That video of Lawrence O'Donnell having a bitch-fit on camera seems to have Andy Lack shenanigans written all over it.

And here's your late night wrap-up! Stephen Colbert found the worst campaign ad of 2018 (so far); Jimmy Kimmel thinks Brian Kilmeade is a star-fucking ass-kisser with a nose covered in shit; Seth Meyerschecked in with Dana Rohrabacher; The Daily Show and Lewis Black 'splainer the real problem with healthcare; James Corden found the address for Trump's legal defense fund; Samantha Bee sent Allana Harkin and Michael Rubens out to find hope at Netroots.

We're supported ONLY by readers like you, no ads, no nothin', so give us some money! Please, k, thx, bye!