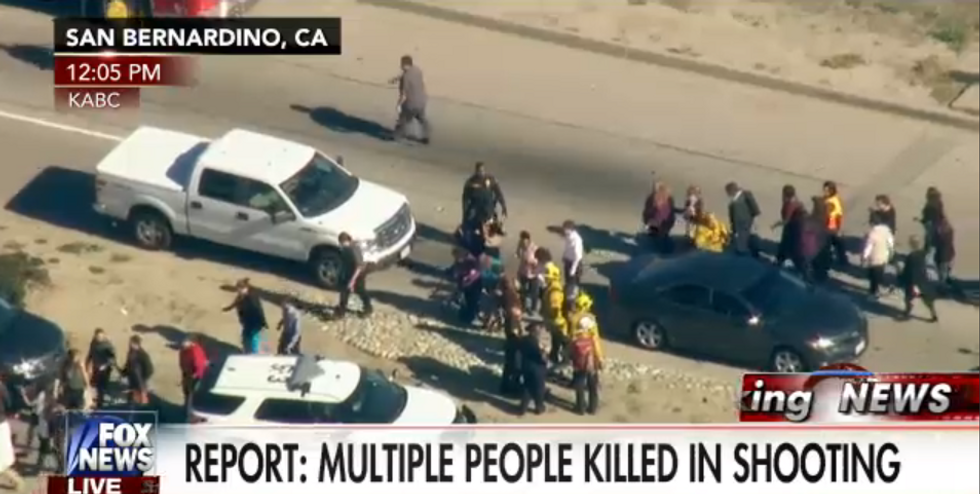 This post has been updated. Scroll down for the latest.

It’s a day in America, so of course there's been another mass shooting -- the second one today. This time, it's in San Bernardino, California, with at least 12 casualties reported and many more believed to be shot. Lt. Rich Lawhead, of the San Bernardino Police Department, says law enforcement can’t confirm any numbers at this point, but he’s heard the “20” number that’s being reported by local and national news stations.

The shooting was reported around 11 AM local time, at the Inland Regional Center, a facility that provides services to the developmentally disabled.

Authorities are calling it an "active shooter" situation. There are also reports of a bomb squad on the scene, trying to “neutralize an apparent explosive device,” so the news could get much worse.

According to The News, which is always correct, this particular attack might be a bit different from every single other attack we’ve had in the last several months, in that there are reports of up to three male shooters, possibly wearing "tactical gear."

On this subject, at least, Wonkette is not willing to speculate before we know concrete details, though the temptation is always there. Is this connected to last week's Planned Parenthood shooting? Could it be racially motivated? What about all the anti-Muslim hate going around? Is mental health a factor? Terrorism? We don't know, and neither do you.

Wonkette can confirm at least one gun is involved, because shootings involve guns, but we can also report that it is now, and ever will be, Too Soon to talk about that.

[contextly_sidebar id="aHLD1DyR4K9cYDNWbUWS0bLF3Rr9UIiR"]For more on how Wonkette will NOT be covering this tragedy, please refer to this guide we wrote after the horrific Virginia journalist murders.

President Obama will address the nation today, we are fairly certain. He has been briefed, and we can expect that he'll be even more pissed he was last time he had to do this, or the time before that, or the time before that. When that happens, we will bring you his words, and we will be horrified together that this has happened yet again, in the only developed country where this happens on a regular basis, and we'll turn the clock back to zero, certain that it won't be long before Next Time.

While we wait for more details on this 352nd American mass shooting in 2015, watch this video taken from the Inland Regional Center's holiday party, to see some of the people it helps:

The ICF Holiday Party is in full swing! ☃ pic.twitter.com/AzOCbliVmb

We will know more when we more. Until then, we will not.

UPDATE (5:16 PM ET): Representatives from the San Bernardino Sheriff's Office and San Bernardino Police Department just concluded a press briefing offering what they know at this point. Police Chief Jarrod Burguan stated that "preliminary reports" confirm "upwards of 14" are dead and "upwards of 14" are injured. Additionally, the FBI's Los Angeles Assistant Director in Charge David Bowdich clarified, "We do not know if this is a terrorist incident."

Several local, state, and federal agencies are at the scene and involved in the investigation. Authorities gave no details about the suspects, other than to say there were "up to three" gunmen, and that they escaped the scene in a "dark colored SUV."

Again, this information is subject to change, as the Inland Regional Center is still an active crime scene.