My God, My God, Why Hast Thou Forsaken Bill O'Reilly's Dumb Jesus Movie? 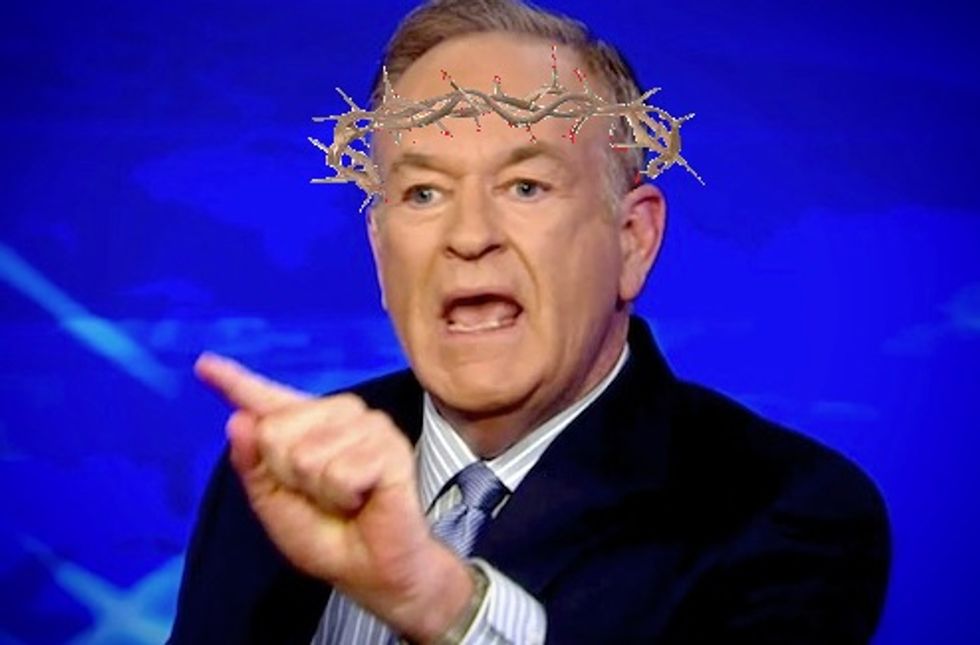 Bill O’Reilly “wrote” a “book” about killing Jesus -- it is cleverly called Killing Jesus -- and someone thought it would be a good idea to turn it into a teevee movie, because no one has ever made a Jesus snuff flick before.

On Monday, O’Reilly giddily reported that the movie was “the most watched program ever on the National Geographic channel.” That right there ought to prove O’Reilly’s god-given genius. But of course some liberals refuse to praise O’Reilly for his fine scholarly work. The fact that millions of people tuned in to watch the the horror show is, according to O’Reilly, “very bad news for the secular progressive movement, which sees Christian expositions as a threat to their political agenda.”

He is so right. All us godless liberals received our George Soros talking points on our Obamaphones, telling us our war on Christianity is in grave danger, thanks to the spectacular success of O’Reilly’s fanfic. And why is that? O’Reilly knows:

Opposition to abortion, gay marriage, legalized narcotics, and libertine behavior in general often comes from faith-based organizations and citizens. So any embrace of Christian tradition is a danger to the agenda of the left.

Well, sure. Because Jesus hated homos, whores, and reefer -- the very things liberals love most. And O’Reilly has indisputable evidence: all the articles from liberal commie rags criticizing the MOST POPULAR PROGRAM EVER (on National Geographic), based on THE MOST BESTEST BOOK EVER (written by God’s hand-picked tool, Bill O’Reilly).

“The far-left Guardian,” O’Reilly says, “is a good example.” Just look at this secular liberal propaganda smear job from The Guardian, as read by Bill O'Reilly:

These specials usually put O’Reilly’s patented conservative slant on retellings of history, something that wouldn’t really sit well with Christians. The book Killing Jesus fell into this trap, presenting salacious detail about Christ’s death and a Tea Party version of the son of God.

O’Reilly cites other far-left publications, like the Boston Globe, which inaccurately viewed the movie through its “uber leftwing prism,” instead of appreciating O’Reilly’s factual version of the life and death of Jesus. And while O’Reilly absolutely respects the right of critics to disagree, those “phony critiques” that do not praise Killing Jesus are obviously wrong and “designed to promote ideology above all.” Unlike O’Reilly’s book, obviously.

But O'Reilly knows the real reason, besides those other reasons, the godless liberal critics are attacking his masterful historical work. It is the "culture war in America," which is essentially a War on O'Reilly, which is even more essentially a War on God Himself. Because, as O’Reilly reminds his viewers with a clip from a prior interview, this book wasn’t his idea. It came from God!

All of the ideas come to me in the middle of the night. And one night, I just woke up and I went “Killing. Jesus.” And I believe, because I’m a Catholic, that come from the Holy Spirit. My inspiration comes from that. And so I wrote Killing Jesus because I think I was directed to write that.

Asked to explain why God would choose O’Reilly, of all people, to go forth and tell the heretofore untold story of how Jesus died, O’Reilly is far too humble to “speculate about the deity.” He is but God’s humble servant and transcriptionist.

I’m not the Chosen One, I’m just one of many who have been given gifts. I can write, and I can bloviate on TV. So I’m trying to use the gifts in a positive way, and I believe that’s all directed, and that’s why I’m here on the planet.

That should have cleared it all up forever, but nooooooo. Persecuted like Christ himself, O’Reilly was mocked by the “secular progressive left,” because “the concept of a Holy Spirit that provides inspiration to humans is a foolish superstition to them.”

Yup, that’s right. That’s the only possible explanation for why the left would mock Bill O’Reilly. Nothing to do with his fantastic fabrications about his “award winning journalism,” or how he has been on the frontline of every major battle in the world since Gettysburg, or how it’s just the slightest bit hard to believe that God came to O’Reilly at night and whispered in his ear, “Hey, you should devote a couple dozen episodes of your show to calling an abortion provider a 'baby killer,' at least until I choose another tool to shoot that doctor dead in his church.”

The truth is, it is open season on Christians in America, and faith is not held in high esteem in the halls of Manhattan media operations. A movie like Killing Jesus is a noble endeavor, even if you didn’t like it.

Well, of COURSE it is a noble endeavor. Not only is it based on a book by the world's greatest writer, Bill O’Reilly, but it came straight from a late-night conversation with God!

But to see what actually happened to a good man -- Jesus -- who preached loving your neighbor and loving God above all, to see how he was abused and murdered, historically, right before your eyes, is a powerful use of the motion picture concept. There IS a struggle in this country for power, for freedom, and for life-affirming behavior. Judeo-Christian tradition IS under assault. There is no question about that.

Hate to fact-check O’Reilly here, but there’s nothing in the "Judeo" tradition about telling the story over and over again about Jesus. Nor are Judeos all that concerned about the persecution of Christians in America. But go on, please, Mr. O’Reilly, with your God-given gift of bloviation.

Here in America, we often see Christians marginalized, mocked, portrayed as bigots and human rights abusers. Time to push back on that.

And how do we do that? Be sure to watch the rebroadcast of Killing Jesus right here on Fox News, on Good Friday and Easter, of course. Bill O'Reilly says so, and that's pretty much like hearing it directly from God.