Nancy Pelosi Backwards And In Heels. Wonkagenda For Thurs., Feb 8, 2018 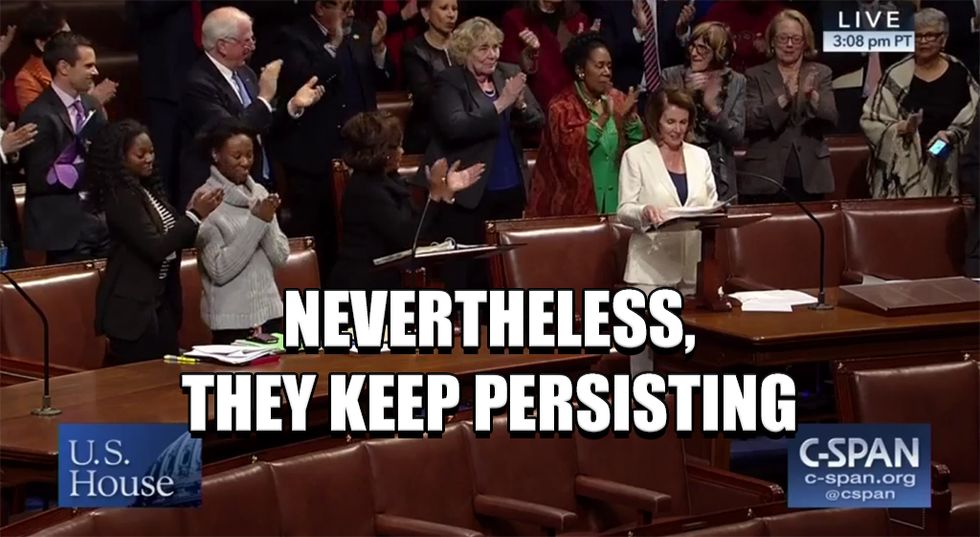 Over a year later, the DHS head of cybersecurity is admitting that Russia successfully penetrated "an exceptionally small number" of the 21 states is tried to hack during the 2018 election. Like maybe three of them? Thanks for the late breaking news.

Both Steve Bannon and Corey Lewandowski have told Adam Schiff to fuck off, with Bannon refusing to testify before the House Intel Committee unless the questions are the 14 pre-approved yes-or-no questions.

Nancy Pelosi gave an eight-plus hour filibuster-like speech on the House floor in defense of Dreamers yesterday in response to Paul Ryan and the Freedom Crazies continued refusal to acknowledge all the Not American children facing deportation. NOTE: She did it in 4-inch heels. That's fucking hardcore.

The Senate struck a budget deal yesterday to boost spending caps by $300 billion until the next presidential election, and shower the military in money, but there's growing concern that the bill may stall in the House. They have until midnight tonight to figure it out.

White House aides are calling Congress "cowards" for their inability to bow to the whim of our God-emperor in chief.

Elliott Broidy is a top GOP donor who was convicted in a 2009 pay-to-play scheme, and he's been drumming up his personal businesses while schmoozing Trump, Pence, and some known Romanian mobsters with Not American government ties. Good thing the RNC made him deputy finance chair, since their main finance chair has run into some trouble lately.

The DOJ quietly debunked that uranium thing and Democrats are pissed, so they wrote a mean letter detailing all the ways that it's pathetic bullshit.

More and more Republicans are blocking Trump nominees due to their inability to grant concessions on special interests like ethanol, nuclear waste dumping, immigration, marijuana, and foreign policy; now senior Republicans are telling them to knock off the intraparty bickering so they can continue their shenanigans.

Legal weed stores can't technically store their cash in banks, and as Republicans continue to ignore the small businesses generating billions in revenue, there's a new lobbying push for dispensaries to bank their secret stashes of cash.

Instead of helping the poors kick the pharmaceutical grade heroin-addicted monkey off their backs, Trump is going to "get really, really tough, really mean with the drug pushers and drug dealers."

Ted Cruz is dusting off his Tea Party crowd favorites for 2018, reminding everyone why nobody outside of Bumblefuck, Texas, likes him.

California Republican Rep. and "bro-caucus" member Duncan Hunter is so completely fucked now that the FBI and federal prosecutors are asking questions about how thousands of dollars went missing, and whom he might have been banging in the office. Hunter is defending himself by blaming his wife (who now lives with his parents), telling reporters, "it’s tabloid trash...I’m worried about this story that’s just going to talk shit about me for fun."

That Illinois Nazi running unopposed for his House primary was on CNN this morning denying the Holocaust and blaming Jews as he shook his fist at "poppycock."

Eric Holder and Barack Obama have been quietly shoving gerrymandering cases before courts in an attempt to unfuck the jerry-rigged voting system. [Morning Maddow]

The FBI says there's no evidence that a Border Patrol agent who ran his car into a ditch was murdered after an autopsy failed to show any signs of defense injuries, confirming the agent's original distress call that he "ran into a culvert." Obviously this is evidence of another deep state conspiracy.

A couple of tree huggers in California's government put Ryan Zinke on notice, reminding him that they have the power to deny oil companies permits to drill off their coast, and a large number of patchouli-soaked stoners are expected to harsh the vibe in a meeting of the Bureau of Ocean Energy Management today from 3pm to 7pm PST at the Tsakopoulos Library Galleria, (828 I St.) in Sacramento.

German Chancellor Angela Merkel has again formed a coalition government between the Christian Social Union and Social Democrats, leaving the German version of the "alt-right" as the main opposition party.

North Korea had another military parade in an effort to show Trump how a broke authoritarian country wastes money on useless pagentry, pomp and circumstance.

Fidelity Communications, a Midwestern telecom company, has been trying to curb stomp municipal fiber projects with astroturf campaigns, only admitting their deception when a videographer called them out in a one minute video.

Grateful Dead lyricist and Internet freedom fighter John Perry Barlow embarked on the the longest, strangest trip of all last night. He was 70, and we are totally bummed.

We're 100% reader supported and ad-free because George Soros never gave us a bailout. Help a website out!