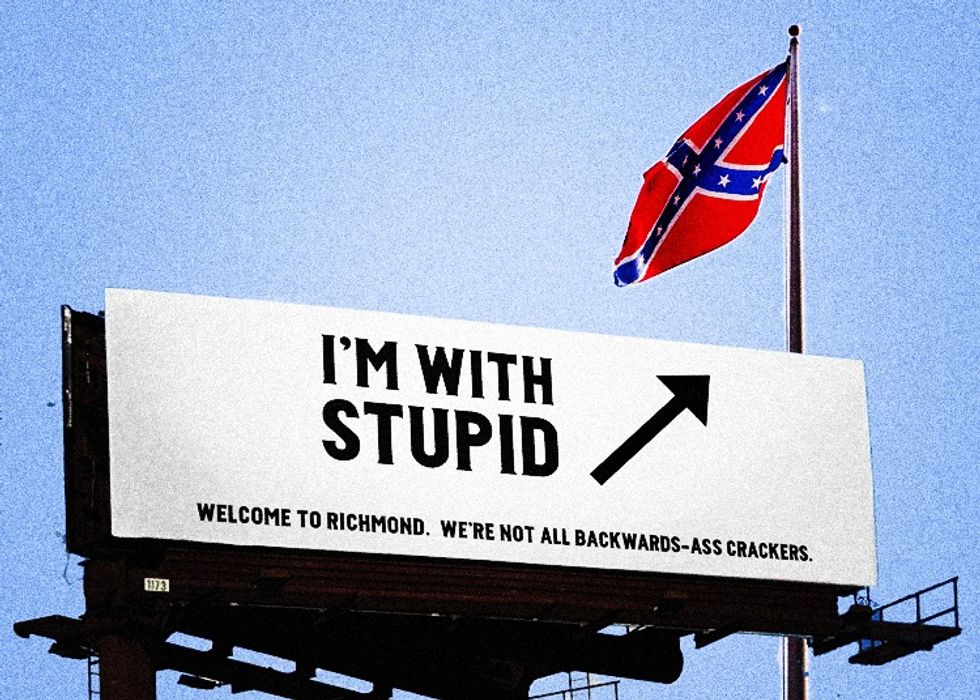 The fight over the Confederate Flag in the U.S. House of Representatives got weird Thursday, complete with shouting, bills being pulled off the floor, and, most terrifying of all, open and flagrant deployment of parliamentary procedure. The fuck-tussle was a sequel to Wednesday's butthurt-fest by southern Republicans who sought to undo a Democratic move to limit display of Confederate flags in national cemeteries; in response, House Minority Leader Nancy Pelosi introduced a separate resolution that would have banned the display of Confederate symbols in the U.S. Capitol. Rather than going on record for or against the treason banner, Republicans voted instead to refer the bill to committee, essentially punting on the issue.

The whole mess started Tuesday, when Democrats successfully added amendments to a funding bill for the Department of the Interior that would have ended the practice of inviting Confederate fetishist groups to decorate Confederate soldiers' graves with little Confederate flags on Lost Cause Day or whatever they call it, and would also have pulled Confederate flag-themed merch from gift shops at national parks. Angry southern Republicans threatened to pull their support for the Interior bill, which has some lovely giveaways to corporate polluters that are very dear to GOP leadership, and so Wednesday night, Republicans introduced a new amendment to strip out the previous amendments and go back to prior US Parks Service policy. By Wednesday morning, however, it looked like that amendment would fail -- and Republicans would also have had to go on the record as being for or against the Confederate flag. So instead, the GOP leadership bravely turned around and ran, sending the Interior bill back to committee so nobody would have to say, "Yes, I think that flag should be displayed on Confederate soldiers' graves on We Committed Treason And Lost Day."

Speaker John Boehner tried to frame the move as a chance to facilitate reasonable dialogue (translation: have no honest dialogue at all):

“I actually think it’s time for some adults here in the Congress to actually sit down and have a conversation about how to address this issue,” Boehner said Thursday. “I do not want this to become some political football. It should not. And so I would expect that you’ll see some conversations in the coming days.”

After the Interior bill was pulled, Pelosi immediately introduced her new measure that would remove all Confederate-type flags from the Capitol -- a move which would have barred the display of the Mississippi state flag. The resolution was nearly identical to one introduced last month by Rep. Bennie Thompson, the only black member of Mississippi's congressional delegation. Thompson pointedly does not display his state flag at his congressional office, and had introduced his version of the bill in response to the Charleston massacre as a means of pressuring the state to remove the Confederate emblem. Thompson told The Hill,

We are a nation of laws. We should not identify with symbols of hatred and bigotry. That flag, those symbols, should be put in a museum. They should not be flown under any circumstance where there is freedom and dignity in this great institution of ours.

Thompson's resolution went nowhere, though, getting shunted off to committee to die. Before re-introducing the proposal Thursday, Pelosi noted that House Republicans were defending the Confederate flag on the anniversary of the adoption of the Fourteenth Amendment, with its guarantee of equal protection. Not that it's really possible to shame some of these guys, but Pelosi certainly gave it a good shot:

But Pelosi's resolution went the same way as Thompson's, with an immediate call to send it to committee:

Chaos ensued. As the House clerk read the motion to exile the measure to a GOP-controlled committee, Democrats started shouting in protest. When a voice vote was called, Republicans yelled "aye," while Democrats loudly shouted "no." Republicans won, and the Democrats responded by yelling, "vote! vote! vote!" -- challenging the Rs to vote on the flag-removing measure and not duck the issue.

Ultimately, the Democrats insisted on casting their votes by paper ballot, not electronically, which further slowed down the process, just for the sake of making it clear that Democrats were pissed. And even some Republicans seem tired of having to cater to the delicate sensibilities of their treason-honoring colleagues. Rep. Mike Simpson of Idaho would prefer that southern members of the House just come out and say where they stand before the issue does any more political damage to the GOP: "We’ve put our heads [out] like a pumpkin on a stick and given [Democrats] a baseball bat,” he said.

Now come on, Rep. Simpson -- you say stuff like that, and you're just baiting people to run up against the Commenting Rules for Radicals. Stop trolling, dude.