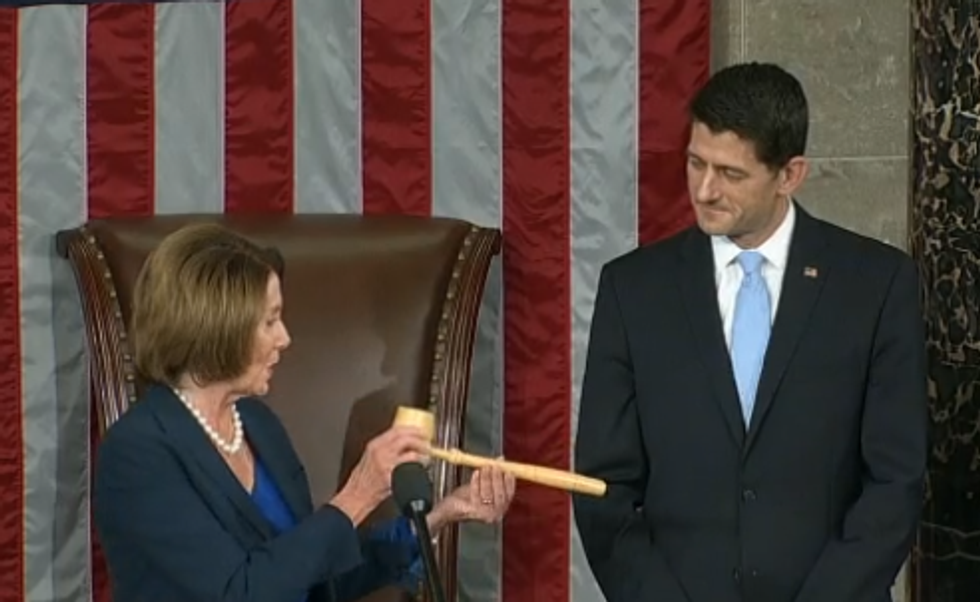 She, as always, is sticking that thing right up Paul Ryan's ass.

It is no secret that we at Wonkette love Nancy Pelosi very much, as she is a badass liberal California womyn who drives Republicans up the god-dang wall, and also she knows how to whip the vote real good-like. So we are happy to report that Pelosi has offically tossed her hat in the ring to be the boss of House Democrats, and moreover, says in a letter that she already has the support to stay on as House Minority Leader:

"It is with both humility and confidence that I write to request your support for House Democratic Leader," Pelosi wrote in a letter sent to all House Democrats on Wednesday morning. "As of this writing, I am pleased to report the support of more than two-thirds of the Caucus."

HA YEAH, unless there's something happening in the House that the polls haven't caught, that's yoooooge and bigger than Brexit, and maybe Pelosi didn't spend enough time campaigning in Pennsylvania. Oh wait, that was Hillary. Anyway, all hail Leader Pelosi!

Now, if you'll remember, the Democrats' official elections for party leaders in the House have been pushed back until after Thanksgiving, because some young whippersnapper House Democrat types want to take some time to work through their feelings after the election HAHA JUST KIDDING, SERIOUSLY WONKETTE IS SO MUCH KIDDING RIGHT NOW. Actually, they have some valid concerns, and Pelosi would do well to keep them in mind. For instance:

OK, so Tulsi Gabbard is kind of a weirdo, but we agree that it's incumbent upon #AllDemocrats to make sure that, after Trump's first two years of failure, they are well positioned to speak to the concerns of All Americans, even bizarro white dudes who were like "I voted for Obama twice but he didn't snap his fingers and give me a pony, so let's pick Hitler instead!" The worst thing anybody can do right now is say, "Mistakes: Let's not learn very much from them!"

For her part, Nancy Pelosi said in her letter that hell yeah, let's learn from the mistakes and correct the problems and go beat ass, because beating ass is what she does. And really, Wonkette would like her to bring in the #youngs as much as possible, so that we as nice, decent U.S. Americans might have #hope.

Meanwhile over in the Senate, Chuck Schumer is officially the boss of Democrats, and Elizabeth Warren and Bernie Sanders and Tammy Baldwin have also been elevated to leadership positions. Hooray for smart progressives!

Also, West Virginia Sen. Joe Manchin got a leadership position, because TAKE THAT, REPUBLICANS, we Democrats also have a conservative motherfucker white guy dickface from an economically disadvantaged white guy place, and WE'RE KEEPIN' HIM. (Especially since Manchin has flirted with switching parties. Schumer's gotta keep his foot up his ass.)

Anyway, we are heartened to see congressional Democrats choosing to stay and fight hard for this country, and we look forward to them fulfilling their God-given destinies as mean red wasps who live in the part of Donald Trump's butt canyon that he can't reach.