National Review Calls Bernie Sanders A Nazi, For The LOLs 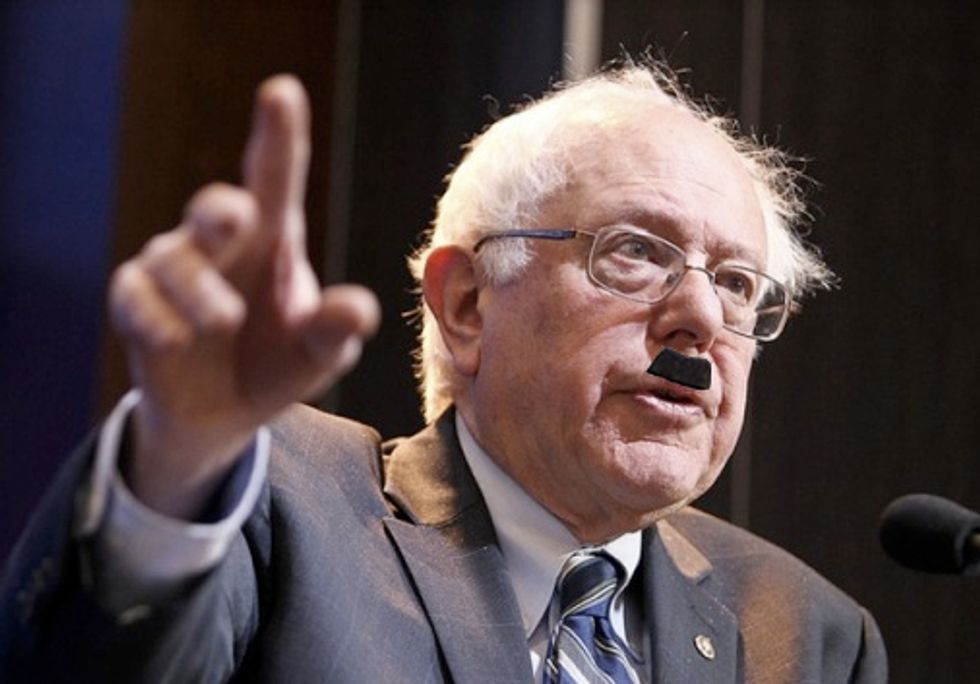 The National Review's Kevin D. Williamson is pretty annoyed that anyone thinks he called Bernie Sanders a Nazi, because the word "Nazi" appears nowhere in his article where he explains that Bernie Sanders is totally a national socialist. And it's true! That word never appears! If you're too stupid and intellectually lazy to recognize nuance and read the whole article, that is not Kevin D. Williamson's fault.

Williamson even recognizes that some people might be put off by calling Sanders a national socialist, which is a pretty big concession for a guy who in the past dramatically chronicled how he bravely survived an encounter with a 9-year-old black child, explained that women who have abortions should be hanged by the neck until hey embrace Austrian economics, and harrumphed that Mitt Romney should have gotten 100 percent of the women's vote because women like rich men who are at least as virile as Mitt Romney, while Barack Obama's weak seed brought forth only daughters.

In the Bernieverse, there’s a whole lot of nationalism mixed up in the socialism. He is, in fact, leading a national-socialist movement, which is a queasy and uncomfortable thing to write about a man who is the son of Jewish immigrants from Poland and whose family was murdered in the Holocaust. But there is no other way to characterize his views and his politics.

It's really unfortunate, but gosh darn it, facts are facts, and Kevin Williamson has to follow them to their unfortunate conclusions, even if it might seem like he's calling a man "whose family was murdered in the Holocaust" a Nazi, which is a word Williamson never uses. But instead of praising Williamson for his willingness to speak uncomfortable truths, even those that make him queasy, there's simply no alternative to calling him a national socialist, since he is both a socialist, kind of, and an economic nationalist. And also, too, like some other national socialists, a huge white supremacist xenophobe whose speeches are reminiscent of other Germans. But not the Nazis, heaven forfend:

The incessant reliance on xenophobic (and largely untrue) tropes holding that the current economic woes of the United States are the result of scheming foreigners, especially the wicked Chinese, “stealing our jobs” and victimizing his class allies is nothing more than an updated version of Kaiser Wilhelm II’s “yellow peril” rhetoric, and though the kaiser had a more poetical imagination — he said he had a vision of the Buddha riding a dragon across Europe, laying waste to all — Bernie’s take is substantially similar.

Silly us, we thought that Bernie has been saying vanishing American jobs were the fault of American manufacturers and investors who shaped trade and tax policy to benefit international corporations, but no, he's actually heaping all the blame on the Heathen Chinee.

Williamson uses some Free Trade Facts to provide additional evidence of Bernie's pernicious -- if perhaps unconscious, to be charitable -- racism:

Bernie worries a great deal about trade with brown people — Asians, Latin Americans — but has never, so far as public records show, made so much as a peep about our very large trade deficit with Sweden, which as a share of bilateral trade volume is not much different from our trade deficit with China, or about the size of our trade deficit with Canada, our largest trading partner. Sanders doesn’t rail about the Canadians and Germans stealing our jobs — his ire is reserved almost exclusively for the Chinese and the Latin Americans, as when he demanded of Herself, in the words of the old protest song, “Which side are you on?” The bad guys, or American workers “seeing their jobs go to China or Mexico?”

Take that, you terrible race-baiter! You're even trying to drag Hillary Clinton into your web of national socialism!

F.A. Hayek’s Road to Serfdom notwithstanding, corralling off foreign-made cars does not lead inevitably to corralling off foreign-born people, or members of ethnic minorities, although the Asians-and-Latinos-with-their-filthy-cheap-goods rhetoric in and around the Bernieverse is troubling. There are many kinds of Us-and-Them politics, and Bernie Sanders, to be sure, is not a national socialist in the mode of Alfred Rosenberg or Julius Streicher.

He is a national socialist in the mode of Hugo Chávez. He isn’t driven by racial hatred; he’s driven by political hatred. And that’s bad enough.

Haha, all you stupid liberals thought that Williamson was calling Sanders a Nazi, but you were just too lazy to read to the end of the article, where we learn that he's actually a dead Venezuelan commie! Also, too, Donald Trump called John McCain a hero four times.

Williamson is pretty proud of his achievement at Hitlerrolling all the hypersensitive libs, in fact:

As Matt Yglesias notes at Vox, while Williamson says it's kinda racist -- but not in a Nazi way -- when Sanders talks about the effects of foreign trade on American workers, it's pretty smart conservatism when Kevin Williamson suggests that American economic policy should put Americans first, and clamp down on all the illegal immigrants, too.

The real question is, considering that Bernie Sanders is a national socialist whose family connection to the Holocaust makes Kevin Williamson queasy, why are liberals so intent on putting words in his mouth? Say what you will about the tenets of national socialism, Dude, it's not always a Nazi ideology.