Nazi Mother-In-Law Fucker Off To Jail. But Not For Assaulting His Lover's Daughter (His Wife) 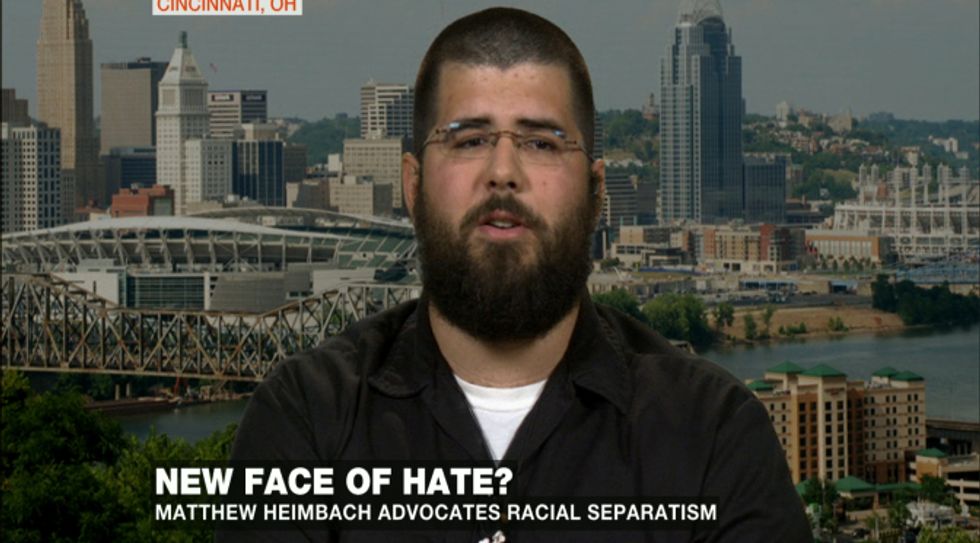 He just wants a country where a man can be white and (allegedly) beat up his wife.

UPDATE: At this point, we're not going to rewrite our headline, because meh. But we have the relationships all wrong here! See end of story for correction. Poor Matthew Heimbach. Last year, the leader of the Traditionalist Workers Party was riding high on the Nazi wave that followed Donald Trump into office. He was even talking about running for office himself, after he helped Trump get elected by beating up black protesters at a 2016 Trump rally (although after he was sued by the protesters, he entered a doomed counterclaim against Trump, for inciting him to beat on the protesters).

Heimbach was also charged with misdemeanor harassment for repeatedly shoving one of the protesters, Kashiya Nwanguma; in 2017, he pleaded guilty to second-degree disorderly conduct, and the judge suspended the sentence of 90 days in jail -- on the condition that he not re-offend for two years.

Oopsies! In March of this year, Heimbach was charged with battery after allegedly beating up his wife, Brooke Heimbach, and his spokesman, Matt Parrot, in a seriously bizarro altercation at the Indiana trailer park where the Heimbachs live. Matt Parrot is Brooke Heimbach's father-in-law; he's married to Jessica Parrot, who despite the name is not a character in Who Framed Roger Rabbit.

Update: Sorry, we goofed! Brooke Heimbach's mom is not a party to any of this. While she was previously married to Matt Parrot, they are divorced now, and Jessica Parrot is Matt Parrot's current wife. There's a chart at the end of the post.

Oh, yeah, one other detail: Matt Heimbach and Jessica Parrot had been having an affair, then broke it off, then got together again -- very close together, in bed, while Brooke Heimbach and Matt Parrot spied on them through a window. Mr. Parrot burst in on the amorous couple, and then Mr. Heimbach allegedly beat up Mr. Parrot and Mrs. Heimbach. Brooke Heimbach recently filed for divorce; it's not clear whether Jessica intends to become an ex-Parrot.

Those shenanigans didn't sit well with the judge in Heimbach's case back in Louisville, who noticed that March 2018 was definitely less than two years from Heimbach's plea agreement in the rally assault case (fine, disorderly conduct). On Tuesday, District Court Judge Stephanie Pearce Burke ordered Heimbach to spend 38 days in jail for violating his probation agreement.

Susan Ely, who leads the county attorney office's criminal division, said the 38-day sentence was the result of negotiation and that Heimbach could serve the remaining 52 days if he re-offends again.

"We wanted the absolute guarantee that he went into jail today," Ely said.

As Heimbach was about to be taken off in handcuffs -- with a big smile on his face, according to the Louisville Courier Journal -- Judge Burke told the white supremacist jerkwad, "I really hope that I do not see you back in this court."

Oh, yes -- Heimbach still faces domestic battery charges for the beat-down in March, so that could get him additional jail time in Indiana once that goes to trial. Guess he's not going to be able to take any jobs in the Trump administration any time soon.

Please remember, O Terrible Ones, that while Matthew Heimbach is truly a waste of perfectly good atoms, our Commenting Rules for Radicals remain in effect. Yes, even though he is a Nazi and a very bad person.

UPDATE/CORRECTION: Seems that in all the confusion, we got the relationships all mixed up ourselves. Jessica Parrot is not related to Brooke Heimbach. Matt Parrot is Brooke's stepfather; her mother, who divorced Parrot before all this, is completely uninvolved in the Nazi Love Swastika. Happily, someone made a chart, so don't ever accuse Twitter of being useless again. This is far more confusing than remembering whether Dirty Harry fired five shots, or six.

Glad we could clear that up. If we did. If anyone wants to make a flowchart in the shape of an actual swastika, that might be helpful, although we aren't sure it's geometrically possible.

Wonkette regrets the error, and ever knowing anything about these people.

Don’t take for granted that the institutions you love will always be there, like not having so many goddamn Nazis, and Wonkette. Click to save at least one of them!