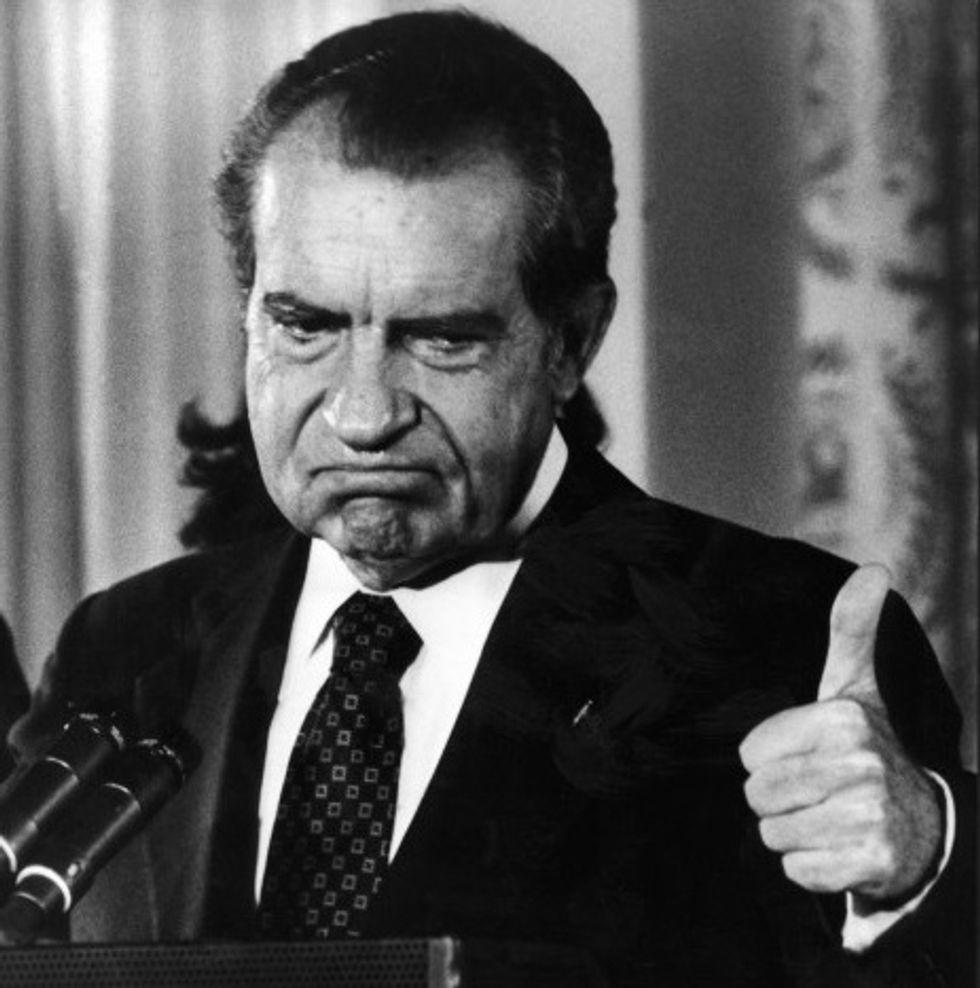 Every bit as sleazy as you thought.

So now we know: Richard Nixon almost certainly tried to keep the South Vietnamese government away from peace talks during the Lyndon B. Johnson administration, largely settling one of the great "Yeah, we thought so" questions of American history. Notes taken by Nixon aide H.R. "Bob" Haldeman show Nixon directing aides to "monkey wrench" the peace talks, which had been announced just the week prior to the election. Nixon always denied any involvement in dissuading the South Vietnamese away from the negotiations, but the notes, found in the Nixon presidential library by historian John A. Farrell while working on a forthcoming biography of Nixon, appear to confirm Nixon tried to sink the peace talks to keep Hubert Humphrey from benefiting from an end to the Vietnam war.

There’s really no doubt this was a step beyond the normal political jockeying, to interfere in an active peace negotiation given the stakes with all the lives [...] Potentially, this is worse than anything he did in Watergate.

It was already known that Nixon ally Anna Chenault, the widow of Gen. Claire Lee Chenault -- the famous leader of the "Flying Tigers" during WW II -- had served as Nixon's go-between to the South Vietnamese government, and that she had urged Saigon's ambassador to stay out of Paris peace talks announced by the Johnson administration in late October 1968, because if Nixon won the election, he could supposedly win the South Vietnamese a better deal in the talks.

Learning of this through wiretaps and surveillance, Johnson was livid. He ordered more bugs and privately groused that Nixon’s behavior amounted to “treason.” But lacking hard evidence that Nixon was directly involved, Johnson opted not to go public.

The notes Mr. Farrell found come from a phone call on Oct. 22, 1968, as Johnson prepared to order a pause in the bombing to encourage peace talks in Paris. Scribbling down what Nixon was telling him, Mr. Haldeman wrote, “Keep Anna Chennault working on SVN,” or South Vietnam.

A little later, he wrote that Nixon wanted Senator Everett Dirksen, a Republican from Illinois, to call the president and denounce the planned bombing pause. “Any other way to monkey wrench it?” Mr. Haldeman wrote. “Anything RN can do.”

So yes, that sure as heck looks like Nixon doing his very best to undercut a possible peace deal that might have won Humphrey the election -- oh, and shortened the Vietnam war by five or six years.

In addition, the notes show Nixon asked his running mate, Spiro Agnew (which Dick Cavett discovered anagrams to "grow a penis") to threaten CIA head Richard Helms he'd lose his job in a new administration if he didn't provide inside information to the Nixon campaign:

He seems as nice as we always thought he was.

The New York Times piece on the Haldeman notes points out that while several historians agree Farrell has nailed down what most have only concluded from circumstantial evidence, there are still quite a few known unknowns to the history that can never be resolved:

Still, as tantalizing as they are, the notes do not reveal what, if anything, Mr. Haldeman actually did with the instruction, and it is unclear that the South Vietnamese needed to be told to resist joining peace talks that they considered disadvantageous already.

Moreover, it cannot be said definitively whether a peace deal could have been reached without Nixon’s intervention or that it would have helped Mr. Humphrey. William P. Bundy, a foreign affairs adviser to Johnson and John F. Kennedy who was highly critical of Nixon, nonetheless concluded that prospects for the peace deal were slim anyway, so “probably no great chance was lost.”

So we can't say for certain that had Nixon not engaged in his ratfuck of the peace talks, Humphrey would have won or a peace agreement would have been worked out even if he had. The article also notes it's unclear whether LBJ would have gone public with Nixon's interference if he'd had proof, although Tom Johnson, then a note taker for White House meetings about the issue, thinks it would have made all the difference:

“It is my personal view that disclosure of the Nixon-sanctioned actions by Mrs. Chennault would have been so explosive and damaging to the Nixon 1968 campaign that Hubert Humphrey would have been elected president,” said Mr. Johnson, who went on to become the publisher of The Los Angeles Times and later chief executive of CNN.

As it turns out, the war went on for another five years under Nixon, who didn't actually have a secret plan to end it. Another 22,000 Americans and god only knows how many Vietnamese died in the war during Nixon's tenure, not to mention the expansion of the war into Laos and Cambodia. On the up side, Nixon sure won that election in 1968, didn't he?

History nerds should go read the full article, which includes a nice sampling of historians arguing over just how groundbreaking Farrell's discovery is, and while you're at it, take a look at Farrell's own piece about the Haldeman notes in Sunday's NYT. And if you're of a mind to, you can pre-order Farrell's biography, Richard Nixon: The Life, which will be out in March. That little linky will give Yr Wonket a nice kickback, yay.

Also, hey, have you guys heard any other presidential candidates promising they had a secret plan to end a war, or trying to influence American foreign policy before even taking office? You'd think they'd know that's a pretty scummy, even illegal, thing to do. Ah well. Those who fail to learn from history are American voters.