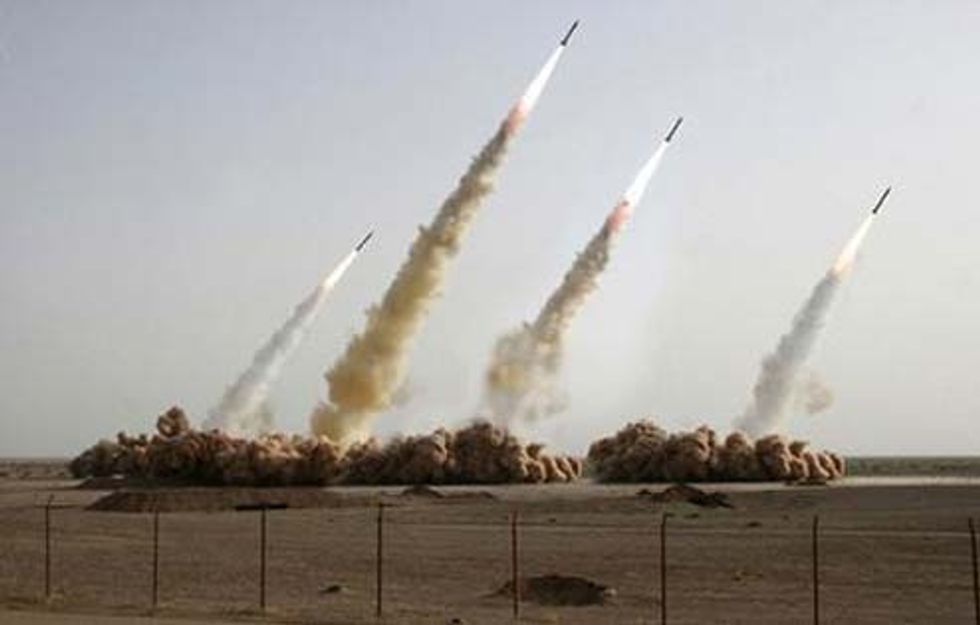 Israeli Prime Minister Benjamin Netanyahu has an MBA and worked for a consulting firm before getting involved in Israeli politics, so he knows a little something about livening up a boring presentation with graphics. Unfortunately the fuddy-duddies at the U.N. nixed his innovative PowerPoint idea, or maybe their projector didn't have the right port for him to plug his laptop into (Thunderbolt is the new hotness, guys, get with the program), so he had to use this drawing of a comical cartoon bomb, of the sort that Wiley E. Coyote would use on the Road Runner, instead. If you were the underling tasked with Israeli U.N. presentation graphic design, what icon would you have used? Some suggestions, after the jump!

How about a V-2 rocket? It's very iconic, with the fins and all. Plus it's much more vertical than the cartoon bomb, which means it's better for use as an impromptu uranium enrichment-measuring bar graph. And it was invented by actual Nazis, which really adds an extra protection-of-the-Jewish-people zing to the image.

They could also Photoshop this classic picture from 2008, in which the Iranian government already Photoshopped in extra missles to make their missile launch more scary looking. Each extra missile represents another 10% more uranium enrichment. Plus it will teach the Israelis and Iranians that sometimes they have the same PR goals!

Or maybe the problem is that the Bibi's bomb wasn't cartoonish enough? Perhaps we should introduce a wacky, bumbling character named Kaboom! (translation into Hebrew and/or Farsi pending) who would represent the Iranian nuclear program, spouting anti-Semitic rants and getting into hijinks. "Hey, Zionist filth, I'm almost to the 90% level ... whoooops, another one of my scientist friends just got assassinated! Wha-hey!" "THAT'S OUR KABOOM!"

Meanwhile, Raytheon is working on a Water-Based Bomb Wick Dousing System, which will be marketed to interested governments at a reasonable eight-digit price. [Guardian]