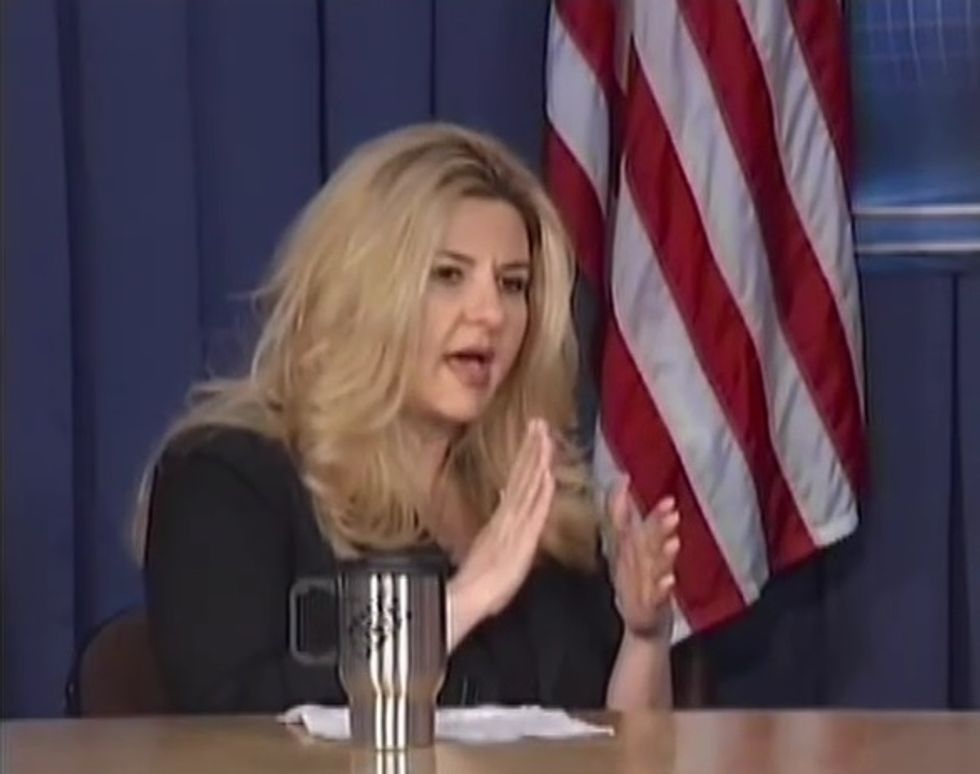 Our new One-l'd wingnut darling, Nevada Assemblywoman Michele Fiore (R-Bundy Ranch Groupies Club), has come up with an innovative idea to put an end to sex trafficking: Just castrate all the pimps, and your problem's solved!

Fiore shared her thoughts on the topic on Nevada Newsmakers, recounting a suggestion she'd made during a committee meeting with Democratic Assemblywoman Teresa Benitez-Thompson, who's sponsoring a bill revising and toughening Nevada's laws on human trafficking. Fiore's all in favor of getting tough on trafficking, but thought maybe Benitez-Thompson was missing a much more direct approach to the problem:

If you really want to get serious about stopping the pimps and stopping this horrific activity with sex trafficking our children, come to us, the legislators, with a bill for chemical castration or straight-up castration.

You have to admire someone willing to address a complex problem by taking a simple, straightforward, commonsense stance that sounds like it comes straight out of Sharia -- maybe we could cut off thieves' hands, too? Still, Fiore was on a roll:

[When] we have these heinous crimes of rape and murder and sex trafficking of children, I have zero tolerance for it and I think the solution would be castration

It's good to know that Fiore is against rape and murder of children, which are already illegal. She also seems to maybe be overlooking the victims of trafficking who are adults -- and most frequently brought into the country illegally by traffickers. And then there's the minor detail that while those forced into prostitution are certainly victimized by pimps, even a castrated pimp would still be able to turn a pretty good profit from forcing women and children into prostitution. It's the johns, not the pimps, who are having all the sex; castrating the pimp just gives you a pimp who can't get an erection. For all we know, Fiore would probably be OK with cutting off their nutsacks as well, or maybe since that might result in too many angry customers of the sex trade, she'd offer them a waive of mutilation.

Further, Benitez-Thompson's bill addresses other victims of trafficking as well -- people forced into debt bondage or just plain slavery working in sweatshops. We feel fairly safe in predicting that Fiore would argue they're just illegal immigrants who are taking American jobs and should simply be deported. Who knows, maybe she'd like to mutilate them too, so they don't try to sneak back into the country.

Comes right down to it, Fiore is pretty jazzed by the idea of solving a problem by cutting off some nuts, because she is A Idiot. As she explained to host Sam Shad, no man wants to lose the use of his tallywhacker:

If you think, if -- you are a man -- I really seriously think that would take a big effect -- when these pimps understand that it is going to cost them their most valued possession.

Well, fine -- if she's in favor of taking away pimps' tricked-out Escalades, that may be a more reasonable solution.