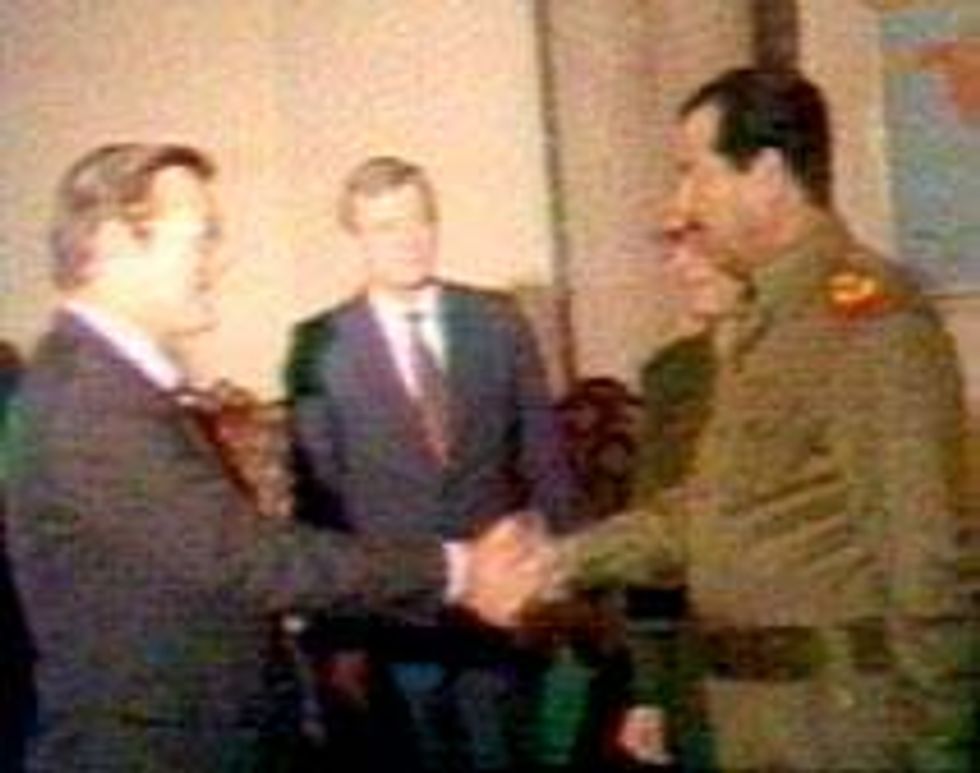 In the summer of 2001, while most Americans were first and foremost worried about shark attacks, our newly installed neocon foreign policy leaders had their eyes on the real enemy, the one man who was working tirelessly to destroy us: Saddam Hussein. This evil dictator, whose plans for world conquest had received a minor setback a decade earlier when the vast majority of his armed forces and military hardware were destroyed, was assembling a fearsome arsenal of chemical, biological, and nuclear weapons to strike at us. The only thing that could sap America's resolve to finish the job and kill the guy who tried to kill the president's father after the president's father tried to kill him? Why, Saddam Hussein's very best friend, Osama bin Laden, who spent much of 2001 running a disinformation campaign (with the liberal CIA's help) meant to stop our heroic march to Iraqi victory.

Today's New York Times reminds us of the days when the Bush Administration's heroic foreign policy advisors were almost -- almost -- distracted from their primary mission:

The direct warnings to Mr. Bush about the possibility of a Qaeda attack began in the spring of 2001. By May 1, the Central Intelligence Agency told the White House of a report that "a group presently in the United States" was planning a terrorist operation. Weeks later, on June 22, the daily brief reported that Qaeda strikes could be "imminent," although intelligence suggested the time frame was flexible.

But some in the administration considered the warning to be just bluster. An intelligence official and a member of the Bush administration both told me in interviews that the neoconservative leaders who had recently assumed power at the Pentagon were warning the White House that the C.I.A. had been fooled; according to this theory, Bin Laden was merely pretending to be planning an attack to distract the administration from Saddam Hussein, whom the neoconservatives saw as a greater threat. Intelligence officials, these sources said, protested that the idea of Bin Laden, an Islamic fundamentalist, conspiring with Mr. Hussein, an Iraqi secularist, was ridiculous, but the neoconservatives' suspicions were nevertheless carrying the day.

But the neocons did not give up the fight to defeat Saddam! This led the pro-Iraq forces to take ever more desperate measures. For instance, "On July 9, at a meeting of the counterterrorism group, one official suggested that the staff put in for a transfer so that somebody else would be responsible when the attack took place," like a bunch of whiny babies. Then, in early September, Osama bin Laden did manage to organize a massive terrorist attack on the United States, the aftermath of which delayed our important work in Iraq by more than a year. But we persevered, and that is why Iraq is a flourishing democracy today.

The Bush Administration officials who gave their all to spread freedom are still vocal defenders of their work:

Haha, Ari, we think we see a flaw in your reasoning! You see, a "truther" is someone who thinks that the Bush Administration orchestrated a series of attacks inside the United States and managed to pin them on foreign terrorists, in a conspiracy that must have involved hundreds of people and yet left no fingerprints behind. This would involve a staggering degree of competence, which is why only crazy people believe it. [NYT]