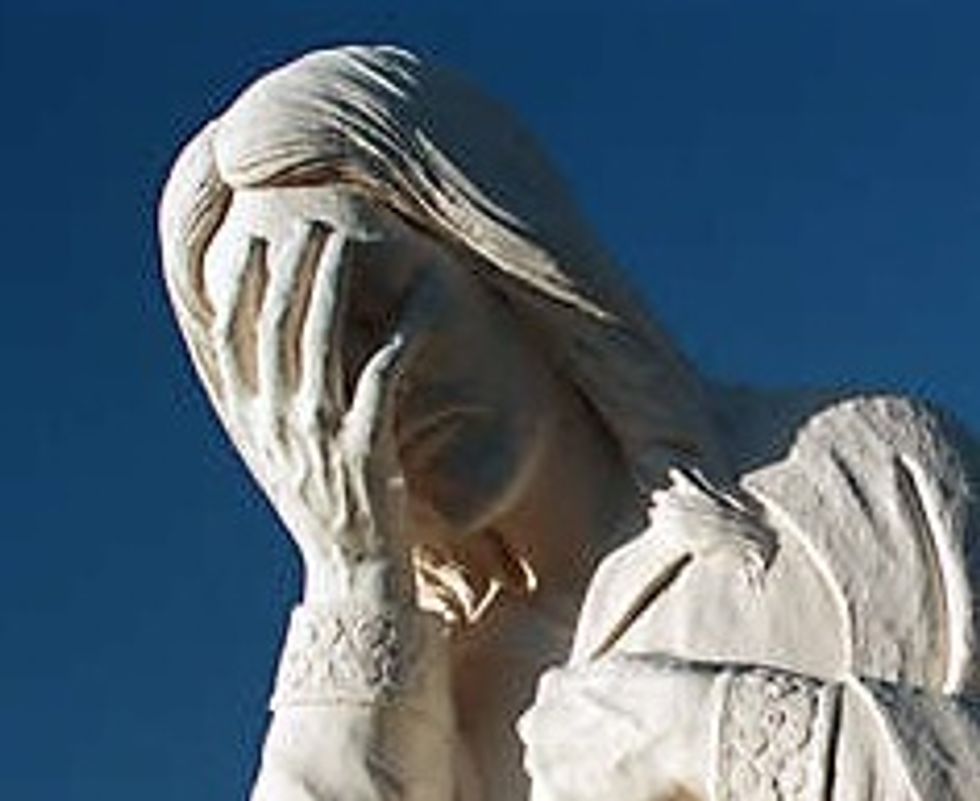 Seems like only yesterday we were singing the Catholic Church's praises for showing the tiniest (the very tiniest) bit of humanity toward The Gay. On Monday, we heard the good word that New Pope and pals were talking about maybe talking about being nicer to The Gay, because maybe they are also people too. A document leaked from their Synod Sleepaway Camp, in which they wrote -- shudder! gasp! -- that "homosexuals have gifts and qualities to offer the Christian community." And we said, "Good job, Catholic Church, that's a nice step forward."

Under furious assault from conservative Catholics, the Vatican backtracked Tuesday on its surprisingly positive assessment of gays and same-sex relationships. [...]

But many conservatives complained that the statement watered down church teaching and did not accurately reflect their discussions here, where nearly 200 Catholic leaders are meeting to debate pastoral approaches to modern family life.

Cardinal Raymond Burke, for example, whined that "homosexual relations are intrinsically disordered," and he is going to hate The Gay forever, no matter what anyone says. We assumed that New Pope would simply shun him for being not very Christlike, since New Pope is supposedly into this whole new weird thing about the Catholic Church trying to be more like Jesus than, say, Pat Robertson. Ha ha, our bad some more!

In response to such reactions, the Vatican backtracked a bit Tuesday. In a statement, it said the report on gays and lesbians was a "working document," not the final word from Rome.

The Vatican also said that it wanted to welcome gays and lesbians in the church, but not create "the impression of a positive evaluation" of same-sex relationships, or, for that matter, of unmarried couples who live together.

You know what's weird? A bunch of unmarried dudes who live together saying that it's wrong for other dudes to live together. Don't you think that's weird? And isn't living with other dudes kind of exactly what Jesus did? Oh no, did we just go and point out the hypocrisy of the Catholic Church again? We sure do feel NOT AT ALL ONE TINY BIT sorry about that.

Now we get to wonder just what in the hell is going on in the super secret for-men-only-but-not-in-a-gay-way (ahem) clubhouse. Whatever the final version of the document is, we're guessing it's not going to be "Hey, we read the Bible and found out it doesn't actually say 'God hates fags' in there after all!" If the Vatican has to immediately rush out and assure all of its followers not to worry, the Church still sincerely believes The Gay is bad and wrong and will burn in hell, but maybe we could use our polite inside voices when we tell them that, that doesn't exactly deserve much praise. Or any.

And should we even bother to mention that an organization that has spent millions of dollars to cover up its global and very widespread epidemic of priests raping kids -- because, see, it's the pedophiles who need protection because "charity" -- is not exactly in a position to evaluate anyone else, positively or otherwise? Nah.