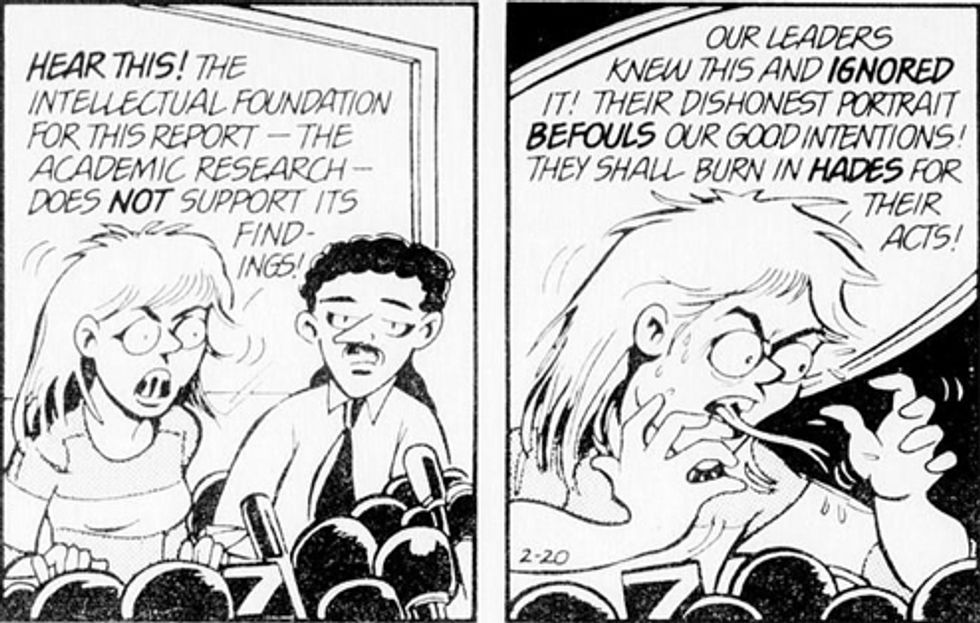 Well this is embarrassing, or would be if hucksters had any shame: JZ Knight, the New Age goofball who was briefly big on the woo-woo circuit when she claimed she could "channel" the thoughts of a "35,000-year-old warrior" named "Ramtha," is trying tosue the chainmail pants off a couple of former followers who videotaped her ranting against Jews, Mexicans, gays, and the ancient Hittites, who really shouldn't have to put up with that crap from a lousy Lemurian.

Apparently at a drinking game/wine ceremony/Spirit Hoedown in 2011 at her Ramtha School of Enlightenment (RSE) in Yelm, Washington, the channeling got a bit out of hand:

Knight delivered her speech while students followed her in a drinking game, taking a drink of wine every time she did. Wine ceremonies have been a ritual at RSE since 1996, where students are taught to believe that wine grapes were brought to Earth by extraterrestrials 450,000 years ago.

And what kinds of insights did she offer into the True Nature of things?

“Fuck God’s chosen people! I think they have earned enough cash to have paid their way out of the goddamned gas chambers by now,” Knight told her students in the released video. Knight explained “I’m telling you this, every goddamn Mexican family is a Catholic—they’re breeding like fucking rabbits,” before adding that “all gay men were once Catholic women.”

Not bad! Pity that Andrew Dice Clay's act got old around the same time that Ramtha's did.

The RawStory piece has a whole lot of fascinating details about Knight's career in the Spiritual Leader game; she discovered Ramtha in 1977 through Pyramid Power, and he revealed himself to her when she put a construction-paper pyramid on her head:

Ramtha, a 7-foot-tall apparition of golden glitter clad in a purple robe, appeared in her kitchen.

“I am Ramtha the Enlightened One. I have come to help you over the ditch,” he told her.

And yes, children, it is so: the drugs in the 1970s flowed so freely that Knight managed to make a career of that shit, with all sorts of high-paying celebrity followers who should know better. Knight also had another career boost from the 2004 movie What the Bleep do we Know!?, which did extreme violence to the idea of quantum physics and featured a number of celebrities embarrassing themselves in the name of New Age idiocy.

The former students whom Knight is suing, Virginia Coverdale and David McCarthy, released a 16-hour video of Knight on a bender, including a bit where she says that God is a “psychotic, insecure son of a bitch,” which we really don't have any disagreement with, as well as announcing,

“Fuck Jehovah,” in Ramtha’s voice, before claiming Jesus as a fellow alien who came to Earth to teach the same basic philosophy.

Man oh man is she gonna be in trouble when the REAL Jesus finds out about this.

Coverdale is appealing a $600,000 judgment against her, and McCarthy has a case scheduled to begin next May. Despite Knight's efforts to scrub the video from the internet, it keeps popping up (but no, we don't have a copy to embed -- not even highlights). Knight is quite unhappy about the tapes, which she claims are full of unfair digital sorcery:

“Those tapes were illegal from the get-go, and that they were distributed, edited and chopped to make us look like bigots and hateful people when nothing could be further from the truth, nothing!” she charges. “I will not let other people rewrite our history!”

Chances are, she was probably just saying a lot of nice things about how good the Jews are at money management, and she should know, because she has this one accountant. Still, it's nice to see she's taking a stand against fraud. Maybe she and Operation Save America could set up an exchange program.

Yr Wonkette attempted to contact the souls of Ambrose Bierce, H.L. Mencken, and Bertrand Russell for comment on a spiritualist phenomenon that should be thoroughly extinct in the 21st century, but they had the good sense to stay dead and not say anything.

[AlterNet via RawStory, via the Wonket Tipline]

Follow Doktor Zoom on Twitter. He's sort of glad that there was a Ramtha, otherwise there'd be no Hunk-Ra.