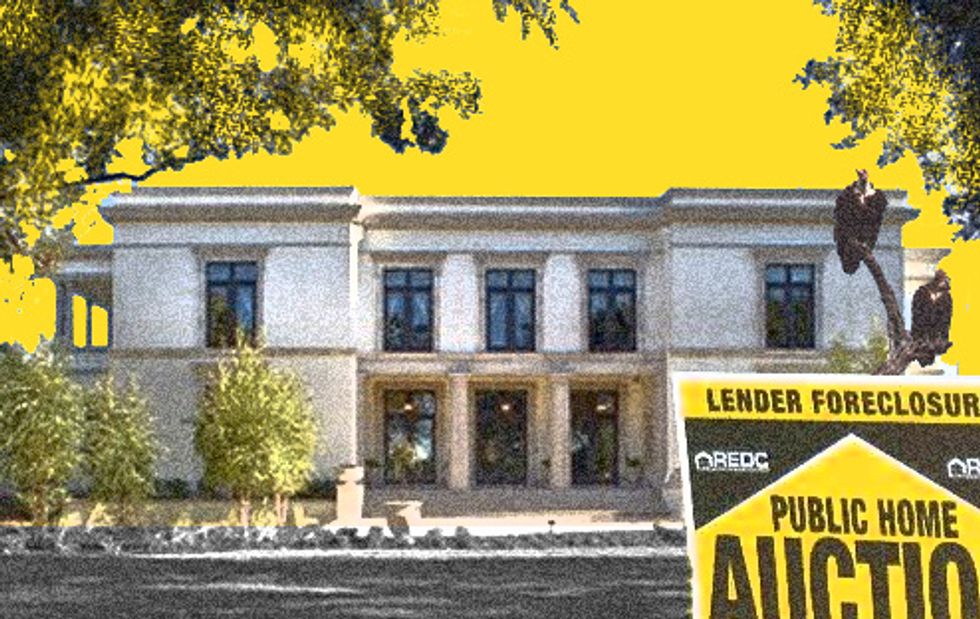 Nothing else legal is as evil as the American Housebuilding Industry. Pretty much everything wrong with this country -- from the oil wars it fights abroad to the morally crippled exurban old people at Tea Party rallies to their unwanted adult children living in squalid fourth-ring apartment complexes on a diet of SSI and methamphetamine -- can be blamed on the boom-bust construction-financing cycle of destructive, mindless residential tract cancer growths across this once-pretty nation. But even after the massive global disaster caused by the American construction/mortgage Ponzi scheme, there's still a residential construction industry! And it is having a festival or convention or whatever, in Florida (obvs), and it is here that these awful people anointed the8,400-square-feet single-family mausoleum you see here as the "New American Home of 2011."

This year’s New American Home is 8,400- square-foot concrete structure in Orlando, Fla. During a tour of the four-bedroom house last week, we searched for new ideas that would be useful for Culturemap readers in Texas. The home’s design can best be labeled “modern classical,” says the home’s interior designer Kate Clarke of Continental Interiors of Winter Park, Fla.

The New American Home highlights an interesting design idea for luxury builders — the master bedroom hub. The central hub room is a private, windowless octagon-shaped room with comfortable seating, a fireplace and a television. Spinning off from the hub are the three “spokes” of the master suite — a gigantic walk-in closet; a large bathroom with dual showers, spa tub and a urinal; and the bedroom.

Ha, yes, this sounds very interesting. Finally, a windowless room with a television ... and a urinal. If there's a slot for the pizza delivery guy to just slide the box right there to the urinal/teevee, you're set!

Except you're not, of course, because this is a foul fantasy from a dead era. Some 8,400-square-foot Florida McMansion box holds little appeal for the Modern Decamillionaire Executive -- try something in the 75,000-square-foot category, that's mostly underground and built of bunker-thick concrete, because there are going to be millions of people rioting through the cities and suburbs in the coming years. [Marketwatch]