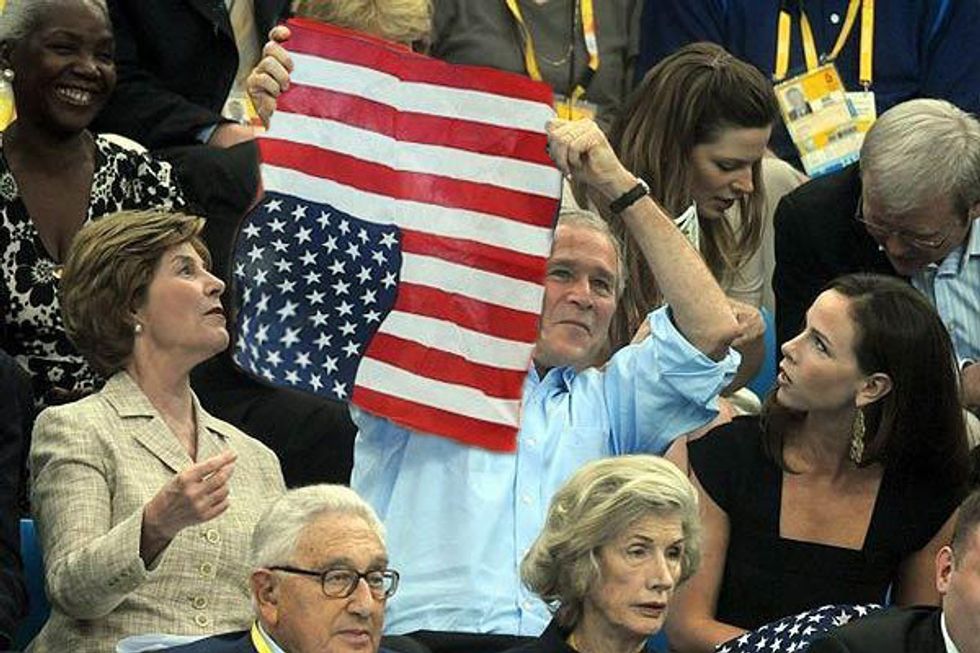 Things are pretty bad now. Many liberals are angry, depressed, or both. We wasted our breath for years, saying "Hey rich folks, we know you don't love paying taxes, but these people you're manipulating with ridiculous lies in order to win elections -- maybe stop? Because they're idiots, and they could be dangerous?" Nobody listened. Which reminds us of another time nobody listened to liberals: Always, but especially when George W. Bush was president.

Today's tumble down the memory hole is courtesy of the New York Times as they excerpt/adapt digestible chunks of Peter Baker's new book "Days of Fire: Bush and Cheney in the White House." How many amusing pull quotes are there? All of them, Katie

“Am I the evil genius in the corner that nobody ever sees come out of his hole?” he once said. “It’s a nice way to operate, actually.”

Not exactly. You're the evil... genius, fine, that nobody WANTS to see come out of his hole. Close though. More Cheney:

Once his friend David Hume Kennerly greeted him teasingly by saying: “Hi, Dick. Have you blown away any small countries this morning?” Without missing a beat, Cheney replied, “You know, that’s the one thing about this job I really love.”

It's like Bizarro West Wing, only less overwrought. On old spinster Condoleezza Rice:

Over lunch one day in the first term, Rice told Christine Todd Whitman, then the Environmental Protection Agency administrator, “I can count on one hand the days when I have not spoken to the president over the last three years.” As Whitman later reflected: “She didn’t have a life. Her life was all about that.”

When Cheney’s turn came up, a devilish look crossed his face. “Whatever you do,” he said, “make sure you’ve got the vice president under control.”

Normally we hate people less if they're funny. It's not so much working here. Yet more Cheney the Undead, grappling with a human concept called "justice":

To Cheney, it was a simple matter of justice. As he saw it, Libby had been pursued by an unprincipled prosecutor bent on damaging the White House. Neither Libby nor anyone else had been charged with the actual leak that precipitated the investigation, only with not testifying truthfully about how he learned about Wilson’s identity.

All he did was lie to a grand jury! C'mon, humans! Now, see if you can spot the irony here as Cheney responds to Bush after learning that Libby won't be pardoned:

“You are leaving a good man wounded on the field of battle,” Cheney snapped.

All five "read mores" of this thing are worth a look; however, be warned: it somewhat humanizes people that you likely despise. That can be uncomfortable for some folks. Overall, the lesson is this: Things may be bad now, but in a few years they'll make for a good book to blog about.