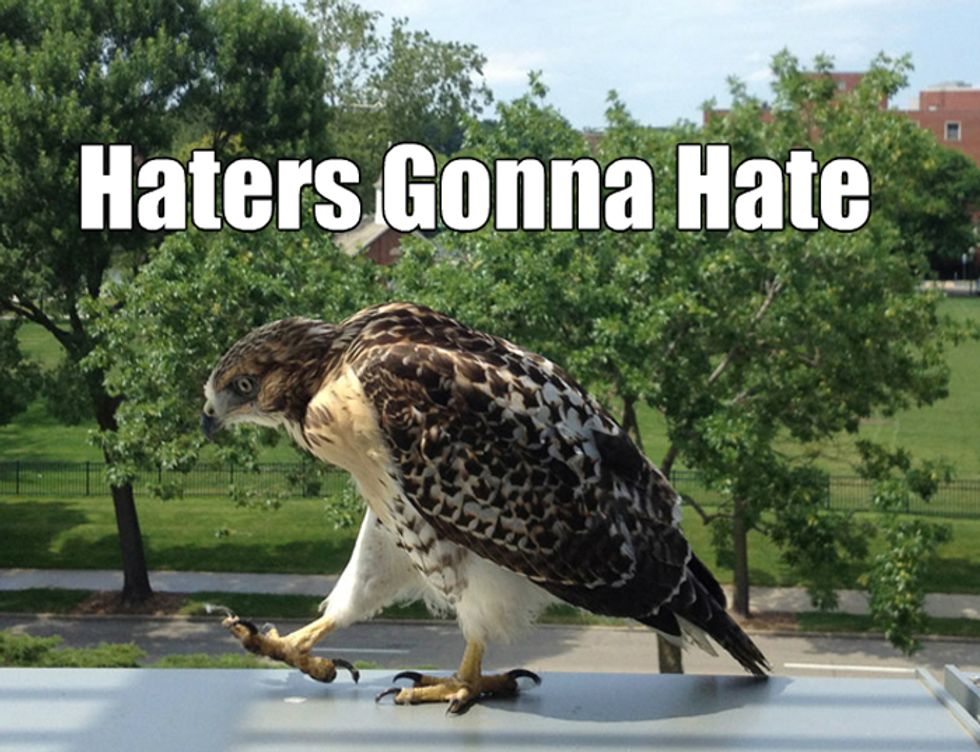 In yet another instance of state lawmakers taking a perfectly nice idea proposed by some civic-minded kids and teaching them a wholly dispiriting lesson about how government really works, several members of the New Hampshire House went out of their way last Thursday to be personally dickish to a group of fourth graders who had written to their state representative to propose a bill. The kids had proposed that the red-tailed hawk be named the official State Raptor, and the bill initially made it through the Environment and Agriculture committee. But when the kids and their teacher, James Cutting, took a field trip Lincoln Akerman School in Hampton Falls to see their bill pass in the full House, they got a civics lesson they hadn't expected.

Not only was the bill defeated by a 133-160 vote in the full House, a couple of lawmakers went out of their way to ridicule the bill and the stupid kids who had the temerity to waste the state legislature's time on it. Rep. John Burt, a Republican from Goffstown, taught the children a valuable lesson about small government:

"Bottom line, if we keep bringing more of these bills, and bills, and bills forward that really I think we shouldn't have in front of us, we'll be picking a state hot dog next."

Dumb children. Don't they understand that good government is about repealing laws, not passing them?

On the other hand, Rep. Burt was a tender sweetheart compared to Rep. Warren Groen (Guess which party!), who somehow managed to suggest that the fourth graders were a mob of potential abortionists:

"It grasps them with its talons then uses its razor sharp beak to basically tear it apart limb by limb, and I guess the shame about making this a state bird is it would serve as a much better mascot for Planned Parenthood."

Presumably, Rep. Groen then distributed gory photos of aborted fetuses to the kids to help them remember their trip to the state house.

Kids trying to learn about participation in the democratic process have had a mixed set of experiences lately. There was South Carolina nerdgirl Olivia McConnell, who eventually triumphed in her campaign to get the Wooly Mammoth named the state fossil, but only after intense opposition from a creationist in the state Senate who wanted to add creationist language to the bill, emphasizing that the Earth is only 6000 years old and mammoths died off in the Flood. And then there was the Vermont eighth grader who suggested the state adopt an official Latin motto, only to ignite a stupid Facebook debate about how if Latins want a motto, they can damn well go back to Mexico.

Happily, we have some good news on the kids-getting-involved front: After several setbacks, an Idaho 14-year-old has convinced the state House to revive a bill that would name the Idaho giant salamander the state amphibian. Ilah Hickman has been trying for five years to get the bill passed, but she ran into constant opposition from idiot lawmakers who kept killing the proposal. You see, they worried that officially honoring the giant salamander -- which lives only in Idaho and can grow to more than a foot long -- might give Washington an excuse to declare it an endangered species and then stop the destruction of the stupid animal's useless habitat, which really needs to be logged, mined, and/or turned into tract homes for Freedom.

The House State Affairs Committee was pretty much shamed into reconsidering Ilah's bill by Republican chair Tom Loertscher, who supports the girl's proposal, and said that if the Legislature was willing to recognize National Diaper Week -- which it actually did -- then it darn well should give consideration to a symbolic recognition of a cool little salamander that a diligent girl has spend five years advocating.

We'll let you know how the vote goes in the full House. We're betting the bill will only pass if giant salamanders are allowed to open carry firearms.