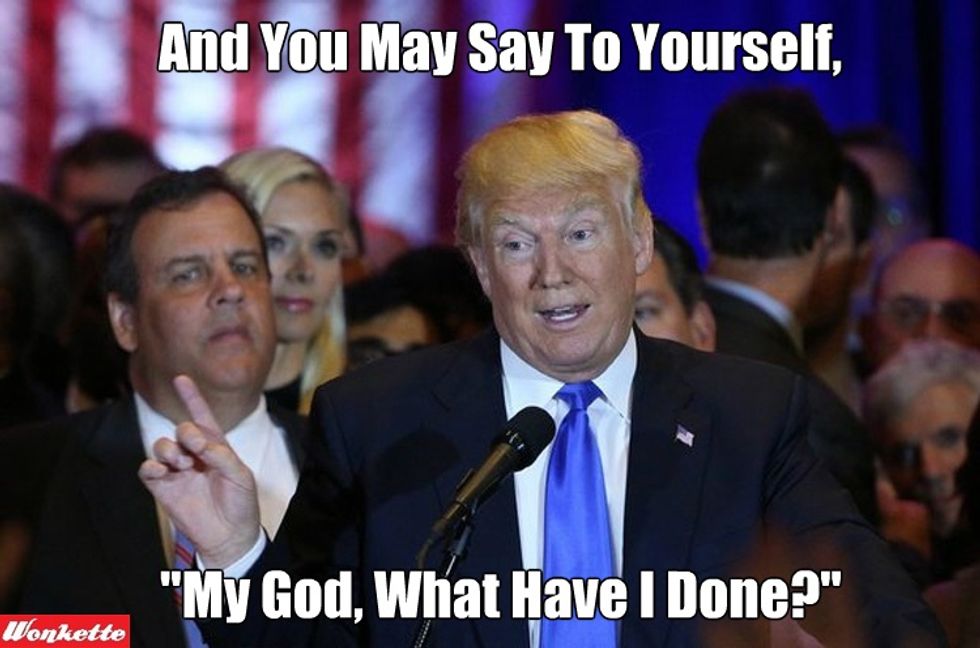 A Monmouth University Poll released Monday finds little love in the Garden State for Chris Christie: his job rating's at an all-time low and most residents think the state is worse off under his leadership. And no, they're not just saying that because they wish he'd stay and be their governor forever.

Currently, just 27% of New Jersey adults approve of the job Christie is doing as governor while 63% disapprove. Among registered voters specifically, his rating is 26% approve and 65% disapprove. These ratings reflect a record low for the governor. Moreover, for the first time in Christie’s six-plus years in office, the state legislature actually enjoys a relatively better rating -- 30% approve and 49% disapprove among all residents; 29% approve and 53% disapprove among voters.

Patrick Murray, director of the Monmouth Polling Institute, said, "It’s really saying something when the legislature, which rarely manages to get its rating above water, is seen as more effective than the governor." He then presumably suppressed a giggle and accepted a booking for tonight's Rachel Maddow Show.

Republicans just barely give Christie a positive rating, with 51 percent approving of the job he's doing. That wasn't enough to offset "dismal ratings" from independents and Democrats (23% approval and 17% approval, respectively). And twice as many respondents said the state is doing worse with Christie as governor (41%) than say the state is in better shape (21%). At least half of loud rude shouty guys named Christopher still like him, though.

Especially weird: New Jerseyites say Christie cares more about his political future than governing! Have you ever heard anything so nuts?

Nearly 8-in-10 Garden State residents (79%) say Christie is more concerned with his own political future than he is with governing the state (13%) -- marking the highest level of public skepticism about Christie’s public service commitment in more than four years of asking this question. In fact, the vast majority of New Jerseyans (68%) say the main reason that Christie threw his presidential endorsement to “The Donald” shortly after ending his own presidential bid was his desire to get some type of appointment in the Trump administration.

The deuce you say!

On the other hand, New Jerseyites are pretty fond of the president and their two U.S. senators. Sexxy Barack Obama has a 56% approval rating, sexxy Cory Booker has 49% approval overall. Not-so-sexy Sen. Bob Menendez, currently under indictment for bribery (not sexing underaged hookers, THAT WAS FAKE!), nonetheless managed a 40% approval rating. Yes, the accused crook is more popular than the sad governor.

The poll didn't give people the option of saying whether they think Christie should go eat worms, although local bait shops noted a boost in sales of long thin slimy ones, big fat juicy ones and itsy-bitsy-fuzzy-wuzzy worms.