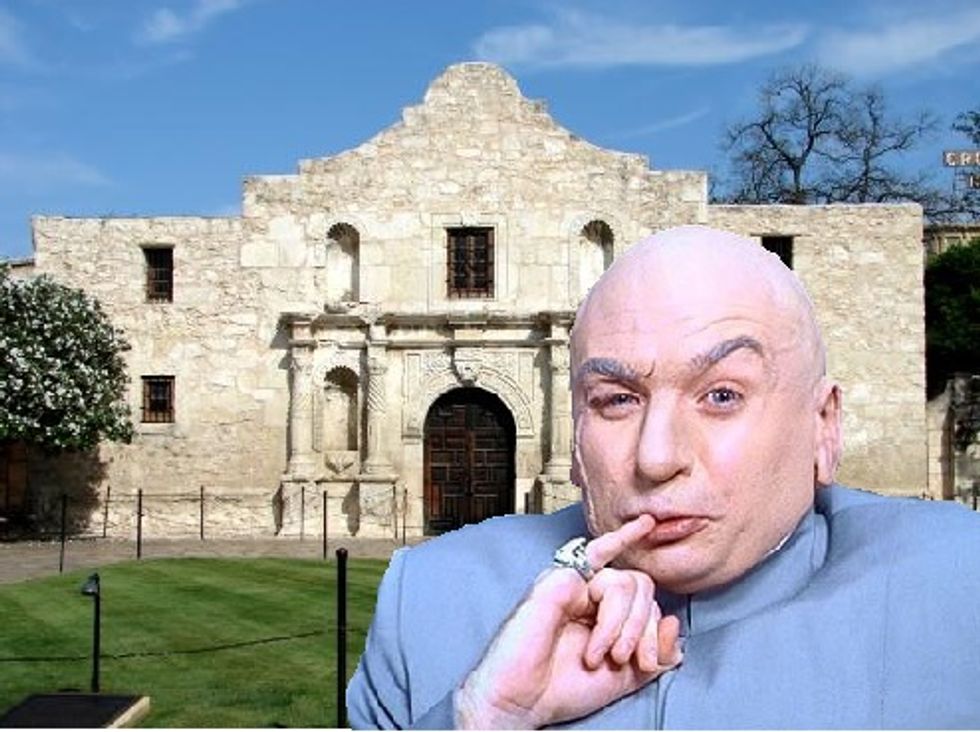 Here's your Conspiracy Theory du jour: the Wingnuttosphere is buzzing with warnings that the United Nations is on the verge oftaking over the Alamo, that sacred symbol of freedom and resistance to tyranny (especially Messicans and Obama) in San Antonio, Texas. From there, presumably, the UN will proceed to crush liberty, seize all the guns, and force every pickup owner to ride a pink bicycle while wearing a sissy little helmet with daisy stickers on it. Even worse, subversive elements within the city and federal governments are working behind the scenes to make it happen! You know it has to be a serious threat, because warnings about the coming takeover have been issued by the head of the San Antonio Tea Party and by Alex Jones' Infowars website. If you can't rely on them, who can you trust?

The reality is, as usual, a lot more boring: UNESCO is considering naming the Alamo and four other Spanish missions in San Antonio as World Heritage Sites, which would give the UN exactly the same amount of tyrannical control over the Alamo as it has over the other 21 World Heritage Sites in the USA, like the Grand Canyon, Yellowstone, Mount Rushmore, Independence Hall, Monticello, and the Statue of Liberty. Which is to say there'll be a plaque and an official statement that it's a very nice, historically important place that is now on a list of places that should not have bombs dropped on them, please.

Texas Land Commissioner Jerry Patterson described the rumors succinctly: "Horse hockey." That may help calm some heads, considering that Patterson is one of the candidates for Lieutenant Governor who are all trying to out-teabag the others. Patterson, you'll recall, is the guy who joked that instead of seceding, Texas and other Real American states should just expel the liberal states. Then again, maybe his insufficient vigilance toward the UN makes him a RINO.

The rumors drag in every possible bit of evidence of possible treason. The World Heritage designation is supported by San Antonio Mayor Julián Castro, a notorious liberal who spoke to a national gathering of commies -- and who has no actual administrative authority over the Alamo, but knows a good deal for tourism when he sees it. Even worse, it's also supported by the National Parks Service, the very same group of jackbooted thug stormtroopers who closed DC monuments during the government shutdown and machine-gunned crowds of WWII veterans on the National Mall.

George Rodriguez, the head of the San Antonio Tea Party, kicked off the speculation with a September email with the scary heading “The New Battle of the Alamo,” in which he warned that the Alamo “may fall under U.N. influence.” Jones's Infowars upped the ante Tuesday with a piece titled "United Nations To Take Over The Alamo," which envisioned this terrifying image: "a blue UN flag may fly above the historic shrine of liberty once it falls under UN control." You know, exactly like the UN flag at Independence Hall. You can only see it if you buy special goggles from a secret website, we hear.

The Infowars piece warns that a set of fairly anodyne guidelines for good practices at World Heritage Sites is actually a cover for a coming invasion:

The manual states that it is “the duty of the international community as a whole to cooperate” in managing World Heritage Sites, meaning that bureaucrats from China or France could oversee and influence the Alamo’s operation.

One of the “protection obligations” of a World Heritage Site is the requirement to “use the World Heritage logo,” meaning that the Alamo Plaza would be adorned with UN symbols.

And then, you just know what's next: Tyrannical Agenda 21 socialist bike paths. Wake up, sheeple!