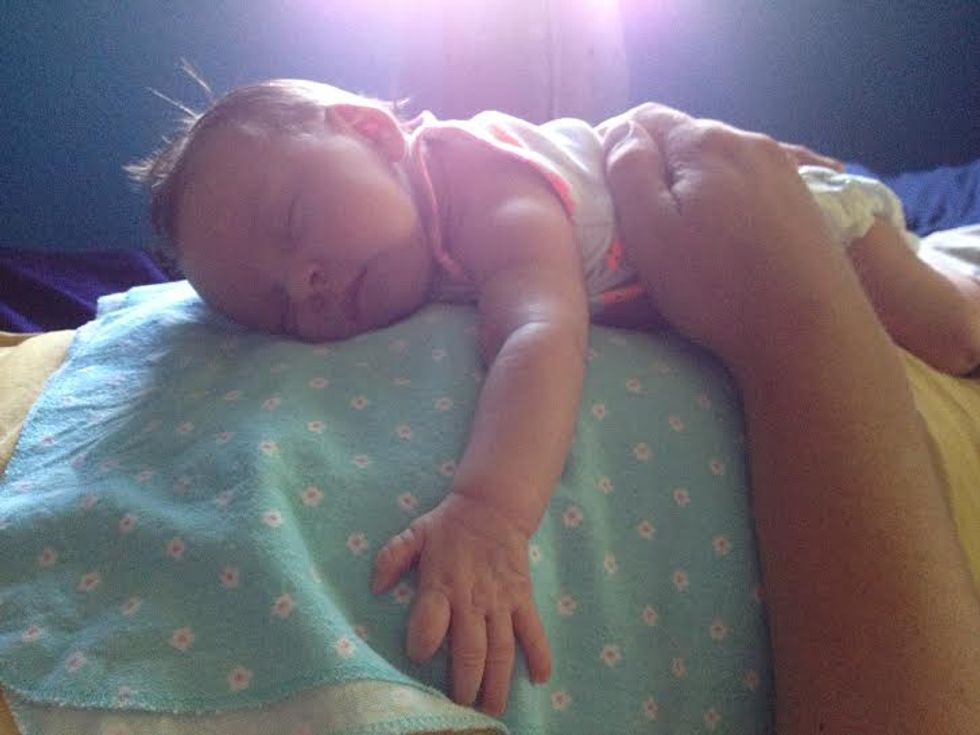 This came OUT OF MY STOMACHWhere is harpy/constant rag/culture scold Andrea Peyser when we need her? Has she forsaken and abandoned the New York Post? Certainly, under her gimlet eye the Post could never run what at first glance appears to be a Salon column, except instead ofwhining soulfully for the FBI to prosecute Hillary Clinton for having emails at her house*, it whines soulfully for all women to get maternity leave, even if they are not pregnant or adopting!

When a woman loves her husband very much and lets him fuck a baby into her, it does Bad Stuff to her body, and puts hormones on her, and she can get very stupid from not being able to remember things. Maternity leave lets her take care of her baby and feed it food (sometimes from HER BOOBS!!!) and also lets her recover from the terrible things the baby did to her stomach and her esophagus and her butt and her stomach some more, especially if she had a C-section because NOBODY TELLS YOU C-SECTIONS ARE PAINFUL AS FUCK FOR MOnthS AND THEY STOP GIVING YOU PAIN PILLS AFTER LIKE A WEEK BECAUSE THEY thINK YOU ARE A DRUG ADDICT.

Some people's new babies are very stupid and wake up all night every night and the woman might be exhausted (I mean very tired), especially if her husband is not a perfect husband who does all the baby care and housework and stuff.

Even so, even with the pain and exhaustion and stupid brain (but truly glorious hair), about a quarter of women in the US go back to work 10 days after they have a baby.

The Family Medical Leave Act is a law. It was signed by Bill Clinton, a president. It lets (some) women and men take up to 12 weeks off after they have a baby. During this time, they do not even get paid! In other countries, both the daddy and the mommy get paid! But in the US, they do not. Here is a picture of how that feels: :(

New York Post, maybe it is just your writer Anna Davies who made Meternity author Meghann Foye sound stupid, by transcribing her "as told to" thusly:

I was 31 years old in 2009, and I loved my career. As an editor at a popular magazine, I got to work on big stories, attend cool events, and meet famous celebs all the time.

And yet, after 10 years of working in a job where I was always on deadline, I couldn’t help but feel envious when parents on staff left the office at 6 p.m. to tend to their children, while it was assumed co-workers without kids would stay behind to pick up the slack.

“You know, I need a maternity leave!” I told one of my pregnant friends. She laughed, and we spent the afternoon plotting my escape from my 10-hour days, fake baby bump and all.

A) If your pregnant friend did not stab you in the eye, she was lying. B) leaving the office at 6 p.m. means your lucky-ducky coworkers were probably working 10-hour days too. C) I work 10 hours a day ON MATERNITY LEAVE, SHUT THE FUCK UP MEGHANN FOYE. Okay, to be fair: for the first six months of my maternity leave, which will end when our Donna Rose is 18, I only worked like six to eight hours a day. YOU WORK IN MAGAZINES, HALF YOUR DAY IS SPENT AT LUNCH ANYWAY EXCEPT FOR LIKE THREE DAYS A MONTH, YOU FUCKING WHINER.

As for me, I did eventually give notice at my job and take a “meternity” of my own. I may not have been changing diapers, but I grappled with self-doubt for the year and a half that I spent away from the corporate world. And I grieved the loss of my dad, who had just died after a long illness. But a “meternity” done right should be challenging. It should be about digging into your whole life and emerging from it more confident in who you are.

It also gave me the opportunity to help someone achieve their “meternity” dreams — even if that person was a fictional character. My first novel, “Meternity,” was just released, and is about a woman who fakes a pregnancy and discovers some hard truths about what it’s really like to “have it all.”

D) Sorry about your dad. E) Being on actual maternity leave doesn't mean "dicking around and writing a novel," and F) "have it all"? Sorry, I just murdered you with a poisonous untraceable South American tree frog.

Ultimately, what I learned from my own “meternity” leave is that any pressure I felt to stay late at the office wasn’t coming from the parents on staff. It was coming from myself. Coming back to a new position, I realized I didn’t need an “excuse” to leave on time. And that’s what I would love the take-away for my book to be: Work-life balance is tough for everyone, and it happens most when parents and nonparents support and don’t judge each other.

G) "I am a dick who doesn't understand stuff good and am shitting on my own thesis. Please judge me." H) Okay.

*Is it just that I am a bought and paid for neoliberal shill, or am I correct in assuming that State Department computer systems aren't actually all fly like in the movies -- ENHANCE! -- and that centimillionaire Clinton's home server was likely more technologically advanced and secure than whatever outdated shitpile they're using at State? IT professionals, retired spies, and very angry Salon columnists welcome to speculate in the comments!