'New York' Story On Lara Logan Has Too Much Sex, Not Enough Warmongering 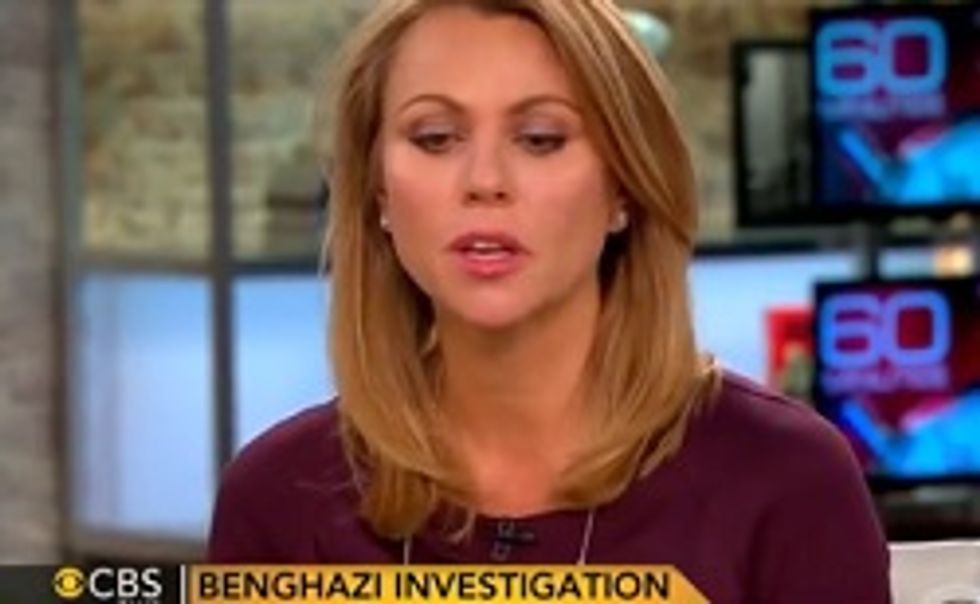 Late Sunday night,New York published a story that will likely get some people very shouty today. It concerns hamster-faced Lara Logan, the neocon CBS News reporter, and how she pooped her bed quite thoroughly last fall with her report about Dylan Davies, a security contractor for the U.S. consulate in Benghazi, who claimed falsely to have disobeyed his superiors and rushed to the consulate the night of the attack on September 11, 2012. Logan and her producers at 60 Minutes, which first aired her story, could have confirmed Davies was bullshitting them with one phone call to the FBI, but they didn’t, leaving it to other journalism outlets to debunk, which led to Logan’s mealy-mouthed on-air apology and indefinite suspension from CBS.

The New Yorkstory would be much better if it focused more on how Logan allowed herself to be misled by Davies and (this is the part that will bring on the shoutiness) less on her life as a reporter, reveling in tales of all the men she slept with and all the enemies she made, complete with gleeful anonymous quotes slagging on her for playing up her sex appeal to further her career, which people can do now that she has fallen and is unlikely to return to her former prominence, at least at CBS. (Roger Ailes, it almost goes without saying, is likely reading the story and salivating like a shark happening across a bunch of orphaned baby seals.)

Because the parts of the story about how Logan turned into a war-machine-glorifying hack are totally fascinating, and point up an issue about journalistic ethics (if that is not a contradiction in terms) and the ways in which a correspondent can become so wrapped up in a point of view she can lose perspective, and the importance of having strong editors who can pull someone back from that brink.

But screw that, let’s talk about her tits and her affairs and post a twenty-year-old shot of her in a bikini, back when she was still a brunette, because that is important.

Our favorite part of the whole thing is how Logan went to Sen. Lindsay Graham for background on the story and he told her “it was ‘a fair thing to say’ that there was a ‘build-up of Al Qaeda types’ in the area” -- mostly because that is the type of mealy-mouthed bullshit that has plagued the Benghazi story almost from the minute it happened. What exactly is an Al Qaeda type? If you mean Muslim extremists, that’s one thing, but it has never been clear that the attackers in Benghazi were actually affiliated with Al Qaeda, or simply Libyan Muslims attacking the consulate of a nation they saw as something of an occupier. Lindsay Graham was just spinning Lara Logan as hard as Dylan Davies was, to serve his agenda of attacking the Obama Administration’s actions, something Graham has been doing since the attack took place (He was doing it again on CBS’s Face the Nation just yesterday.) Nope, no agenda from a source there!

Good Lord, yr Wonkette could have vetted this story better than Lara Logan did. In fact, we did manage to write about it while hitting salient points and without implying that Lara Logan is a man-eating slut, because we're classy like that.

By all means read the New York story while keeping in mind the wingnut shrieking last week over how CBS was not covering the big BENGHAAAAZI!!11!! scoopy-scoop last week concerning the discovery of an email from White House lickspittle Ben Rhodes. The wingnuts are convinced CBS ignored it because the president of CBS News is David Rhodes, brother of Ben, so of course he’ll cover for the administration, INPEACH!! This requires the nuts to ignore the fact that a) before CBS, David Rhodes spent the first decade of his career at Fox News, which makes him much more of a de facto ass-coverer for the Bush Administration, and b) the possibility that CBS is much more cautious about reporting big Benghazi stories after having been so thoroughly pantsed by a money-grubbing security contractor with a book to sell and a war-mongering senator with an ax to grind.

Wait, what are we saying? Accuracy is the last thing the wingnuts care about.