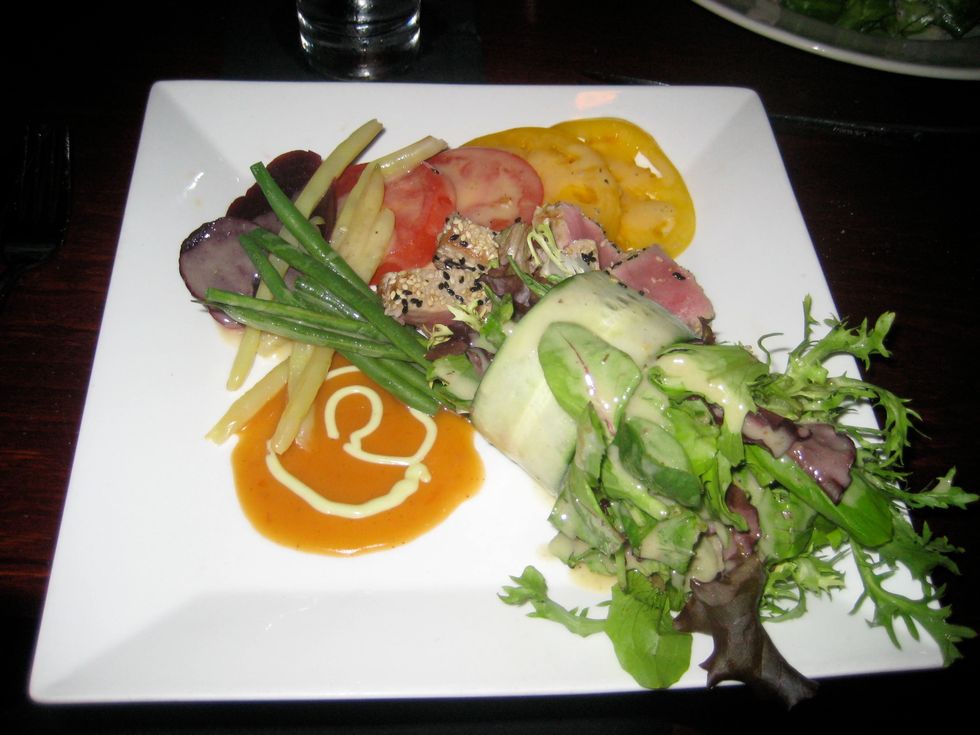 Oh, New York Times, you never fail to amaze us with your serious investigative journamalism into the strange and mysterious creature that is Woman. How often does Hillary Clinton sleep with her husband? How is being a successful career lady stopping you from finding a barely decent man to marry your sad single ass? How should you communicate with your children's nanny?

But oh, our newspaper of record, you have really outdone yourself with this earth-shattering story that will change history forever:

A salad may seem modest, but that dish (and its cult following among trend-attuned New Yorkers like Ms. Bhojwani) is emblematic of a shift in the way that women participate in the crucial information-gathering and idea-generating ritual known as lunch.

Stop the presses! There is a newfangled thingymabob called "A Salad" and women eat it! At lunch! With other women!

But wait! That's not all. Women eat other things too:

“They all save room for a little dessert,” he said. “They all tell you they don’t want any.” But they order it, they eat it, and “then they come yell at me.”

Oh, SNAP! Those fickle broads like to eat salad and dessert! Heavens!

Of course, the Times, being our official newspaper of record adhering to the Who, What, Where, When and Why requisites of Journalism 101, offers much more serious reporting than merely what kinds of salads women eat.

Don’t make the mistake of referring to these midday regulars as a new breed of “the ladies who lunch,” an echo of the Babe Paleys and Pat Buckleys, expertly coifed and even more expertly married to rich men, who once commanded hangouts like Le Cirque and La Côte Basque. For most of the current habitués of ABC Kitchen and Buvette, the Smile and Café Cluny, Rosemary’s and Lafayette, lunch has nothing to do with lingering for hours among the leisure class, comparing Bill Blass suits and sharing gossip with the catty likes of Truman Capote.

These are women who work, and the places where they choose to network and hammer out deals are a conscious reflection of their professional strategy.

See, this "new breed" of lunch ladies doesn't just eat salad (and dessert!); they also talk about business and stuff like they're men or something. Which is awful silly of them, of course, because that's no way to catch a husband, as the Style section of the Times so often warns us. But let's ignore that for now and get back to listing a whole bunch of fashionable restaurants and also tossing in some obnoxious literary references.

Fortunately, for those of us who are unclear on what a "business lunch" is because we just eat cold leftovers over our keyboards while sitting around in our sweats, the Times explains that it "naturally tends to happen where the business is." Thanks, the Times, that's very helpful!

Of course, this article is really about fabulous new places to find "roasted carrot and avocado salad ... with its beguiling layers of spices, sprinkled seeds and crème fraîche." But the Times is apparently behind on its quota of Stories About Chicks And The Stuff They DoTM, and could not be bothered to regale us with the latest squabble in the Mommy Wars, so it offers this refreshing angle reviewing the "female power-lunch scene" and "a sisterhood of restaurants scattered in and around Greenwich Village and TriBeCa, NoHo and SoHo." Oooh, sisterhood. Because women. Clever, the Times, so clever! No wonder Aaron Sorkin only reads real newspapers like the Times. You certainly can't find that kind of fact-based thoughtful reporting in the blogosphere.

We sure hope this is just the first in a series. Next up: lady breakfasts -- how the fuck do they work? The Times will most certainly be on it.