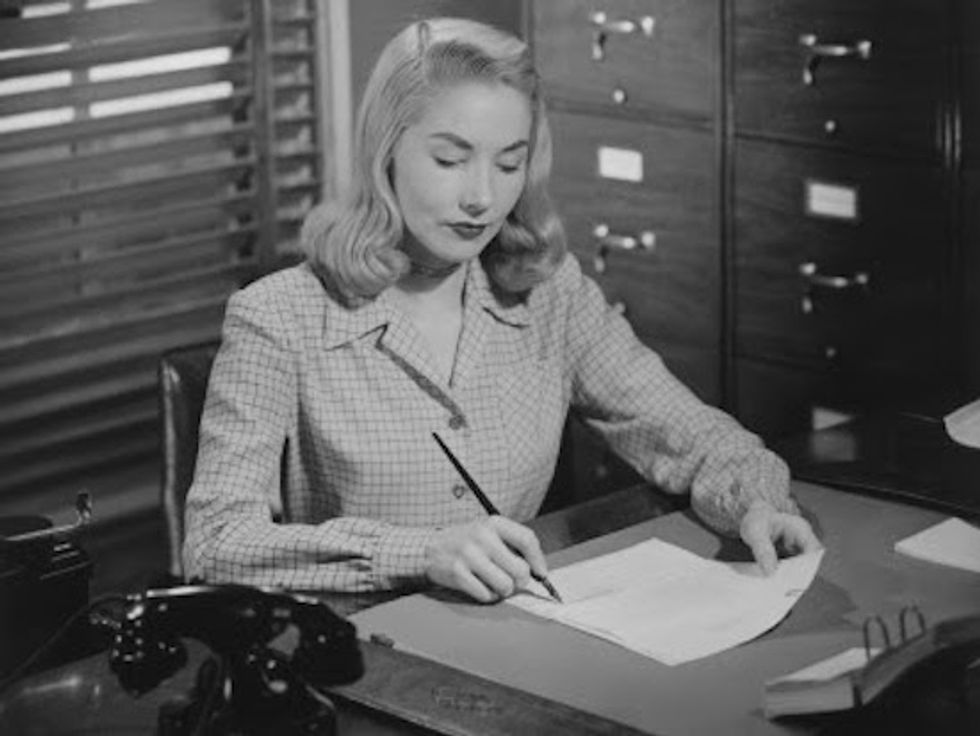 Our esteemed newspaper of record told a riveting EXCLUSIVE! MUST CREDIT NEW YORK TIMES! tale last week about a criminal inquiry into Hillary Clinton's mishandling of classified information with her personal email. And except for how it wasn't about Clinton mishandling classified information, and the information wasn't classified at the time, and the inquiry wasn't criminal, it was all true! Which is why the Times quietly changed its story overnight to be slightly less inaccurate in its telling of this WHOA IF TRUE! story of Clinton criming while Clinton. And then it changed the story again. And then it published a "correction" about how the original headline and story were not exactly right, but it's all good now, Pulitzers please!

Some people, like Yr Wonkette, said, "Hey, that is bad journalism!" And Margaret Sullivan, public editor at the Times, agreed. She wrote about the "journalistic problems" of the reporters trying to be FIRST! with their big scoop that turned out to be flat-out wrong, and then the paper trying to kinda sorta fix it on the down low, without clearly explaining to its readers that the article was flat-out wrong. Oops!

Losing the story to another news outlet would have been a far, far better outcome than publishing an unfair story and damaging The Times’s reputation for accuracy.

Yes, we certainly would not want to see the Times's reputation damaged for reporting a completely not true story. You know, again.

So finally, finally, the editors have decided to speak on the issue, with an "Editors' Note" that should hopefully clear everything up so we can forget about this bit of unpleasantness and move on to breathlessly awaiting the next oops! on Hillary Clinton:

The Times’s coverage last week of Hillary Rodham Clinton’s use of a personal email account as secretary of state involved several corrections and changes that may have left readers with a confused picture.

"Confused" is one word for it. "Totally misinformed because the article was wrong" would be another way of putting it, but that's so wordy.

After consultation between editors and reporters, the first paragraph was edited to say the investigation was requested “into whether sensitive government information was mishandled,” rather than into whether Mrs. Clinton herself mishandled information. That type of substantive change should have been noted immediately for readers; instead, a correction was not appended to the article until hours later.

On the one hand, good for the Times for realizing that "Clinton might be criminally investigated" is substantively different from "Someone who is not Clinton might be criminally investigated." On the other hand, though, it took the Times days, not hours, to keep correcting its story, as Sullivan noted, and also, isn't the Times supposed to have editors on the payroll to make sure such an explosive accusation is, like, accurate? Hahahaha, who are we kidding, it's the Times! Those editors are too busy looking for the latest trend in successful single women letting their ovaries rot instead of finding a decent enough man to settle down with, like they should. Or addressing Ted Cruz's hurt feelings about his "book" not being on the New York Times bestseller list. (Not to worry, it fixed that problem quickly.)

The editors also address the whole "criminal" versus "not criminal" confusion:

It was not clear how the discrepancy arose.

Good to know they figured that out so it will never happen again. Did the Times do anything else to clean up its mess?

On Friday afternoon, The Times wrote a new article, including the inspectors’ finding and the change in the description of the referral, as well as Mrs. Clinton’s response that she was confident her emails did not contain classified information. The original article, however, was not altered online until Saturday morning to take account of the change in description of the referral from “criminal” to “security.” Editors should have added a correction sooner to note that change.

So, in other words: The Times wrote a bogus story, made some tweaks, later added a correction, then tweaked some more, tweaked its correction, and finally realized the entire story was a pile of garbage, so it wrote a fresh new one, but didn't bother noting that the original story was a pile of garbage until days later. But at least the editors are very sorry about this colossal fuck-up:

Oh, nope, they're not. That was the end of the "note." Oh well. Next time they GOTCHA! Hillary Clinton for jeopardizing national security by criminally emailing classified documents, they'll be sure to get it right.