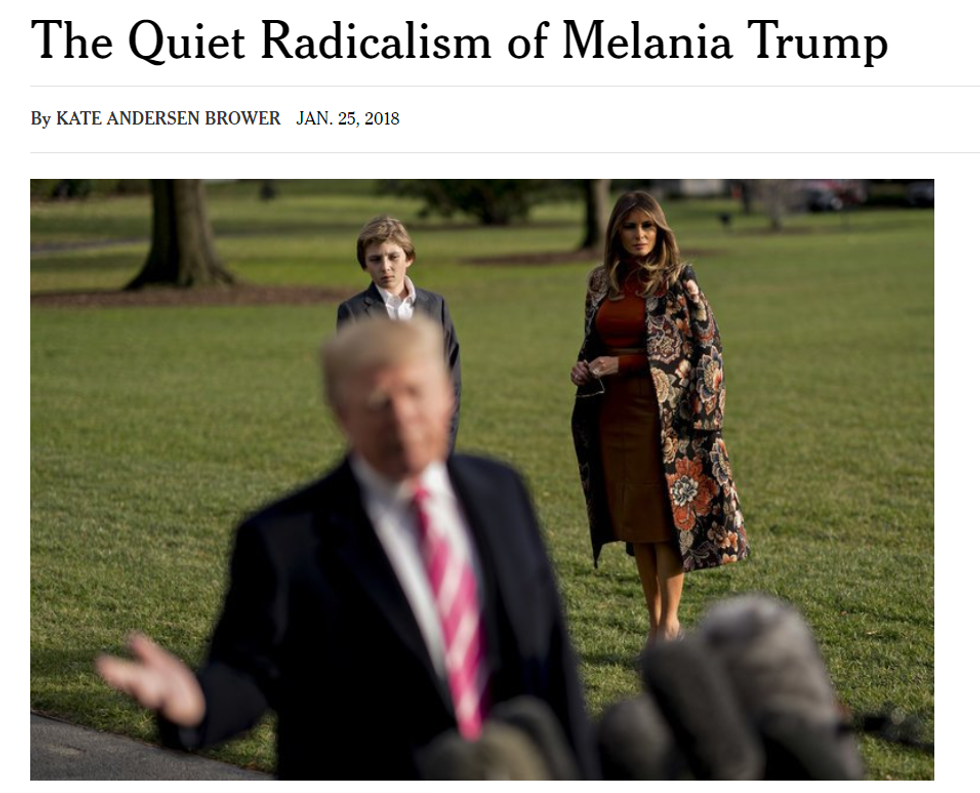 What in the hell is going on at the New York Fucking Times? (Evergreen question, we know!) Sure, NYT has some good reporters and gets good scoops sometimes, but apparently, confronting a world where each and every day the Washington Post just cold fucking DUNKS ON the so-called "paper of record," NYT has decided its journalistic philosophy will be "If you can't beat WaPo, suck Donald Trump's ass a bunch."

Both of those headlines tell the same story. Only one of them does it while sniffing the president's beef poots and telling him they smell like flowers.

Sure, NYT breaks stories. Maggie Haberman and Michael Schmidt GETTED ONE Thursday night, with news Trump tried to fire Robert Mueller last year. But when it was brought to Haberman's attention that she had only gotten this scoop MANY MONTHS after it happened, she responded that aw shucks, the Trump White House just does a really good job at lying. Blue ribbon lying! First prize lying! Definitely no participation trophies for lying in this White House! What an honor it is to receive these lies!

Now compare that to Haberman's righteous indignation when she found out the Democratic lawyer who commissioned Fusion GPS to look into Trump's Russia connections had not been willing to worship at the high altar of Maggie Haberman, delivering unto her the scoops she deserves at all times:

There are myriad examples of this egregious kiss-ass-ery. Remember last year when harass-y reporter Glenn Thrush gave Trump a free blowy because he VERY PRESIDENTIALLY was going to visit the Hurricane Harvey disaster area and THIS MEANS HE IS PRESIDENT NOW? To be clear, Donald Trump hadn't even waddled on to Air Force One yet, and it would be hours before Melania Trump braved the flood waters of south Texas in her stiletto galoshes.

NYT has a #HotTake from a contributor and Noted First Lady Expert named Kate Andersen Brower, about how Melania Trump is a revolutionary first lady because ... she fucking hates her husband and ain't dealing with his shit? This is how low the bar is set. And NYT thought it was a good idea to publish it.

Did you know Melania Trump is a QUIET RADICAL?

Melania Trump ... commemorated [the anniversary of Trump's inauguration] by tweeting a single photo of herself on Inauguration Day on the arm of a Marine. Her husband was nowhere in sight, and she did not mention his name. A few days later — on what happened to be the Trumps’ 13th wedding anniversary — she canceled her plans to accompany Mr. Trump to the World Economic Forum in Davos, Switzerland.

She may not be progressive. She may not be political. And yet Mrs. Trump may end up doing more than any of her predecessors to upend our expectations of the slavish devotion a first lady must display toward her husband.

But no! says the New York Times. Melania Trump is revolutionizing what it means to be first lady! By ... slapping Donald's hand away in public, because for real, she hate him.

Brower allows that yes, the Trumps have a weird marriage, and yes, Donald's extracurricular activities over the course of their marriage, as well as his treatment of Melania -- "Mrs. Trump is the third wife of a man who once told the radio host Howard Stern he would 'give her a week' to lose the baby weight after their son,

Barron, was born" -- might factor into why she's so very long hair, don't care about all this.

But ... a QUIET RADICAL? Yes, says Brower! Because Lyndon Johnson was mean to Lady Bird but she "cheered him on" and would QUIET RADICAL Melania Trump ever do that? Poppycock!

Also too, Nancy Reagan genuinely loved her husband. Would QUIET RADICAL Melania Trump ever do that? Balderdash!

Moreover, Hillary Clinton -- yes because it always comes back to Hillary The She-Beast Whose Sins Are Countless -- became a TRAITOR TO ALL WOMEN, after Bill's blue dress jizzing was exposed, by working things out with her husband, a personal decision that had everything to with THEIR MARRIAGE and nothing to do with OUR BUSINESS. Would QUIET RADICAL Melania Trump have worked that out with Bill? Applesauce!

Though the mutual affection of the Obamas was obvious, Mrs. Obama was also the first first lady to challenge people to accept a woman who refused to play the role of the saccharine, adoring spouse. “I can’t do that,” she said in 2007 Vanity Fair interview. “That’s not me. I love my husband. I think he’s one of the most brilliant men I’ve ever met, and he knows that. But he’s not perfect, and I don’t want the world to want him to be perfect.”

Maybe this NYT article should have been about Michelle Obama, QUIET RADICAL, who did things her way even though she absolutely adores her husband. Maybe it should have been written in 2010! Just a thought.

But no, we're stickin' with Melon the QUIET RADICAL:

Her apparent antipathy toward the job has made her more willing to ignore the rules and traditions that govern it. This quiet rebellion started with her decision not to move into the White House until five months after her husband took office. It gathered force when she swatted her husband’s hand away on an airport tarmac in Israel last year.

BECAUSE. SHE. HATE. HIM.

Look, we know there are many rumors out there about the Trump marriage. That he's having an affair right now. (Our money's on Hope Hicks, Stephen Miller or ALL OF THEM KATIE.) That she was already planning to divorce his ass before, oh my god, he actually was barely "elected" president. That she's had side peen at Trump Tower in NYC for years, in the form of a front-peen-having security guard. Is any of that true? We dunno, but where there's that much smoke, there's probably a bunch of side peen, just like the ancient Biblical proverb says.

But we're having trouble figuring out the point of this piece, and why Brower concludes that Melania Trump, BECAUSE SHE HATE HER HUSBAND, is somehow going to transform First Lady-dom into something magically different, by virtue of SHE HATE HER HUSBAND.

Oh wait, we forgot. The New York Times has chosen to use this historical moment of crisis to kiss the Trumps' asses, and it was just Melania's turn we guess.