Newt Gingrich Is All Out Of Whore Diamonds 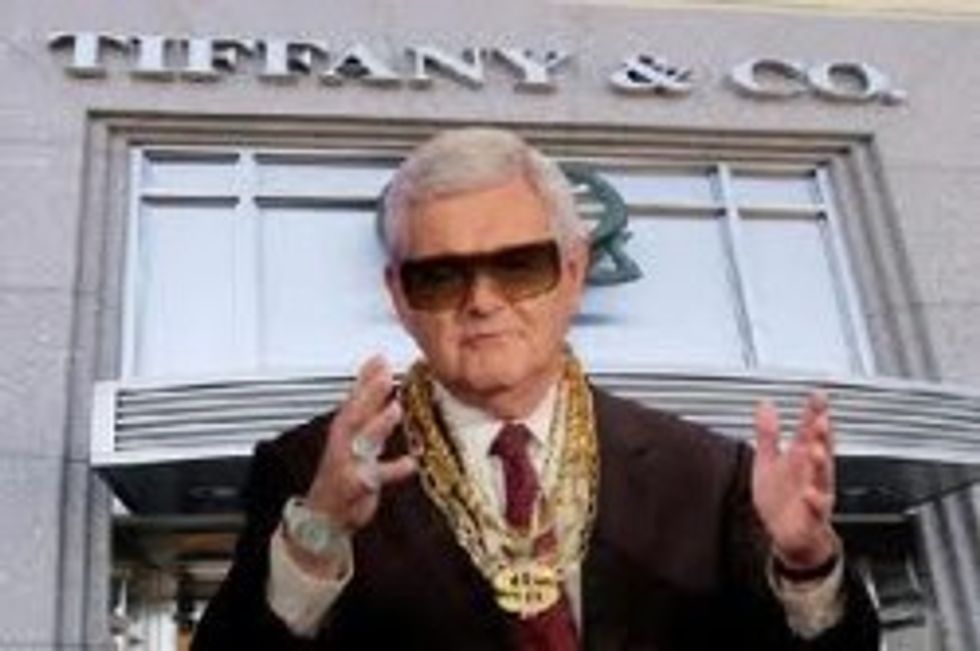 We have had a lot of fun over the years pointing and laughing at Ol' Yeller, Newt Gingrich. One of the things we have liked best islaughing about how very bad he is with money, because of how he is a common hustler who rips off everyone within a 26,000-mile radius. But today, Reuters points us to a tragic tale: not only is Newtypie's campaign 80 trillion dollars in debt or whatever, but his personal fortune -- his "empire" pulled in $110 million over the past decade -- welp, that's gone too and everyone is as bankrupt as Donald Trump. OH NOEZ!

The Gingrich Group bankruptcy proceedings spotlight the remarkable reversal of fortune of the half-dozen organizations associated with Gingrich. The presidential contender recently ended his campaign $4.8 million in debt. A political nonprofit he headed, American Solutions for Winning the Future, which raised $52 million between its founding in 2007 and its dissolution last July, also ended in debt.

That would buy so very many whore diamonds. Have these people no priorities? Let us read some more eye-goggling numbers please, Reuters, perhaps with a bonus aside about what a liar the entire right wing is about their stupid keening over NAZI SOSHULIST MANDATES!

Opened in 2003, the [Gingrich-founded Center for Health Transformation] pulled in $59 million over nine years from more than 300 companies, some of which paid as much as $200,000 in dues. Among its activities, the center and Gingrich helped push a mandate requiring everyone to carry health insurance. At the time, the position was beneficial to the center's healthcare industry members, but Gingrich later repudiated it as a candidate.

Desmond said revenues fell from just under $7 million in 2010 to $4 million in 2011 and then to less than $300,000 in the first quarter of this year. Some $1.2 million in dues that had been expected earlier this year never materialized because those members also decided not to renew. By March the center was no longer able to pay the rent on its suite of offices in Atlanta and Washington.

Republicans are so good at fiscal "conservatism," aren't they? (No they are not.) Anyway, everybody in the world is suing everybody else in the world, and Newt Gingrich is only one creditor among many suing this Health Whoozit because he sold it to them and now he wants to get paid back first and stuff, but they are not paying him and Callista back and so any second now they will be eating hobo beans, sadface!

Court documents list 64 creditors in the Center for Health Transformation bankruptcy, including the state of Missouri for income taxes ($894) and two Atlanta hotels - the St. Regis ($46,000) and Ritz Carlton ($8,500).

"We had quarterly member meetings … we tended to hold in very nice places," she explained.

Because Capitalism, of course!