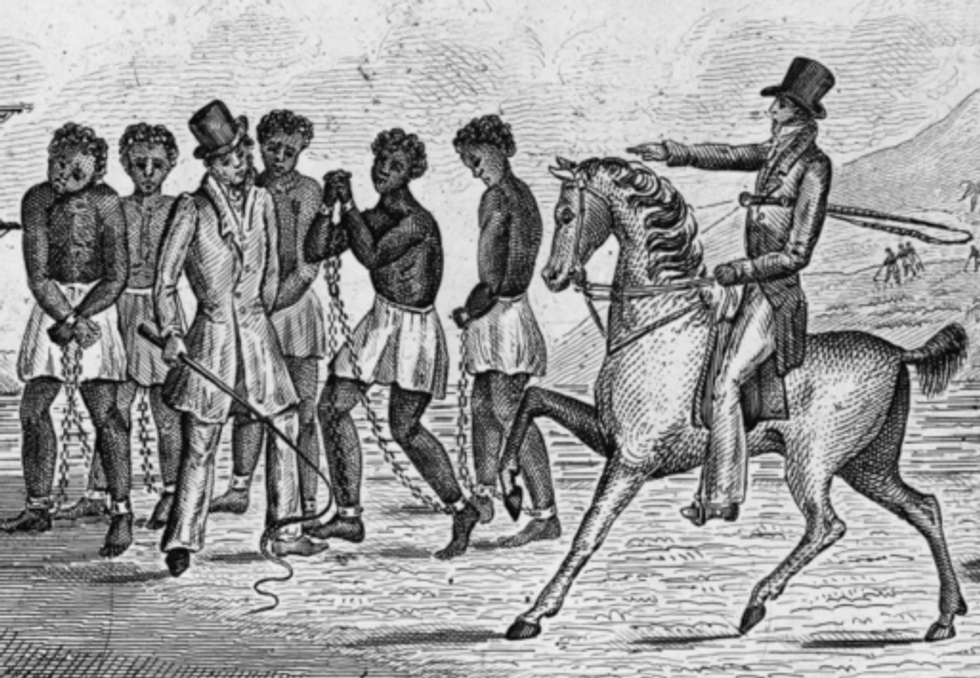 Where's my old book of negro spirituals at? We sho' gon' need it if we're going to be ready for the NFL Plantation. Fucking Roger Goodell has done enough shit already to make a fan spit tacks but this move is another exponential level and he has the monotone whispery gall to call it a compromise. Fuck all the way outta here with another scandal under your tenure, Goodell.

Yesterday, the NFL decided to approve fining teams whose players take a knee during the National Anthem as made famous by unemployed QB Colin Kaepernick. The compromise is that players can stay in the locker room while the anthem is played? Why, so they can kneel in there? So fucking stupid. Give me a gotdamn break already. The owner/overseers just don't want the spectacle affecting they cash mo-ney.

Million dolla Trump donor and Cowboys owner Jerry Skeletor Jones has been running his mandible about the kneeling protests since they began. Given Jones lost 2 million and a possible winning season last year supporting his star running back and domestic violence perp Ezekiel Elliot through game suspensions, Commissioner Goodell owes him. So Jones prefers his 6 foot, 225lb assaulter of women (that buck sure can run though!) vs. uppity Colin Kaepernick, peacefully protesting police violence before a game? Fucking insidious as hell, no?

Animatronic VP Mike Pence also weighed in on the racist decision that limits the freedom of expression of grown ass, mostly men of color (the NFL is 80 percent black). Curiously, the Thomas the Tank Engine-faced VP Pence didn't address how he was honoring the flag when he lied and staged a photo op last year at the height of the controversy. Kneeling, bad. Lying, okay. It. Does. Not. Compute.

Today’s decision by the @NFL is a win for the fans, a win for @POTUS, and a win for America. Americans can once again come together around what unites us – our flag, our military, and our National Anthem. Thank you NFL. #ProudToStandpic.twitter.com/zNwxhYGNaN

The NFL as plantation mentality is not a new dynamic. Massa NFL commissioners have fined black men for "excessive celebrations" after a touchdown by the implementation of "no showboating" fines in the '80s (Redskins Fun Bunch) to Randy Moss getting fined for pretending to moon Lambeau Field. Now, no skin was shown but those few seconds of figurative cheek cost him $10,000. Merely a swift motion miming that he was showing his black ass to the wypipo cheeseheads was too much an offense to tolerate. Yes, plantation. Now they want to infringe on these men's First Amendment rights.

As former NFL journeyman QB Sage Rosenfels clearly knows, the new no kneeling rule is not hardly about patriotism or respect or unity. It's about racism and control. Apt fucking name, Sage. Apt fucking name.

I hope the NFL decides to completely stop all concession stand sales during the anthem as well. We wouldn’t want people buying a $10 beer and an $8 hot dog during our sacred anthem.

All TV camera crews must stop filming and direct attention at the flag too.

Some owners have already stated they'd absorb any fines for players who choose to protest on the field. Jets co-owner and chairman Christopher Johnson said as much, and his brother and co-owner Woody Johnson stated he would not force the issue either, which might seem awkward since he's serving as Trump's ambassador to the UK. That's great Woodster, but these benevolent owner declarations shouldn't be necessary at all.

Jets co-owner Christopher Johnson says he will pay any fines his players might be subjected to as part of the NFL's new national anthem policy, per @BobGlauberhttps://t.co/gSMrWDRbHQpic.twitter.com/hTwLbba6eT

“Not speaking for the league, I don’t represent the league, but from my perspective I think I know a little bit about NFL players. From my perspective, they’re engaged in many, many positive things all across America, all the time, week in and week out. Some of it is protest and demonstrations, speech. Some of it is supporting the military in Iraq and Afghanistan, visiting over there. Some of it is working in communities with police, EMS, firefighters and celebrating that, as the Cleveland Browns players did a couple weeks ago.

I go to games in Baltimore where my grandkids live, and I know more about the players there who are in the community working with the homeless and domestic violence [victims]. For me to single out any particular group of players and call them SOBs, to me that’s insulting and disgraceful.

think the players deserve the credit, they should get credit for what they do. And when it comes to speech, they’re entitled to speak, we’re entitled to listen, we’re entitled to disagree or agree, for that matter. But we’re not entitled to shut anybody’s speech down. Sometimes you don’t like what you hear, well that’s true of life in lots of contexts, but you can’t shut people down and you can’t be disgraceful when you’re doing it."

For now it's too late. The NFL and Goodell are in bed with Trump -- the culturally sensitive fella that referred to any protesting player as a "son of a bitch." They so deep in bed, they are sharing a cigarette and looking for a kleenex. Given the NFL's plantation mentality, this tasteless hook-up is really no surprise.