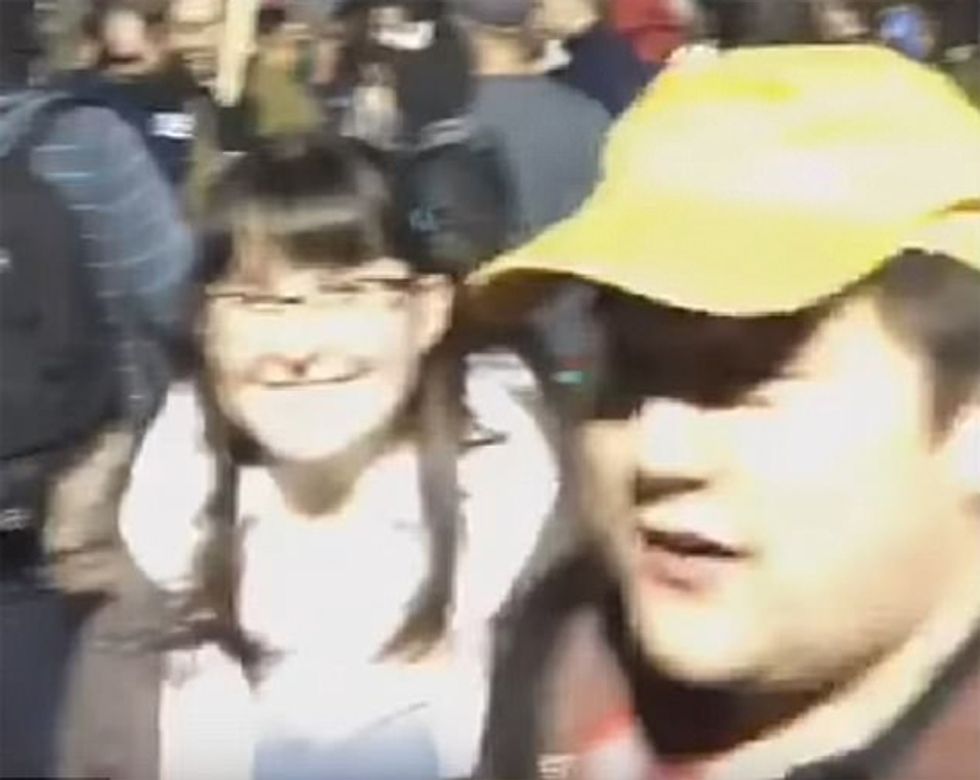 They're smiling. Must be good people.

How's this for romantic? Back on January 20, Marc and Elizabeth Hokoana, a couple of sweet young folks in Seattle who think Donald Trump is the bees' knees and the world's snowflakes, libtards, and commies need to learn a lesson, spent some quality time together by going to a Milo Yiannopoulos speech at the University of Washington. Oh, not to hear their favorite gay white nationalist provocateur talk; they didn't want that. They went to see if they could provoke a good fight with some liberal snowflakes, to prove the violence inherent in the system is all perpetrated by filthy leftists. Marc had a can of pepper spray, and Elizabeth had a Glock, and they were ready to rumble. By the end of the evening, Mark had sprayed several protesters in the face, and Elizabeth had shot Joshua Dukes, a 31-year old gent who'd been trying to break up a confrontation between Milo fans and protesters. Dukes suffered multiple internal injuries and spent several weeks in the hospital, but survived. After months of investigation, the Hokoanas were charged in King County Monday: First degree assault with a firearms enhancement for Elizabeth, and third-degree assault for Marc. The couple that assaults together ... well, you know the rest!

According to prosecutors, the Hokoanas planned to look for trouble -- or as their defense claims, they were ready to defend themselves from liberal thugs outside the lecture. A Facebook conversation cited in the charging document certainly suggests Marc was planning to beat on some snowflakes who fail to understand that Donald Trump is their president so they have to shut up forever now:

The charging documents say the Hokoanas went looking for trouble, that Marc did his very best to stir it up, and that Elizabeth was looking for a chance to shoot someone. During the protest, Marc messaged Milo Yiannopoulos to report a mean snowflake had snatched away his red "Make America Great Again" hat (which is theft and bad and we don't endorse that sort of thing); he asked Milo to send him a new one, but Milo never replied.

One witness cited in the charging document, "B.F.," told UW Police he'd seen Marc Hokoana -- who he believed was intoxicated -- repeatedly trying to provoke reactions from the protesters:

"B.F." also said he'd spoken with Hokoana earlier in the evening and told him to go home because he was drunk, and that "the man seemed to be there only to provoke the crowd." Another witness, "D.T." said Marc Hokoana had asked him and a friend to "stand in front of him so he could use mace against an individual or the crowd," but that he refused, after which he saw a woman who was with Hokoana stand in front of him while he sprayed mace from behind her.

Video submitted by the Southern Poverty Law Center shows Marc Hokoana repeatedly goading protesters, getting in their faces, and demanding they replace his stolen hat, which the crowd was collectively responsible for stealing (they're commies, after all, and the site on the UW campus is actually called Red Square).

At about the two-minute mark, Elizabeth Hokoana can be briefly be seen (on the left) while Marc talks to a Trump supporter who'd been hit with a blue paintball pellet; the detective says the way she reached with her right arm, behind her her jacket, "was consistent with a person who was attempting to pull a concealed pistol from a holster." Here's a still for those of you who want to shout "ENHANCE!" at your computers:

That possible reaching-for-a-gun moment was about a half hour before the shooting; maybe Ms. Hokoana was just scratching her itchy trigger finger.

There's not any really clear video of the actual shooting, though another video does catch the sound of the shot and the crowd reacting as police surround Dukes to help him. The Seattle Times has a video provided by the prosecutor's office which shows the moment of the shooting and identifies Dukes and the Hokoanas; we can't really see what's going on, but Dukes was reportedly confronting Marc Hokoana after Hokoana pepper-sprayed someone when Elizabeth Hokoana shot him. The Hokoanas turned themselves in about two hours after the shooting and claimed Elizabeth had shot Dukes in self-defense. That's not how the King County prosecutors see it:

“The degree of planning involved in this crime demonstrates the danger that these defendants present to the community,” wrote Senior Deputy Prosecutor Mary Barbosa [...]

The shooting, Barbosa noted, “was not an impulsive act done in a moment of fear.”

Evidence in the charging papers “demonstrates that the defendants went to the event at the UW campus with the intent to provoke altercations with protesters who they knew would be at this controversial event,” Barbosa wrote.

“The defendants created a situation designed to allow Elizabeth Hokoana to shoot the victim in the middle of an extremely crowded event under the guise of defending her or her husband,” she added.

Needless to say, the Hokoanas' attorneys issued a joint statement insisting everything that happened was in self-defense, OBVIOUSLY.

“We have provided the police and the prosecution evidence showing that our clients acted lawfully in defense of others,” the statement said. “The accuser, Joshua Dukes, has repeatedly stated that he does not want this to go through the criminal-justice system. We are disappointed that the prosecution has decided otherwise. We look forward to presenting our case to a jury and we anticipate an acquittal.”

Dukes, the big ol' IWW peacenik, has said through his attorney, Sarah Lippek, that his preference would be for a process of "restorative justice" that would be better for healing, not just for Dukes, but for his assailants:

“Being shot was devastating for Mr. Dukes, his family, and his community. The Hokoanas harmed many people by their violent actions,” Lippek wrote.

Dukes hopes the couple will take accountability for their actions, Lippek wrote, as well as taking weapons into “already unstable circumstances” and escalating the violence.

Restorative justice, Lippek explained, would allow for dialogue between the victim and those who've done harm, and would give the Hokoanas the chance to truly take responsibility in a way the criminal justic system, being purely punitive, would not.

Who Would Donald Trump Like To Punch In The Face Today?

Gotta appreciate the sentiments of the nice hippie and his lawyer, but we have a feeling the Hokoanas wouldn't be all that impressed by such snowflake methods of seeking justice. As Trump supporters, they surely want law and order, so we're certain they'll respect Elizabeth's possible ten-year sentence for assault. You just have to be tough with some of these people. In the old days, they'd be carried out on a stretcher, folks.

Yr Wonkette is supported by reader donations -- please click the "Donate" clicky below to help. Or maybe we'll have to pepper spray you.