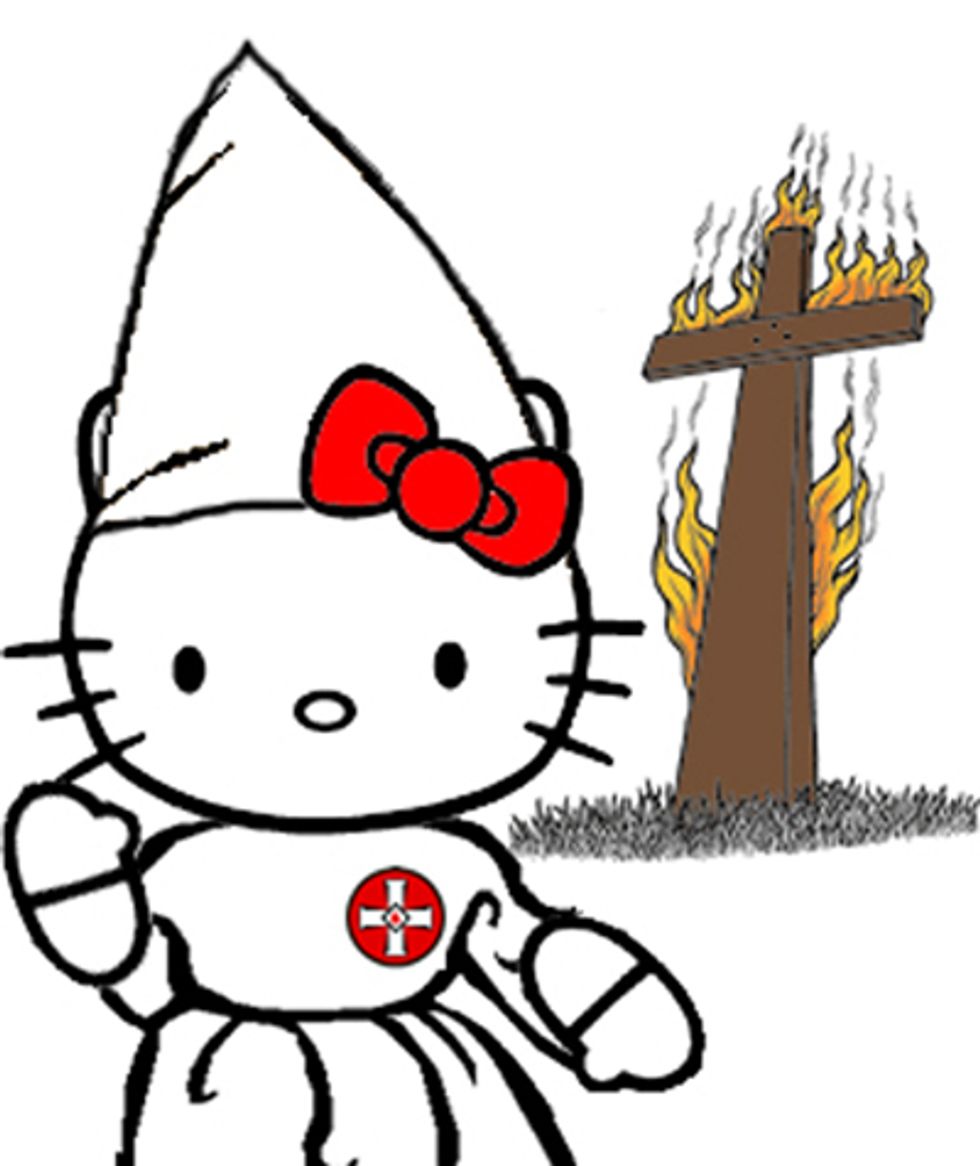 Oh dear, this illustration is unfair, because she says she's not racist.

Today's dose of Gosh How Shocking is brought to us by the Huffington Post, which profiles the adventures in far right politics of one Kristen Walker Hatten, a self-described "feminist" who is also against legal abortions. She was quite the big deal in anti-abortion circles, because how could opposing abortion rights be anti-feminist if this fine young feminist says feminism and lack of reproductive freedom are perfectly compatible, huh? Hatten is a former vice president of a group calling itself "New Wave Feminists," which -- so sad! -- wasn't allowed to partner with the Women's March on Washington, and wasn't THAT just terrible for the dozens of feminists against abortion? Hatten was also a contributor to the Dallas Morning News and to anti-abortion website Live Action News, the crowd that brought us the fake videos about Planned Parenthood selling fetus parts at the Babby Meat Swap Meet.

But now Kristen Hatten is alone and friendless after she went all far-right white nationalist after the 2016 election and regular rightwing anti-abortion folks couldn't accept her Richard Spencerish ass-hattin', says HuffPo:

Hatten wrote in late 2016 that she found Trump to be so “creepy, gross and tacky” and such a “repugnant chauvinist” during his campaign that she quit the internet for a while to avoid reading about him. But after he won, something changed. Hatten began sharing white supremacist content on social media. She self-identified on Twitter as alt-right and “ethnonationalist” ― the same term used by white nationalist icon Richard Spencer. She mused on Facebook that immigrant “invaders” are replacing white Europeans in their own countries, and shared a post imploring Trump to grant “asylum” to white South Africans.

And just check out her important social media content, which Owns The Libs:

But before you get the wrong idea, Hatten has this very novel explanation of why she is not a racist, which is precisely the same "I'm not a racist" claim made by every racist we've known since the Nazi UFO enthusiast we worked with at McDonalds in 1981. In an email to HuffPo, Hatten explained,

"I admit to being racist by today’s standards, but I also think almost everyone is racist by today’s standards,” she wrote. “Is it racist to live in a majority white neighborhood? Send your kids to majority white schools? When I was a kid ‘racism’ meant hatred for another race and/or acting on that hatred. Now you’re a racist if you touch a black person’s hair because you think it’s pretty."

We bet she also can't see why those people object to her handing their little kids a bright shiny penny and asking them to dance. But wait, this isn't about hating anyone! It's about love! Love for white people!

"I do see that Europe and the US are becoming... well, not European,” she wrote. “This concerns me not because I hate anyone, but for the same reason Japan would be concerned if the Japanese were becoming a minority in Japan. No people should be excited to become a minority in their homeland. It is contrary to human nature. I wouldn’t expect it of any race and I don’t think it should be expected of whites.”

Oh, we have never heard that one before! We bet if she tried, she could even reduce it to a nice brief fourteen words, too.

Incidentally, Lila Rose, the president of Live Action, said she's very sad about the ugly turn Hatten's views have taken, and also points out that the real racists are people who want abortion to be legal, because of course "Institutionalized racism has also contributed to the deaths of millions of minority children in the womb." Which is why Martin Luther King accepted a "Margaret Sanger Award" from Planned Parenthood that one time, because he was possessed by a pro-abortion three-headed sex dragon.

Anyway, now none of Hatten's old normal-rightwing friends want to hang with her anymore, she's been kicked out of New Wave Feminists, and HuffPo's Laura Bassett informs us that Hatten was forced to take serious measures to protect herself from Basset's reporting:

After I reached out to Hatten last week, she deleted her Facebook and Twitter accounts. She said she is having a high-risk pregnancy and that the negative attention to her views would cause her more stress. On Saturday, someone identifying himself as the moderator of an “alt-alt-right” Facebook group, Space Right // Meta Future, texted me to say that Hatten had used an alias account to post my phone number on the group’s page and complain that I was “doxxing” her.

Honestly, don't any of these rightwing dipshits know what words mean? (Answer: Of course they do! That's why they deliberately misuse them!)

Thank goodness Hatten's husband has at taken some steps to protect her from all us violent leftsts. He's in the military and deployed overseas, but he

“I might be in Africa now,” he wrote, “but I’ll come home soon enough and pull your fucking heart out of your broken rib cage and eat it.”

Yr Wonkette is supported by reader donations. Please click here to help us do our part in the cause of white genocide.