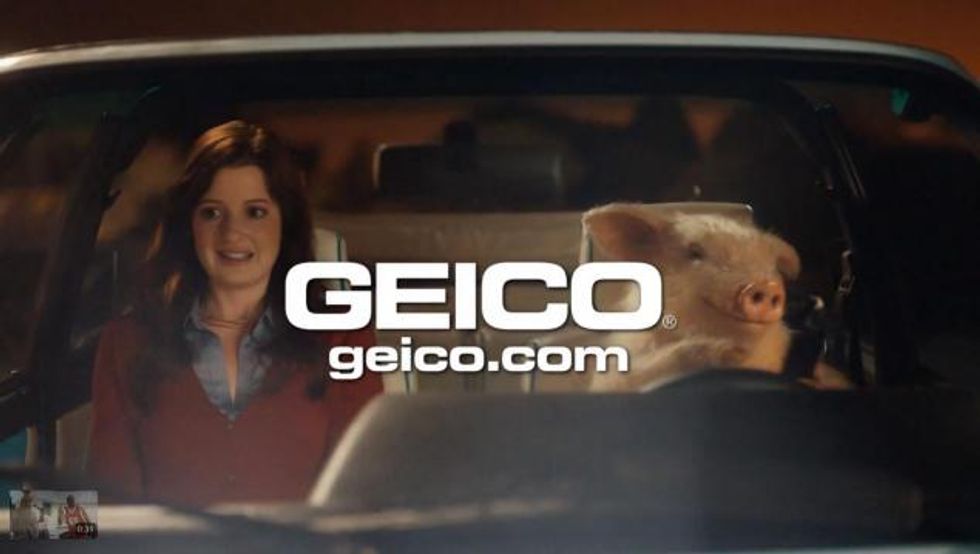 What are the three moms of One Million Moms yipping about today? Oh, just that Geico is trying toturn your little darlings into pig-fuckers, that is all, no big deal.

The moms behind such classic press releases as "How to declare victory over Ellen Degeneres in three easy steps" and "I kissed a girl (and I didn't like it)" have some thoughts on why you should not let your children fuck pigs, and neither trichinosis nor pig-fucking's obvious unkosherness seems to make the cut.

Maxwell the Geico pig goes on a date in Geico's new piggy commercial. In Geico commercial, the pig and a young female are in a parked car on a lover's lane. The car is actually broken down, but while sitting there the girl appears to be turned on by the pig. She hints that she wants to make out. She is disappointed when she learns the tow truck is on the way and they won't be able to "pass the time."

Geico has succeeded in offending its customers with this inappropriate advertisement. One Million Moms has received numerous complaints because Geico's new commercial plays with the idea of bestiality. Parents find this type of advertising repulsive and unnecessary. Airing a commercial with an animal in it will surely grab children's attention, but this is a horrible commercial for families to see. Geico does not have our children's best interest in mind.

The Geico Marketing Team may have thought this would be humorous, but it is disgusting to see how the company takes lightly the act of bestiality. Let Geico know their new ad is irresponsible.

Please send an email letter to Geico regarding their new "Pig on a date" advertisement and ask that they pull this offensive commercial immediately.

This is not the first time our friends on the right have warned us of the dangers liberals pose to our four-legged friends: You also should not fuck walruses.

Luckily, Dr. Ruth is around to bring her usual common sense pro-sexiness to bear:

A stretch, she says? Well she would say that. (Jew.) Let us close with the prophetic words of George Orwell, who saw all this nasty pig-fucking coming:

That is because they fucked the pigs and had little pig-man babies, and then they had the One Million Moms.